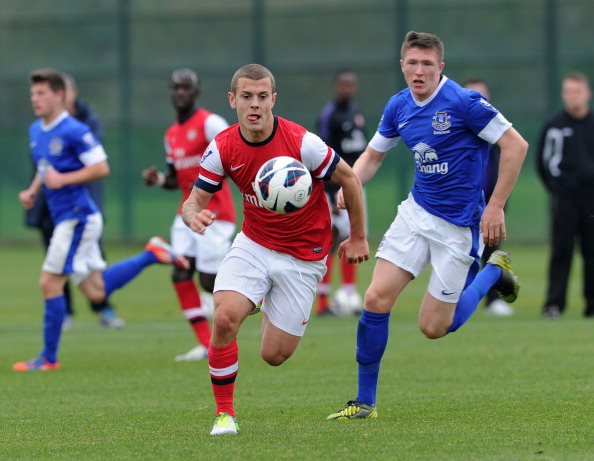 Jack WIlshere, Emmanuel Frimpong and Bacary Sagna reaffirmed their fitness credentials as they each played another 90 minutes for Arsenal’s under-21 side.

Terry Burton’s side, seemingly taking their lead from the first team, went behind early on against Everton before a brace by teenage German midfielder Thomas Eisfeld sealed the comeback and points for the Gunners.

Arseblog News didn’t watch the game but judging by the text commentary provided by the official site it looks as though Wilshere was an influential figure in the centre of the park. The England international played his part in the build-up to the first goal, directly assisted the second and earned himself a booking with six minutes left on the clock.

Having been on the bench against Norwich it wouldn’t be surprising for the boss to again include the 20-year-old in the first team squad for Wednesday’s  game with Schalke.

Unfortunately for Eisfeld, despite his two-goal salvo and the proliferation of first team injuries in the midfield, there’s no way he’ll be involved against his countrymen in midweek as he didn’t make the cut for the Champions League squad. Perhaps the COC clash with Reading is his best bet to further impress Arsene Wenger.

Details on the performances of Sagna and Frimpong are few and far between although they seem to have survived the trip to Merseyside unscathed.

Eisfeld could do what we want Ramsey to do. Actually score.

They seem to feel they had a good game – from what you can conclude from Bac & Frimpong’s tweets. Glad to have them fit and back in contention for the squad, need some depth and effective rotations if we are to avoid another Norwich display.

would also like to add – Happy Birthday to Le Prof. May he stick around for another decade+ and may his (and our) fortunes improve along the way!

Wednesday would be nice then saturday then tuesday again and so on and so forth. Come on Arsene, I believe you and we can do this. You didn’t build this awesome team only to watch it fail, you deserve a pat on the back arsene and the F.A cup and a top three finish should do for now.

The twitter feed from the dot com is disgraceful. 26 tweets in 90 minutes. Not one mention of Sagna once the game had started. The whole club needs to lift its game, including (or especially) the communications wallahs.

In fairness, that’s a tweet posted every three minutes or so for a Reserve game undertaken by a guy who, having travelled to watch the game at Everton’s training ground, had to have a match report finished for 30 minutes after the game. I doubt there are many clubs in the country providing such extensive coverage…

Plus the guy needs to actually watch the game!

Can’t wait to see him in the first team – something special about him.

One can not simply leave our #10 out of the team!

Hope Eisfeld and Gnabry play at the reading game, I’ll be there hoping to see some Jack magic aswell.

change the whole bloody team after Norwich. Let Coquelin Wilshere and Arteta play together. Send Cazorla to the wing. He plays there

Absolutely delighted to have Jack back. I think Ramsey has been disappointing in midfield. He has made an impact coming off the bench but whenever he has started he has kind of struggled.

Here we go again on Ramsay. He was more than decent starting against Olympiakos and West Ham, and he was no worse than 6 or 7 other players Saturday. As soon as we drop points the fingers are straight out pointing at this 21 year old kid. Give it a rest singling him out and support the young man

This is the umpteenth generation dat i find myself yet again relishing in wat d nearest future gunners would bring to the club. Akpom, Eisfeld, Afobe, Aneke, Gnabry, Wilshere, Denchy, SzCz, and i am all full of hopes again as regards what the future holds. Just hoping my umpteenth optimism does not get skewed by a corressponding umpteenth frustration. COYG!!!

The sooner we can get Jacky boy back in the 1st team the better! Not to mention the return of Sagna & Frimpong.

if there was any justice in the world, we would be the most successful team in world football!

self sustaining, we give youngsters of all age & nationalities a chance to be professional footballers, we make sure there isnt a huge disparity in the wages!

But unfortunately there is no justice.

There is plenty of justice, but life isnt fair. Neither is football. When you realise that life gets easier, but football results dont!

You might be interested to know that Phil Neville watched the game and said that Jack looked very good.

Okay Wenger, he is now ready. Unleash the Wilshere.

the jack of all traits.

I’d have Jack come back late and play the rest of the season rather than come back too soon and niggle his way through the fixture list.

He’s still not a proven player

I can see the game against Reading being a real thriller. We will most likely let in an own goal within the first 20 mins and then we can all see 11 reading players park the bus while Gervinho runs in circles around the defense and gives us 17 corners that we can play short.

nothing changed! I’m still the most expensive stadium seat

His name sake is what we will have to go with, for the time being

If we turb up for schalke like we did at norwich then we will certainly need jesus!

Eisfeld is very encouraging but I doubt we see him in any senior squad action till next season if that is, he’s not loaned out.

Good to see JW10, Frimmers and Sagna all playing for a good amount of time.

Overall Jack played very well. You could see what he brings to the side. Physically he looks in good shape. He’s becoming sharper as well. When he plays then we will definitely create more chances. But we have to be cautious with him and I’m not likely to play him against Schalke.

And that hideous picture. You’re scaring small children and the elderly.

Great to hear Jack got thru another 90 mins! Hopefully wenger puts him in the squad for weds night and puts him on for the last 20 mins if we are in a comfortable position in the match!

Arteta was taking shots at the defensive line when everyone who watched the game knows it was the midfield and attacking players who need to be urgent and attack more ,arteta too I’ve seen him pass the ball back to gk many times instead of pushing forward and trying to create a chance. That’s why wilshere is desperately needed back, he’s more of a box to box M.F, he can create in the final third and still take control of things in the midfield with alarming ease. So any news of an outstanding wilshere performance for me is like sweet… Read more »

Always thought we were playing for 4th only. But, I hoped something might be different this year. Saturday confirmed it’s not. We can’t win the PL or CL as the manager cannot motivate the team. Can’t see us winning a cup either. Ultimately other teams want those more and find us out at crunch time. Our lot only really see them as consolation prizes. Sad, but I think now, true. Need someone to shout loudly at these pampered, soft talent wasters.

Every morning in Africa, a gazelle wakes up,.it knows it must outrun the fastest lion or it will be killed. Every morning in Africa, a lion wakes up. It knows it must run faster than the slowest gazelle, or it will starve. It doesn’t matter whether you’re the lion or a gazelle-when the sun comes up, you’d better be running!…that is if you want you survive!.

Yap, and every morning in north london bunch of overpaid blokes wake up, drive to training ground in their cars worth bazzilion pound each, and since they know they’ll survive, don’t give a fuck about any race. Apart from Santos, that is.

Having seen the highlights, and going on the few opportunities we’ve seen him, Eisfeld looks like he could play a similar role to Freddie. Often in the right place at the right time, great finisher. Feeling v positive about him, without getting carried away

The chance to bounce back, hopefully with Jack ‹ Arseblog … an Arsenal blog

[…] Wilshere, Bacary Sagna and Emmanuel Frimpong all played as Arsenal U21s met Everton yesterday and ran out 2-1 winners thanks to two goals from the interesting German youngster Thomas Eisfeld. He’s not a player […]

» Blog Archive » The chance to bounce back, hopefully with Jack

[…] Wilshere, Bacary Sagna and Emmanuel Frimpong all played as Arsenal U21s met Everton yesterday and ran out 2-1 winners thanks to two goals from the interesting German youngster Thomas Eisfeld. He’s not a player […]