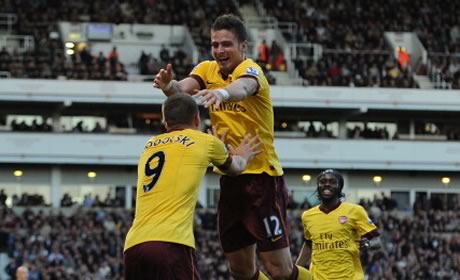 Olivier Giroud says that playing for Arsenal is a dream come true. Which sounds like the usual sort of thing a player says when he joins a new club and is doing the press that surrounds it, but a couple of months (and goals) into his Arsenal career he explained why he’s so happy at the Emirates and why he wanted to kiss Lukas Podolski.

Speaking to Sport Magazine, the former Montpellier man said he was keen to follow the trail blazed by so many French players before him. Legends like Patrick Vieira, Thierry Henry, Robert Pires and Kaba Diawara had all graced the Gunners pitch, and he wanted to do likewise.

“Since I was very young, I dreamed of playing for Arsenal because a lot of French guys have succeeded there and it‘s a a big club,” he said.

“Every year they play in the Champions League, and that was important in my decision. But also, I believe in this team and this squad. And I think we have a great chance to win something this year.”

After missing some chances in his early games, there was pressure on the £12m summer signing to start hitting the target, and with Arsenal 1-0 down at West Ham he found a great time to get off the mark in the Premier League.

But rather than hog the praise himself he was quick to acknowledge the great pass he received from fellow new-boy Lukas Podolski.

“I was so happy, I ran to Lukas and said: ‘Come my friend, I want to kiss you. It was a wonderful moment – I want to live more moments like this.”

We at Arseblog News applaud Podolski for his pass and his faithfulness. If Giroud had tried to throw the gob on us we’d definitely have let him. And have a squeeze of a moob too (but nothing else until a second date, we’re not sluts, you know).

After a great midweek goal against Spain he’ll return to the Arsenal ready for the Premier League with renewed confidence and eroticism, and who can complain about that?

Read the rest of the interview here.

He has a couple more tomorrow and maybe he’ll squeeze one in before kick off on sat.

Him and Arteta should interview each other in red velvet robes…

And can the interview be in sauna, a glass of expensive wine beside them.
Giroud: Why yes arteta
Arteta: certainly giroud,
Giroud: hmmh, hmmh….next i’ll do a hatrick.
Arteta: why you certainly should amigo…..hmmh.

Couldn’t help having a huge grin on my face when I saw Giroud’s reaction to his goal against Spain, was like a big kid.

Stop the slathering over Giroud, it’s embarassing. Your a football fan for facts sack, act like a man not a 13 yr old girl.

In other news, I saw some analysis about the cost of pies at different grounds. Excuse my cultural ignorance, but what is a pie? (I don’t think it is filled with lemon cream, or is that what people go for at football matches?)

What?….what dud you say?
Sorry, me no speaky bullshit.

*did….seems I too, know something about bullshit english!

You must be a laugh to have a pint with.

Is this serious or a really unfunny joke?

we are just joking around about the fact that Giroud is one handsome bastard. We are by far the best looking team in the Premier League.

Are you saying 13yr old girls can’t be football fans?

As far as i know blogger is not a 13 yr old girl, it is the internet i guess anything is possible.

Coq jokes are not bad, Arseblog is king, you’re sour….get square or get lost

And in blogs’ own words……”would you like a fucking refund?”

Google is your friend. Might be your only one here…

How sweet. He does like to plant his smackers on his team mates. There’s a YouTube vid of him going lip to lip last season.

Debuchy was the lucky recipient.

Different countries have different customs. To each their own.

From the picture, it looks like Podolski was having none of it………his loss.

I love that picture. I remember commenting on that to my wife when we were watching the game. Podolski was like “Yeah mean, I’m so happy you scored. But you’re a big fucker so don’t come jumping on me like that cause I’ll get crushed (as I’m staring into those dreamy eyes)!”

So did Podolski kiss him?

And is there footage of it?

Yet another scene in true blood that i’d so watch.
Get on with it now.

There’s going to be a lot of French Kissing going on at the Emirates this season …..

Wow I think now I want to touch myself!

Whoa…a bit of warning first, my wife just caught me looking at that link and is now giving me some funny looks.

This should get more exposure.

“What is he doing in the first one? Wait…does it matter? Carry on, Olivier.

I hope his wife isn’t the jealous type.

You forgot to mention the biggest French legend of them all: Pascal Cygan

I would shag the arse off Olivier, end of story

French legends like Kaba Diawara.. Oh well what ever.

If other fans come here they’re gonna think we’re all gay, but they just don’t understand the effect G-Rude has on a pair of balls.

Why would they think you are gay, surely you have not uploaded someone elses photo?

I knew he wanted to kiss podolski after scoring that goal , saw even podolski sayin control ,shit i should have mentioned it that day itself but thought it was just me who felt he wanted to.

Giroud’s interviews are never bland. I don’t know if it’s french translated to english, but he always pulls out some strange, over-the-top poetic imagery or something. There’s always a line in there that makes you think maybe he should’ve been an artist or a poet instead of a footballer.

I’m the first to admit that I will swoon when he kisses the trophy and later takes it home for some x rated business.

You forgot Sagna on the list of legends. That goal against s*urs makes him one in my book!

I would probably put Diaby in there too, for knocking Terry out.

Ah….yes he should shut up and enjoy the interlull just like the rest of us. NOT!, It’s goddamn interlull jack! Let the HFB roll.

He would turn your arse to stone with a glance.

the look on Podolski face says – what you say bro? woa you gotta slow down on the kiss talk dude.haha

I am Sancho….
Are you Sancho? No you are not Sancho…you are Giroud.
but i…am Sancho…

Too much talk from Giroud IMO, he should concentrate on the pitch and let his football talk for him. Starting to sound like the greatest striker that ever lived.

Just because he talk doesn’t mean he is so ego like your beloved Bendtner. You’ll eat your own humble pie once he scored 15 goals at least this season. Mark my words

Tuesday club is fucking gold, as is the Arseblog. such good company being a gooner.

Wilshere & Giroud can kick this team on to another level | Gunnerblog

[…] strikers goal, playing a one-two with Lukas Podolski before toeing the German’s cross home.  It’s clear he’s feeling a lot better about things, and he continued his momentum with a crucial headed equaliser for France against Spain in midweek. […]

He is a legend in the making…

[…] of not dropping a points. Giroud will surely be high on confidence after that goal, and admits he wanted to kiss Lukas Podolski, as well, after scoring against West Ham couple of weeks back. As the comments suggest, most would […]

[…] of not dropping a points. Giroud will surely be high on confidence after that goal, and admits he wanted to kiss Lukas Podolski, as well, after scoring against West Ham couple of weeks back. As the comments suggest, most would […]

I strongly believe that the best is yet to come from both of them. You can see on the pitch they have a connection. Tomorrow night we need both of them to click.