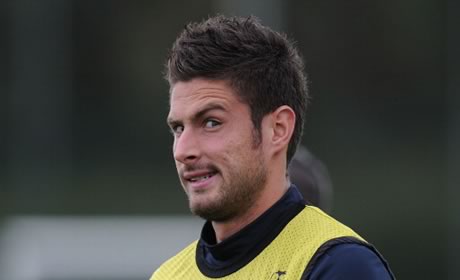 Steady on ladies, and gents (let’s face it), but the Handsome French Bloke doesn’t want to wine us, dine us then nuzzle our bits, he’s talking about scoring goals.

Giroud got ten minutes last night and could have scored twice but such are the machinations of life on this particular plane of existence that it’s not happening for him yet. In one of the many other dimensions he’s already got 8 goals, including a hat-trick against Chelsea (one of which came when he kicked one of John Terry’s testicles into the North Bank), so we just have to wait for the inter-dimensional crossover and all will be well.

Some suggest the £12m summer signing is worried, anxious about his lack of scoring, but no. He’s not worried. Do you know how we know? It’s because he said so.

“I’m not worried,” he said. Told you. Of course he said more about his current situation and not only is he not worried, he’s also confident. Proof?

“I am confident”, he said. Why do you doubt us? Arsenal fans will be hoping that the former Montpellier man pops his Premier League cherry on Saturday against West Ham, but Giroud says he’s not worried about the pressure.

“I feel good in this team, and I assisted. It’s okay – I will continue to work harder and to score and to give a lot of pleasure to our fans.”

And he’s sure that despite some missed chances it’ll happen for him, and thanked those at the club for their support.

“It’s quite difficult to adapt to the Premier League. I’m always close to scoring, so I continue to stay confident. I try all I can but sometimes you need to keep the faith and keep going.

“Sometimes when you are a striker it is difficult. I feel very, very good in this city and with my team-mates and the people who work in this club, a very big club. I want to mature here and keep going.”

We too want him to mature, like a fine wine, a beautiful cheese or a bowl of stew that tastes better the day after you made it because of the stew magic that happens when you leave it overnight.

For now, we must attend to a match report for Parallel Arseblog News in which Olympiacos were not only beaten but then devoured by Gunnersaurus who is, in that place, a real life velociraptor (he has been handed a 4 game mascot ban by UEFA too, poor fella).

You can pleasure me any time Olivier~

That was the best article that’s ever been posted on here. And the picture is stellar as well.

I think Arseblog was kinda high when he wrote this, in a good way though. He’s like sparkly happy, playful, talks of wine and a bit floopy I guess, high pictures come to mind… hehe

Am I the only one who has noticed how enormous his nose is?

I’d lick some honey off of that nose any day, and I’m not even gay.

Speaking of pencils, I had a really good pencil joke but forget it, it’s pointless!

Mrs Bendtner's Greatest Son That Ever Lived
Reply to  George

It’s hardly disproportionate to his face. Which, praise the lord, is fairly large…

There’s still plenty of meat on that bone. Now you take this home, throw it in a pot, add some broth, a potato. Baby, you’ve got a stew going.

Only 5 comments in, I was expecting more. Well played, sir.

I think I want my money back for that weekend stage-fighting course.

Let me tell you a little story about acting. I was doing this Showtime movie, Hot Ice with Anne Archer, never once touched my per diem. I’d go to Craft Service, get some raw veggies, bacon, Cup-A-Soup… baby, I got a stew going.

I just want my kids back.

With a headline like that, who wouldn’t wonna read Arseblog News?!

Have you been drinking again?

Bloggs: we are not worthy.

That was a brilliant article. Excellent writing.

I’m a big Platini fan, but banning Gunnesaurus makes him an interstellar cunt.

Blogs, are you drunk?

Possibly, as I meant to reply to Yellow Ribbon.

You know this article was written as an excuse to post that photo. Think that’s OG’s o-face?

we have to be really patient with the dude,he will come good!

i have come good…. Thats a photo of Girouds reaction to it.

It appears that I can’t think of anything more constructive to say and my brain has shut down…. roll on Friday

Stamford the lion only got a 2 match ban for devouring Juventus and he was allowed put it off until after the Nordslsellelland game… which in hindsight was probably quite silly, as the only non-devoured teams remaining in that group are chelsea and shakhtar.

but anyway, lets keep on arsenal here. i dont want to be talking about chelsea too much. that’s just pointless…. i just know Gunnersaurus is going to be gagging to get out there on the pitch. he’ll hate sitting in the stands!

… now where did i leave my keys?

Yeah he can pleasure me as much as he wants. On the pitch, I mean. 😉

He wants to pleasure us with his balls

“Sometimes in football you have to score goals”

I’d put giroud in the gunnersauras costume and really play with him. Then when i’m tired I play with him some more.

Giroud certainly makes me come good. Can’t wait til he returns the favor.

Technically, it should be you that is returning the favour.

“The Coq” in midfield…Santos at the back who likes nothing than the to the celebrate a win with the “Gays”…now Giroud up front sating he wants to “Pleasure us”.

We need SZCZ to come out and say “…I actually injured myself athletically banging a page 3 stunnah over a coffee table” to add some heterosexual yang to this increasingly mincey ying that is beginning to plauge our team.

It’s quite remarkable how much this team speaks innuendo. It would be the TV parody of a sexed up squad. At some point, I picture Frimpong and Wilshere giggling over the “help” they gave Olivier with English.

You know SZCZ would use the word “pole” in such a statement, right?

When he finally scores, I think the consensus is that his celebration shall be dubbed “The French Tickler”

There is nothing wrong with the way he plays. First, he is is only given 15-20 minutes on the pitch and everyone expects him to score?….common. Second, he is providing assists which lead to goals and win games……..Now for 15-20 minutes on the pitch he contributes more than most in 90 minutes. He has missed a couple, and most were excellent saves by the goalkeepers. Van Persie spent 8 years with the club. One stellar year, considering the entire team was only passing to Van Persie. Bottom line, leave Giroud along and goals will come….lots of them.

The problem is many of us think he’s a pleasurer of himself.

When giroud finally scores i’ll destroy my wife in bed.

But will she be thinking of Giroud?

Maybe, but Des definitely will be.

This guy will be great. He’ll start to score for sure, but he is already playing some great stuff IMO, energy, making great runs, moving off the ball, his knock-down and pass to Ramsey for his goal, etc. He’s a handful for any centerback. Anyone comparing him to Chamakh is clueless, more powerful, better athlete, better footballer all around, and seems to have the balls for the fight. Just needs a run of games. And he wants to pleasure you to boot…

This picture clinches it: he kind of looks like a butch David Tennant.

Kate
Reply to  The Upbeat Gunner

See, I think he looks a lot like James Roday from Psych.

The Upbeat Gunner
Reply to  Kate

Take the average of both and you’ve got our Oli.

YES! I’ve said this from the signing- Shawn Spencer after the gym! I think the women on the program are all over Shawn because they think Giroud is slumming it in California.

This article made my evening. Funniest I’ve read on here.

I think more should be made of the chances the whole team seems to create with Giroud on the pitch. The lad pulls defenders (steady on) out of position with great attacking runs and his final third passing is very strong. Let’s give him a run of games.

Brilliant article! I really have confidence that Giroud is going to score against the hammers infact I think he will get 2 goals if he starts which I hope he does.

If we all stop talking about him not scoring then it’s not an issue.

He is a good player in my opinion. With good finishing to his mesmeric movement, he could be unstoppable

Giroud, I want you to say:”We must win” rather than “I have to score”. The first can mean everything.

Fact: Giroud has scored 14 goals in his first season at his last 3 clubs

Hmmm…..still waiting and hoping for his first goal because I believe in LOOOVE! ℓ‎=))ℓ‎​​​

Just kidding there. I believe in him, from the way he plays you’ll know he is determined.

A superb piece of journalism! Thanks Blogs. Keep up the fine work.

We have OXTV. At this rate, I shudder to consider what OG TV would be.

[…] forward, but he still has to sign the ting. Mr. Sexy, Olivier Giroud, has stated that he wants to pleasure the fans, and we can have a collective orgasm if he nets a goal or two today. With the physical threat West […]