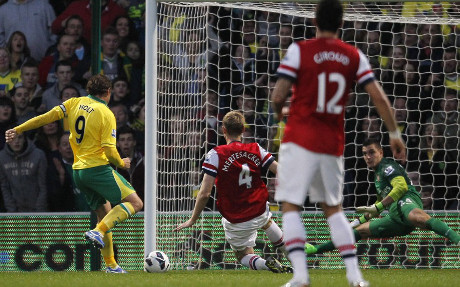 I really should have done this in just 15 minutes, that’s all it seems Arsenal gave.

We think santos forward runs resulted to nothing!.

But we did learn something. Santos can be very reliable when playing someone onside!

Well holt was offside even if it was marginal.Yes you look across the line and say santos should have come forward to play the offside trap but there was other opposition player making a run maybe benett and the guy who decided to shoot could have easily slipped in a pass which could have resulted in goal as well.going behind didnt matter but not to fight back to get in lead did.

U missed the main number of all

And
10 points behind the league leaders
b4 u all. jump on me. i am one of the few that actually goes and desrves a voice

0 = percentage effort put to get back level.

Shocking display today. These are the games where we need one of the players to produce something special with individual skill. Hopefully this is just a blip and nothing more sinister.

must’ve missed it, still, wasn’t his usual self unfortunately!

Our injuries hurt us today. 1) Szczesny. Arguably, Szczesny holds or parries that ball without a problem. 2) Gibbs. Lots of miscommunications between Santos and teammates. As least for now, Podolski/Santos down the left doesn’t look nearly as sharp as Podolski/Gibbs. Plus, it was Santos who played Holt onside for the goal. 3) Diaby. We missed his drive going forward from deep midfield. Ramsey had a rather lacklustre game. 4) Walcott. His willingness to be direct and his speed might have quite useful today. 5) ??? I don’t think it’s too much to ask that a big club like Arsenal… Read more »

City’s comeback today. Unimaginable for us at the moment. Sad.

Painful, painful game to watch. It was obvious our players underestimated the opponents, something that’s become a regular occurrence when playing lower quality teams (no offense meant to Norwich). In order to be in the title race we HAVE to win the easy games. I hope to see some passion and some sort of energy in place of the lackluster, lethargic crap in the next game.

We are not in the title race. We are in 4thrace. Maybe. 🙁

3 – number of the minute I had a bad feeling about this game.

today we learned we won’t win the league

Seb
Reply to  50 Shades of Ramsey

Mate your not being realistic, I would like for this season the fa cup, and then build on it

Lapidarij
Reply to  50 Shades of Ramsey

Today? You are very slow. 🙁

Where is the problem?

– we have only one striker

Blaming injuries is a distraction, though, isn’t it? Chesney yes we certainly missed. The rest? Kos wouldn’t have started (and wouldn’t have prevented that goal), Sagna hasn’t been missed all that much due to Jenkinson’s excellent form, Diaby is more of a bonus when fit rather than a loss when injured, Gibbs I’ll give you but Santos wasn’t as bad as others make out, Walcott and Chamberlain yes – neither started, but would’ve added a threat, for Rosicky see Diaby. The fact is we lacked something up front. We’ve had that problem in earlier games this season, and we’ll have… Read more »

I would like to see Arteta play further up the pitch in a more attacking role when the team shits the bed and need a goal, similar to how city play yaya when they are chasing a game.

It looks like a replay of last season. Can Arsenal claw back 10 points? Impossible not with with this lot of players. I am afarid the most Arsenal can win is the FA cup.Forget the cl. I tell you whta. Our gk is one or two grades below the top guys like Czech,etc.Defensively we have been found out at set pieces and corners. The gunners seem to be unable to score from corners.Why is this so?When we see other teams scoring regularly from set pieces and cornerss,you wonder why. I think the gunners are too predictable and one dimensional. That’s… Read more »

A draw against QPR and despite all the early-season optimism about a title challenge, we’ll be in the exact same position as last season–13 points out of the first 9.

Around this time last season (from fixture #8 to fixture #15), we took 22 points out of 24 possible. It’s looking increasingly unlikely that this year we’ll be in as good of a position points-wise as last year after game #15. A depressing thought.

“I am afarid the most Arsenal can win is the FA cup. Forget the cl”

I assure you sir that the c.l was no where near my imagination in the first place…

And i really didn’t see anything of what jenkinson offered in terms of attack. The walcott-sagna combo seems more effective than the current jenks-gerv/chambo. Jenks is not a risk taker and sometimes to win games you need that. Many times i’ve seen gerv beg for the ball between two opponent players but jenks never releases him for the through ball he’ll instead play it right back to mert. Not that it’s bad but does he have to do it repeatedly everytime? Ramsey- was arsenal today. Whatever blame you put on him it’s shared right across all the players on the… Read more »

what did you really think of Andrei Arshavin’s game when he was on the pitch?

He looked to be trying hard, but there was disorganization in the team when going forward so it was hard to be an influence. Saw him running back and correcting his errors as well as battling for the ball, trying flicks and driving the team forward.

I’d like to see him play the middle against Shackle instead of Cazorla .. just so the lil Spaniard can get a breather. And I still think the lil Russian has it in him.

To me arshavin looked disgruntled when in possesion, seemed to be struggling to get his footing, his passing for the time he was on the pitch was frantic and he never really looked that cormfortable. Whether he tried i’ll never know, the only player i think tried were gnabry amd arteta. For Arteta he tried to offer more attacking options for us as cazorla was always stiffled between two, three yellow shirts. Just his usual self + a bit sense of creativity. Gnabry you could see he really wanted to get on with things. Whether arshavin comes good?, i’ll never… Read more »

I don’t understand the park-the-bus business. Weaker teams whether it’s home or away park the bus. So why are we the only teams who can’t give them a ticket? United, City, Chelsea face the same problems but they bulldoz that bus over… We on the other hand are clueless. Ah! We also make sure we don’t have a bus in our parking lot. It’s time we address players like Santos, Verm, Ramsey as players who need to really improve. They are hardly the Rambo, Verminator or a Maverick on the field. We like to be called the big club but… Read more »

Walcot, the only player we have off the bench who is capable of changing a game and offering something different.
And he will be sold like many before him in January.
We missed him yesterday. The thought of arshavin coming off the bench in a cold Wigan come February doesn’t feel me with optimism.

We were missing much more then just Walcott yesterday, but yes… him too. And truth is that WE ARE MISSING much this season… again.

It’s really hard to go through the fixture list and think ‘oh, that’s going to be a tough game’, every single fixture. Just because you know we are able to switch off and/or self destruct every single time.

One thing av learnt about arsenal is-“just watch a match but dont expect a win,wat ever result u get at 90mins dat’s it”..we fucking suck,big team my ass!!..i hrd an headache bcuz of yesterday annoying match.

8 – The No. of Points Not buying a Ready made replacement of The Dutch Skunk and not getting an experienced Back up Keeper has Cost us. Details :- 2 pts – Sunderland Home (Giroud’s Sitter) 2 pts – City Away (Gervinho’s Feet full of Lead) 1 pt – Chelsea Home (Giroud’s Shot after rounding Cech) 3 pts – Norwich Away (Goalkeeper and no proper Striker) 8 – The number of continuous Games we have failed to keep a Clean Sheet after keeping 3 in the opening PL Fixtures. So much for the BOULD EFFECT. 3 – The Consecutive number… Read more »

Spot on mate. I believe the biggest change that we needed from last season was to stop conceding needless goals as we can no longer ‘trade blows’ with our opponents by outscoring them. Although we are not conceding many the few we are, are absolutely needless compounded by the fact that hitting back and nailing a sucker punch is a bit of a problem. i don’t know whether the best solution is to play Gervinho up front but we need to solve it in January. The Podolski thing is wierd, because he is willing to cross it quick rather than… Read more »

3- The number of players who fancied playing after an 18 minute flight.
Jenkinson,Arteta and Per.The rest seemed to have jet lag.

hi rucon gooner you are right

1 – number of game plans Wenger has, no plan B

Man United was scoring against Stoke in their usual fashion, quality cross and header. Goal! Even Rooney looks so dangerous when cross comes although he is not the tallest of them. Whereas in case of Arsenal, even Mertesacker is struggling to cause any problems offensively on set pieces. It seems that Arsenal players are told to score only beautiful goals (although it depends on one’s perspective what’s a beautiful goal for one? For me its a thumping Vermealean header or a 30 yard Chambo screamer than a patiently well worked goal involving 30 passes in the buildup.) To be a… Read more »

I have also thought this for a while now. We need to score goals not just clinical goals but even the ugliest of goals.

summary of my feelings about the team after the game?
‘Rubbish’

How much you wanna bet Arteta will give an interview this week where he proclaims, “Not good enough,” when even Arsene wouldn’t quite say it. Seriously, love this guy because he’s ALWAYS the one who gives a shit (and will admit when we’re playing like absolute shit.)

hi guys we should have done better because they were comeplietliy flat but we can beat qpr today im going to watch the qpr math and i will tell the final score.