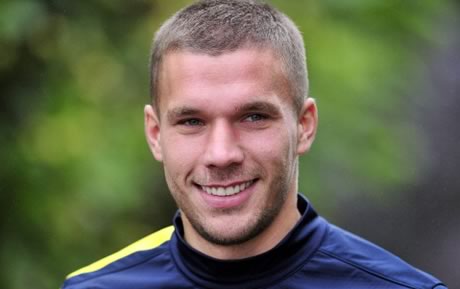 Lukas Podolski has warned his Arsenal teammates not to underestimate tomorrow night’s opponents, saying that Schalke will provide the toughest test yet in this season’s Champions League.

The German international knows the opposition well, having just moved from the Bundesliga this summer, and he’s well aware of their qualities.

“Schalke is a very strong team, the strongest we will face in the group stage,” he said.

“If we can win this game we will be very well placed. Schalke are a good team though, they are something special at home, with their fans behind them, so we will want the three points at home.

“I know their coach, Huub Stevens, very well because he coached me for a season when I was at Cologne. They will be tough to beat, but we must go for the three points.”

Despite being taken off against Norwich on Saturday with an ankle problem, Podolski is hoping his recent good record against Schalke will see his name on the scoresheet again.

“I think in each of the past two or three games I played against them I have scored, so I quite like playing against them. Hopefully I can do it again in the Champions League.”

Meanwhile, Arsene Wenger has praised Podolski for the way he’s settled into life at Arsenal and what he brings to the team.

“He has a very friendly attitude and works very hard,” he said at the press conference earlier. “He’s a team player and I think you can’t lie to the crowd. He’s very happy here.  He’s a good voice to have in the dressing room. He has been received well.

“He’s ready for every game. He’s played very well for us until Saturday. On Saturday he was a bit less effective, like the whole team. We are very happy with him. He works very hard for the team.

“He scores goals and makes goals. Tomorrow there will be a little more pressure on him but he’s used to that. He’s got 100 Germany caps so he can handle it.”

In the press con Le boss (french) just answered german reporters in german!……take that you other monoglot managers! …….and xavi!

Tomorrow night is going to be one of the most important games of the season. Shalke are very well organised and have threats in more than one area of the pitch. We HAVE to bounce back from a dismal weekend, I’d say we have to win convincingly to make the weekend past seem like a small bump in the road. IF we don’t win both of our games at home this week I’d go so far as to say we can kiss goodbye our hopes of a trophy this season. Which in all honesty I think already look slim. But… Read more »

As long as the right Arsenal turn up, we’re gonna be in for a good night i think

And this is what worrys me…..

And at the same time what pleases me…..

but also get your own damn username

The lack of Champions League football has not prevented top players from staying; at or even joining other clubs. Money is the main motivation – provided that the player – and his agent of course – are happy with this- the CL is not the big deal that some claim. that it is regarding signing players. Only one team can win it anyway – and all but two are eliminated before the final. I think we will beat the German’s with home advantage – but we need to concentrate on just doing that – and not to get sidetracked into… Read more »

Champions League football provides money to clubs like ours that we desperately need to compete.

Lack of Champions league football gives players another excuse to leave a club even though it mainly is about money. How many players have left clubs citing that reason, I think a certain Mikel Arteta said the same when he joined us (even though I think that was genuine and less of ‘an excuse’)

So many players who have never experienced European football at the top level cite that as an ambition and a reason for joining a particular club.

I don’t think that CL football would have stopped Hazard and others from joining Chelsea – or that any players would have left because there was no CL.
It might be an attraction to some players to join clubs like spuds who are not in the CL regularly .
I don’t believe that us missing out on the CL for one season would be the big crisis that some claim.
IN FACT IT MIGHT EVEN DO US SOME GOOD BY FORCING THROUGH THE CHANGES THAT OBVIOUSLY NEED MAKING .

I agree with Jeff on this one!
Robinho(remember him) & Tevez joined City without City being in the Champs lge!
But financially for Arsenal, it would be a significant blow.
Think about it, we’ve qualified for champs lge for the last 16yrs, yet we still have to sell players to break even.

I can only imagine what would happen if we don’t qualify for Champs lge, we would probably sell Gunnersauras too!

I think the cobwebs from Saturday’s game will have been shaken off and the boys will definitely be up for the game, especially at home. Podolski & Giroud need to take a few more chances on goal.

Santi Cazorla is feature in the guardian gallery this week.

With all due respect to Norwich, the team knows they are playing high quality on Wednesday. therefore, I believe they will play the level we all know they are capable of playing at.

Glory Hunter, you make a good point about the financial effects that us missing out on the CL cash would have.
For starters slippery Ivan would struggle to justify paying himself another big bonus .

[…] to be any kind of expert but Lukas Podolski, who obviously knows more about them than most of us, says: Schalke is a very strong team, the strongest we will face in the group stage. I know their coach, […]

[…] and break on counters with their pacy players, much like Olympiakos tried to do. Lukas Podolski has already warned of Schalke’s […]