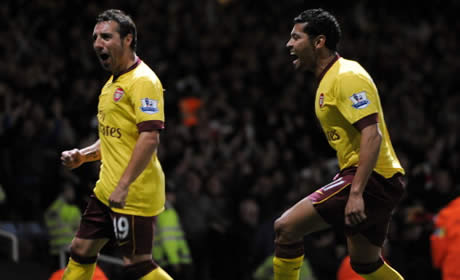 When Santi Cazorla turned and launched his shot into the top corner of the West Ham net late on Saturday evening, you’d be forgiven for thinking he was one of those players who left feet are often refered to as ‘cultured’.

This usually means that the right leg is simply for standing on, not kicking a ball, but given this was the Spaniard’s so-called weak foot it was an impressive finish.

Arsene Wenger has likened Cazorla to one of his former charges, Glenn Hoddle, who he managed at Monaco. While Arseblog News is reluctant play up any comparisons with the Sp*rs-associated, ridiculously-haired numbskull, the manager’s words ring true when discussing the quality of the summer signing.

“He is right-footed but, when you watch him play, you don’t know that. We had Glenn Hoddle and he was like that – left, right, you could not say which was strongest and Cazorla, on that front, is similar.

“I don’t remember anyone else I have worked with who was as much as that two-footed. Cazorla makes everybody a better player.”

Cazorla’s goal sealed the game for Arsenal and Wenger says belief is growing within the squad after another solid away performance.

“We started with a lot of questions raised about the team. We have now played seven games and the belief in the squad is that we have a chance. Of course we now need to do it week after week. The spirit and quality are there. It is about how consistent we are now.”

With nearly two weeks off now until the next Premier League game, the manager will be hoping his charges come back from their various international duties, ready to pick up where they left off.

Arteta: Managers and players need to live with comparisons

Watching him play just gives me the utmost pleasure. The guy can turn free play into attack just like that!.
Santi….
He shoot with his left
He shoots with his right.
Much to everyones delight.
A santi in my team!, boy this is just great!

funny i thought Arshavin was pretty good on both feet as well.

The only other player who’s deadly at both feet was Ronaldo (the phenomenon), but he’s a God.

There is no god

Morgan Freeman would beg to differ….

Perhaps there aren´t any gods, but surely there is a God. (Wrong place for philosophy of religion maybe?)

Ronaldo is a god or Cazorla is a god? Not sure whether to thumb this up in agreement or thumb it down because you claimed Cristiano ‘the neck’ Ronaldo is a god…..

the fact that you didnt know that Brazilian Ronaldo was referred to as ‘il fenomeno’ means you get a thumbs down from me mate!

And worse still, do u actually believe any gooner would label Cristiano Ronaldo a god?!?!?!?
I wish i could give you 2 thumbs down lol

As of today, you can thumb it up, thumb it down and give it a 3/5 if you wanted.

Is that all the thumbs down I get? You lot are getting fat and lazy around your mouse finger.

Hey. Ronaldo’s good and all, but he’s no Bergkamp.

Pong of the OxCoq
Reply to  Wenger's Glasses

Talking about two footed players, the deadliest strike force I have witnessed was Ronaldo & Romario playing together for Brazil…

Santi is better than Ronaldo because he plays for The Arsenal.

Goddamn interlull, 2 weeks without my little Santi! Looks like i’m going to have to go back to the needle to get over this trauma!

If you look on Wikipedia under ‘Ambidextrous’, him and a few other players are mentioned, it’s very interesting

Great trivia, but how on earth did you ever go to wiki and search for Ambidextrous and then read it through to see Santi was???? Brilliant non the less

i assure you, Santi is much better than me

Santi cazorla, he reminds me very much of fuck all!. He’s just unique in his own way, no comparison o’ anything he’s just santi!. A signing like no other for me, a great guy.

Santi……
He shoots with his left
He shoot with his right.
John terry is still a cunt.
This poem doesn’t rhyme.
Nasri is one too!

There must be a way for both Santi and Arteta to play actively for Spain enroute winning the 2014 world cup for Spain. Wenger, you genius! I sure didn’t see the design. Undercover agent Song, in the last training before the last dead rubber game of season 2013/2014, gives both Busquet and Xavi a fracture. Don Arsene, Well done!

Fuck Spain.
They play for The Arsenal, we don’t want Santi and Mikel in the same team as those cheating cuntsalonas and Mourinho cocksuckers.

His size, ball control, vision, etc…. dare I say it the only person playing right now that he reminds me of is Messi. His balance is damn near perfect. I only wish he had just a tad more attacking mindset in terms of going for goal. I do think we’ll see that eventually though. He’s a very unselfish player and he is the best signing Wenger has made since Henry!

Add Wilshare to Carzola in Nov and we shall skin someone!!

When you look up ambidextrous on google its asks did you.mean Santi Cazorla! What a player though seriously. Hes a more than capable replacement for Cesc in my opinion

Sorry, you’ll have to narrow it down a bit 😉

This from garth crooks team of the week on BBC website…

Did you know? Santi Cazorla has scored more goals from outside the box than any other player in the top five European leagues since Aug 2011 (nine).

Thats good news for arsenal, keep it up

You’ll be waiting a bit then… Szcz has a few weeks to go, and we don’t know when Wilshere will be first-team ready…

Also, no Jenkinson on the bench?

A Cardiologist died and was given an elaborate funeral. A huge heart covered in flowers stood behind the casket during the service.Following the eulogy, the heart opened, and the casket rolled inside. The heart then closed, sealing the doctor in the beautiful heart forever.

At that point, one of the mourners burst into laughter. When all eyes stared at him, he said, “I’m sorry, I was just thinking of my own funeral…….. I’m a Gynaecologist.”

the Proctologist (one who deals with disorders of the anus,colon and rectum) fainted!

That’s funny. But maybe just a little bit off topic.

I like how you made sure to explain what exactly a proctologist does. As if…

Why does Cazorla always smile on the pitch?

Because the grass tickles his nuts.

This website uses cookies to improve your experience while you navigate through the website. Out of these, the cookies that are categorized as necessary are stored on your browser as they are essential for the working of basic functionalities of the website. We also use third-party cookies that help us analyze and understand how you use this website. These cookies will be stored in your browser only with your consent. You also have the option to opt-out of these cookies. But opting out of some of these cookies may affect your browsing experience.
Necessary Always Enabled
Necessary cookies are absolutely essential for the website to function properly. These cookies ensure basic functionalities and security features of the website, anonymously.
Functional
Functional cookies help to perform certain functionalities like sharing the content of the website on social media platforms, collect feedbacks, and other third-party features.
Performance
Performance cookies are used to understand and analyze the key performance indexes of the website which helps in delivering a better user experience for the visitors.
Analytics
Analytical cookies are used to understand how visitors interact with the website. These cookies help provide information on metrics the number of visitors, bounce rate, traffic source, etc.
Advertisement
Advertisement cookies are used to provide visitors with relevant ads and marketing campaigns. These cookies track visitors across websites and collect information to provide customized ads.
Others
Other uncategorized cookies are those that are being analyzed and have not been classified into a category as yet.
SAVE & ACCEPT
wpDiscuz
48
0
Would love your thoughts, please comment.x
()
x
| Reply