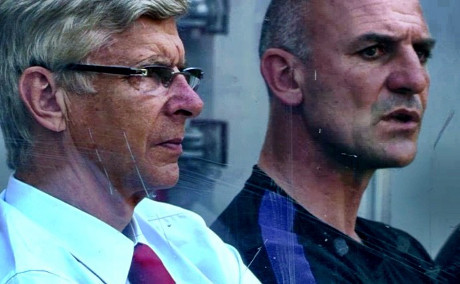 Although Arsene Wenger is banned from the touchline and communicating with his team for tonight’s game with Olympiacos, the manager says he and Steve Bould have done plenty of preparation to cover all eventualities.

Bould will take charge of a senior team for only the second time tonight but will go into the game well prepared after discussions with the boss.

“Myself and Steve Bould will talk about all possibilities before the game,” Wenger told the matchday programme. “We’ll go through various scenarios and of course I’ll leave him room to make decisions too.

“So we try to plan and sort out the maximum solutions, but he also has lots freedom in the situations we have not anticipated.”

And although Bouldie might be new at this level, the boss has backed his years in the game to see him through.

“Steve is new in this particular job,” he said, “but he has played a lot of football. He has coached a lot too. Even if he is new to this level of coaching he is still very experienced in football and understands the game very well.”

Let’s hope there’s nothing too challenging for him tonight and that he continues his 100% win record as the man in charge. Yes, 1 win out of win is still 100%.

The Arsenal matchday programme is available to download on iPad and it’s quite excellent – click here for details.

Lets get those 3 points!

I believe if giroud starts, he’ll defo score.
I have a good feeling about this one.

‘good feeling about this one’ = Roy Carroll in goal

Giroud will destroy those greeks. G, I hope thats not roud.

“you can talk about certain situations.. if he gets injured what do we do..”

AW: So Steve, lets say you are the manager, and a key player suffers a serious injury, what do you do?

SB: Maybe bring on a like for like substitute, then in the longer term ensure we have the squad depth to cope with injuries.

AW: Because that is exactly what they are expecting us to do

What
Reply to  arseblog

I’ve taken this joke too far.

Haha! I don’t think I can remember the last time Wenger made a like-for-like sub.

Wouldn’t be suprised if he took off our striker and replaced him with another goalkeeper… “Take that Olympiacos! You are bamboozled!”

[…] Wenger will of course serve the second of his 3 match ban tonight, however, there should be no cause for worry or breakdown in communication, with Steve Bould taking matters into his own hand on the […]

That pic can easily pass off as a poster for some hardcore action flick.

‘The Brave and The Bould: Greek Mission”

I would cast Steve as the lead, Wenger as a head of ops character, and call the film Boulder. And, the second Boulder II: Bolder.

Wenger would be cast as the money man called ” The Professor” who takes the jobs for clients and has his man “Bould” carry out the orders. It would do well in theatres!

There is no point even playing this game, it gonna be just another game when giroud fails to score and it will just knock his confidence even lower, we wont win the champs leage, at the rate this season is looking I cant even see us getting out our group.

ARSENE OUT WE NEED A WINNER TO MANAGE US!

SO many typos in your message. For everyones sake, I’ve edited it…

“ARSE OUT, I NEED A WIENER TO MANGLE ME!”

If you think we have a chance you are just another deluded Arsenal fan, I wish everyone would be more realistic and realise we are just an average team now,

And Big Dave, no typos in this

“WE ARE JUST LIVERPOOL IN DISGUISE”

Buy yourself a C.D my friend, if you’re gonna act like a dick! You might as well dress as one!. Out!

“Tom the… Gunner”? Hmmmm. I think not my friend.

Good luck to you in your trolling endeavours elsewhere.

Ignoring the above. COYG!

With a relatively easy run of games wenger should put giroud in and tell him he will play from the start in the next five games whether he scores or not. this would take the pressure off him and i believe he will bang in a few goals.

Almost everyone outside Arsenal is saying that this should be an easy banker. I reserve that opinion as ‘these type’ of sides seem to be stepping up their European game this season. This could be a toughie, but we should pull through in the end.

A clean sheet would be fkin nice.

Has the squad been published somewhere? Just want to see if Arshavin is on it and who else might take Diaby and Arteta’s place.

Two quotes on arsenal.com at odds with each other: This from the Boss: “Basically it is the same team at the back from last season,” said Wenger. (…) if you analyse their team it is 90 per cent the same as last season.” http://www.arsenal.com/match-menu/3553335/first-team/arsenal-v-olympiacos?tab=preview This from Michael Cox: “It’s only a year since Olympiacos last visited the Emirates for a Champions League encounter, but this is a very different team – it’s likely that only five of last year’s starting XI will begin this match.” http://www.arsenal.com/news/news-archive/45275/scouting-report-arsenal-v-olympiacos Who’s right? By the way well done Arseblog for being the Talking Head of… Read more »

It could lbe that the 4 defenders and the ‘keeper are the same. That would sort out Arsene’s and Michael’s quotes.

We’re playing horribly imo, our defenders are still reckless and i’m not happy.!

Completely agree, complacent and half hearted effort from too many reds so far. Fucking sort em out Bouldy!

Was just watching the Man City game (pure accident, I swear!) and saw the camera pan to Shinji Kagawa in the stands…..next to RYO MIYAICHI!

1. Why is Ryo in Manchester?
2. Why does he consort with dirty United players?
3. Why is he even in that damn dirty stadium?

Dear God! If he keeps hanging with those types he’s going to return from loan demanding 2 million a week!

Probably nothing but thought it was humorous nonetheless. 🙂

His mum looked up Wigan on the internet and made Shinji promise to look after him in between games as James McCarthy and Gary Caldwell are a bad influence.

Are you serious? That’s mindblowing, man. Thought Ryo was Costa Rican and played sunday league cricket down south, me.

Arsenal 3 Olympiacos 1: The Gunners Gain a Stronghold of Group B « Gooner Daily

[…] A response was needed after that disappointing showing against Chelsea and as expected, Arsene Wenger was sighted in the director’s box with Ivan the Terrible (also had a few words with Woy Hodsgon as well). With UEFA sanctioning the boss with a three-match touchline ban, Dark Defensive Lord, Steve Bouldimort, was going to be the stand-in gaffer for the night but he had stated before the game that he had everything under control. […]