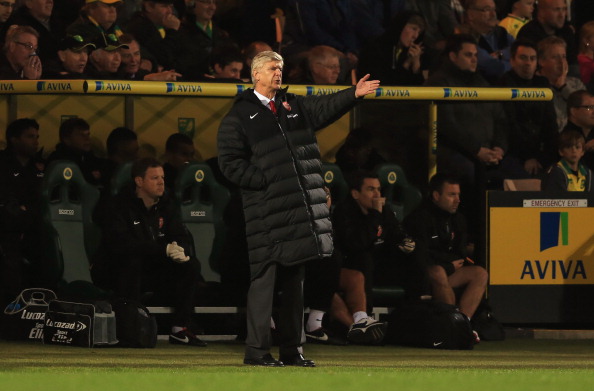 Having watched his side concede the first goal in five of the last seven games Arsene Wenger admits that Arsenal must get their act together defensively if they’re to give themselves a proper chance of winning games.

While the Gunners have only conceded six times this season, the joint lowest in the Premier League alongside leaders Chelsea, the manner in which opponents have edged in front in recent games has been a major factor in stunting his side’s effectiveness.

“It’s now five times that we’re 1-0 down against Montpellier, against City, against Chelsea, against Norwich and against West Ham,” Wenger told press ahead of the game with Schalke.

“You win one time, two times, but one time you will lose because the team who is there to defend thinks, ‘Oh, now we’re in a strong position, now we can really continue to focus on defending.’

Reflecting on Saturday’s defeat at Carrow Road and the home loss to Chelsea, the boss continued:

“That’s what Norwich did. We’re guilty of conceding the goal in the way we did. Both games we have lost in the Premier League we have given away.

“In both we had more possession, more shots on goal and more chances. We have to be more efficient defensively than in these two games.”

Identifying the problem is one thing, solving it is another. Let’s hope a solution is found quickly…either that or the rest of the team had better get in the groove of scoring a bazillion goals in every game so we don’t have to worry our little heads about things like opposition strikers.

Interesting to note that no one is blaming Bould for these problems as they had credited him earlier in the season. Not that they should.

I was just thinking the same thing when I read the article: simply haven’t heard Bould’s name in a while. He isn’t too blame; it’s just the quick “fixes” seen at the start of the season take a lot of hard work to sustain and bad habits take far longer to get out than new ones do to stick.

Good observation, that – I find lots of our fans are very quick to jump on the proverbial bandwagon when praising/belittling our players and staff. All of them should be judged at the end of the season.

it seems we are being too critical on our defense, no matter when we concede. I think our attack should also help the defense by scoring more goals.

Defence had little to do with the loss to Norwich. Yes it was poor we conceded first but too much is being made of the Norwich ‘defending’. The question should be what did they have to defend and the reason the team look so disjointed in attack.

Spot on! We had at least an hour to get something from the game and didn’t even take a sniff at our opponents goal. Yes, the Norwich goal could be classed as an “error” but I don’t think it lost us the game. The lack of drive and creativity did!

Our defensive record this season is really impressive so far. Long may it continue, and that Saturday was just a small blip in a positive start to the season.

every mistake by any defender will be served by a plate of shit! VERMALEAN I’m looking at you!!!!

What a load of bollocks…we have conceded the fewest goals in the league, it’s scoring thats the problem !!!! And as for Arsene saying we had more shots and chances than Norwich…Really !!!
I would back Arsene to the hilt, but when he comes out with this sort of shit it’s hard to take !!

And in addition we didn’t have the higher posession against Chelsea. At a stage in the first half it was 65 to 3g, and I think it eventually ended 59 to 41.

All newspapers, pundits, sport stations are trying to make us sound like we have the worst defence ever when in truth we have only shipped in 6 goals. Tied with chelsea. Lowest in the premier league. Just alittle more concertration, bouldy’s stare, wengers wise words and we’ll be back on track!

I didn’t think the defence were that bad against Norwich. Our lack of creativity worried me more…

Too right Mr Square!…….Giroud or Van Huntelaar? Would have been a great buy. Gervinho and Giroud couldn’t get in an average Prem side…..but we’re stuck with these herberts. Wright, Bergkamp, Henry, RvP….bloody hell, what have we become. And I haven’t even mentioned our top lemon….Ramsey.

We have become an ordinary side, with a very good manager, who without we would finish mid-table….oh hang on….

Thought part of being ‘a great manager’ includes choosing the right tools…correct me if am wrong please.

This is how bad it’s become, rumour has it Villa will let Darren Bent go in January…and in a moment of weakness i found myself thinking “he scores a few, maybe he’d do for us” WHAT THE FUCKS HAPPENING???????

Clearly all the praises and noise about steve bould has been pemature. we still need to wait and see.

All of you motherfuckers who are bashing vermaelen for all the wrong reasons please feel free to kiss my arse.

He’s our captain, we have shipped in fewer goals, i don’t think he has been that awful as some of you are making him out to be. Twats!

What about bashing him for the right reasons? He has not been as consistant as last season, he sometimes dives in and makes rash tackles and gives away needless freekicks in dangerous areas (the Chelsea game for instance)

And giroud for missing that glorious chance against mont, chelsea e.t.c…….
And Arteta for failing to close down that norwich man thus resulting to a goal…..
And koscienly for allowing torres to get beside him and poke in the goal…….
An mertesacker for being too tall…and..and…..blah, it’s happening all over, and i’m sure all respective cases have learned something out of it and will hopefully improve.

While we’re at it, Gunnersaurus out!

i thought gunnersaurus had a bit of an upturn in form, we shouldnt sell him, it sends out the message we are a feeder club 😉

But seriously. Go smoke something and calm the fuck down. There are a lot of new players in the team and it takes longer to sort out the attacking part. Giroud is maybe not world class but he does make it in to a French side and scores against Spain. I for one would have hated to have Rvp still pissing about, no matter how many goals he would have scored. We’ve conceded very few goals, with our third choice keeper. And the goals will come. So calm the fuck down

Our key problems for me don’t really exist at the defensive end of the pitch, but at the offensive end and here are my two cents, for what they’re worth (probably a fair bit less than two cents): 1) Like it or not, Chelsea scored first because of their quality. They forced the goal and in evenly-contested games it’s always about who blinks first. Aggravating and excruciating, sure, but not embarrassing. 2) Possesion-wise, we dominated Norwich. I don’t look at their goal as a sign of defensive fragility. It’s our own fault up the pitch for not having converted that… Read more »

This guy has lost head,we have only conceeded 5 goals,look at united or city who have conceeded more than us,what does that tell us–our defence is better than theirs,even with a below average keeper.And what a lier this old man is–he says we had more shots on goal?How many shots did we attempt ?All we had was the ball in at our feet rolling from one side to another aimlessly.For a team like arsenal,we expect them to score more than whatever teams like Norwich score,that is what United or city do,but we don’t because we have a sick manager who… Read more »

We don’t want to acknowledge the fact that there is somethin wrong with our system,how come a defeat to norwich be a shock to system when we have been loosing to these teams consistently over last 2 seasons–swansea,wigan,west brom,QPR,Fulham,Norwich have all cost us so many points,and if our great manager can’t find a way to beat these teams he should leave our team alone,we will be fine without him.These days I am scared to death when arsenal play these teams,what have we become,let’s make sure this man takes his disgraced face away from our team.

All these long rants about AW by arshavin? That’s strange.

Well, it could be worse. We could have Manchester United’s defense.

manure has a defense..?

Vermaelen just needs to cool it a bit-bar set pieces i don’t think he should even think of venturing upfield past arteta. But still, habits take time to ingrain into people,my worry is how we may begin to defer all attacking responsibility to the uber hub of creativity that is cazorla,similar to the early bergkamp years-i guess Jack’s return will help there

All this bashing reminds me of this:

Check out this video on YouTube:http://youtu.be/9gSQg1i_q2g

[…] and the fact we barely had a shot in anger against Norwich, the boss is looking for his defence to provide a more stable platform, having gone behind far too regularly for his liking: It’s now five times that we’re 1-0 down […]

Schalke Preview + Lineups, and a bit of ranting! « Blazing Cannons

[…] back to some real news then. Arsene Wenger has challenged the defence to up their game, and perform to secure results for the team. Surprisingly, after all the praise everyone, […]

Schalke Preview + Lineups, and a bit of ranting! | arsenalindiasupporters.com

[…] back to some real news then. Arsene Wenger has challenged the defence to up their game, and perform to secure results for the team. Surprisingly, after all the praise everyone, […]

The question is, is manu defense better than that of Arsenal? No. Did our defenders stop the midfielders from creating chance? Did they stop the strikers from kicking the ball into the net? If ur answer is no then stop blaming the defender for that last game the whole was poor. Hope for better performance today

Wenger throws down gauntlet to defence.

Gauntlet takes a slight deflection off Vermaelen’s boot, wrong-footing Mannone and ends up nestling in the back of the net.

that idiot AW doesn’t realize they do their best, which is not good enough