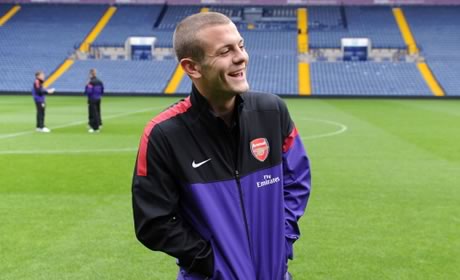 Despite Arsene Wenger saying at his early press conference that Jack Wilshere needed one more game before making his comeback, it’s been confirmed that Jack will be in the squad for tomorrow’s game against Norwich.

The England international hasn’t played a first team game since May 2011 and after a number of successful U21/behind-closed-doors games, he’s obviously been declared fit enough to take part.

Earlier, Wenger said, “He needs one more game, maybe Monday night (U21s), then he will be back.”

It’s good news for Arsenal and for Wilshere, and although it would be a stretch to see him start the game, he could well make an appearance from the bench.

Can’t believe we’ve never seen him and Arteta play together before!

Arteta->cazorla->wilshere = CLUB IN THE RIGHT DIRECTION. What did that dutch skunk say again?……..Oh wait he said nothing!, irrelevant twat he is. Come on Arsenal!!!!!!!!

@roh top gun. Actually we’ve seen Wilshere and Ramsey play together. One was against Man Utd when they bossed the midfield and Ramsey scored the only goal of the game.

Get your facts right.

I think its time we moved on from even mentioning the dutch skunk. he aint woth it

“he aint woth it”..? Is that you Roy Hodgson? Never the less, totally agree.

Samurai Jack is back

I’ll be down for the whole week with “JACARTETA”

Doctors have told me it’s a phobia of seeing jack -cazorla- arteta in action, keeping all the possesion and the opposition having none of it!.

And so the triumvirate’s name was born. Nice work

“It’s on like Fat Pat’s thong.”
Malcolm Tucker, The Thick Of It. Inspirational.

Oh its on baby, it’s fucking on. Like a fucking light switch. (lame but yeah, it is ON)

Did I say something wrong. Did I….did….
Getting emotional here…..lol j.k. Roll on the thumbs but choose carefully coz no matter what jack is back and i’m excited, maybe too much but still….

Passed from the Coq

The Jack came back the very next day!

The number of selection solutions we’re going to have in midfield is frightening.

Plus a front three of pure talent, oh I see goals, I see goaalss!

how many clubs could put out 3 options like that?

Uh ONE… Wait, that was rhetorical right?

Now watch the scramble for tickets on @arsenal_tickets…

Common blog, your headline sound simple, this shall be the one. Show us your happy arse.

Great news. I wonder if anyone has used the LANS thing.

Would have prefered him to come back for a home game but it’s awesome to have Jack back. Be good to see what he’s like

welcome back Jack the Ripper.

Jack in black on the attack, Norwich will stack because their ball skills are slack!

that rhyme is cack.

The cloud of today’s Cuntery has finally lifted.

Great news, I wouldn’t expect to see him play tomorrow, and if he does maybe a 10-15 minute slot if we are winning comfortably. I don’t see the point in putting him through too much in his first game back, another week of training will do him the world of good.

The Carling Cup game against Reading is an ideal comeback..It’s been a long time coming. Holy shit a midfield trio of Arteta, Wilshere and Cazorla is a knicker wetting thought. It’s got a great balance of creativity, discipline and box to box energy…

Aha…….jack the number 10 is back!. Prepare to wet your pants. Norwich!

Finally jack is back, can’t wait for kick off time gunners for life.

This makes my day regardless of what else happens.

“Return of the Jack!”

Could this please be sung by all attending…

Haha! That would awesome. Good shout.

Fantastic news. Glad to have him back

who the hell thumbs down that ??
troll alert .

Sound track of “Eye of the tiger” should do for jacks home game. Imagine him coming out of the tunnel in the starting xi after such a long time out, then that sound track!!! starts all round the emirates. Welcome back jack!

afterwards he could beat ivan drago for killing apollo.

I’m so hyped for tomorrow’s game now. The legend that is Wilshere is gonna tear all these teams apart. Imagine Wislhere, Cazorla and Arteta in midfield. I don’t give a fuck what anyone says that’s best midfield in the premier league.

Btw there’s a ” thumb downer “on the loose. He goes by the name……fucking asshole!

Wonderfull news, Jack is back baby

I don’t think he’s gonna play..could be arsene’s idea of reintroducing him back to a matchday atmosphere- the pressure etc. That said, its great to have Jack back!

Will… Is that you?

Interlull from afar and selection conundraaaa ‹ Arseblog … an Arsenal blog

[…] the very pleasing regenesis of Wilshere gives the manager questions to keep him tossing and turning at night. On paper, a midfield of […]

Glad to see Jack back. Can I say a quick fuck you to the troll thumbing down the positive comments? Go thumb your asshole. Cunt

There appears to be a non Arsenal fan amongst this here news blog site. How very sad that someone would spend there time thumbing down the blogs of rival fans.. You won’t fucking catch me going anywhere near a filthy Sp#rs, Ch#lsea or M#n anything site!

Up the Gunners! Thank fuck for the return of proper football.

If my memory serves me right…Jack is yet to play a competitive match with arteta,cazorla,giroud,podolski,santos,BFG,jenks,gervinho,ox…wow what a change a year has brought…can’t wait to see him.

Just in time for Halloween…The Jack-o-lanter is back to light up the league.

plz dont say anything bad about van persie..he scored a lot of goals for us and did us good service…hahahahahahahahhha whom am i fooling?? ..destroy the miserable dutch cunt hahaha

Coq says calm down, there’s only one huge member in this dressing room.

If you listen closely you can hear the nerves of all our remaining opponents starting to crack! Jack is back!!!!

I think he comes on for ~ 20 minutes after we’ve put the game away.

Ox is only England player that played well

We’re on our way!

Calm down guys,sure it’s great news to have him back but he will probably only get ten minutes if we are two or three up, been a long wait though and he must be chomping at the bit to play but there will be no shortage of twats waiting to kick him into row z.

I’ve got this feeling Wilshere will click right into top form when he starts playing in the first team.

Was worried that it might never happen. Welcome back Jack, the future of the mighty Arsenal.