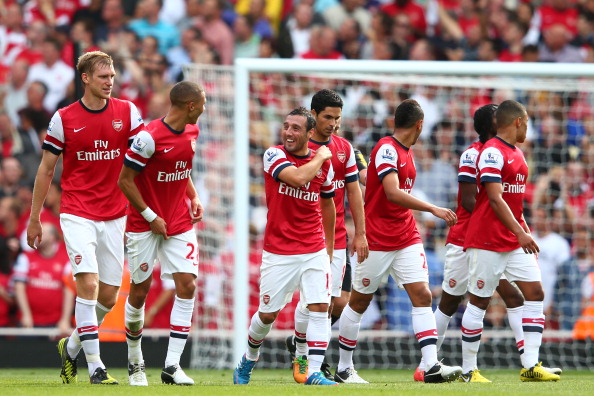 Santi Cazorla insists there is plenty of room for him to improve despite earning plaudits for the way he has adapted to life in the Premier League.

Excited about the chance to strut his stuff against Manchester United tomorrow the Spaniard also hopes he and his teammates can secure a positive result at Old Trafford that will serve as a confidence boost ahead of a busy month of fixtures.

“It is thanks to the Club, my team-mates and Arsenal’s footballing philosophy that I’ve found it easier to integrate into the side and into the Premier League in general. I’m happy. I still think I’ve got room for improvement, and so do the team, but we hope to keep on improving.

“At Old Trafford we need to control the game and keep hold of the ball,” he continued.

“[A win] would be great for the team’s confidence. To beat such a strong side at their own ground makes you stronger in all aspects.

“Let’s take the example of our match against Manchester City, which was a difficult game against a tough side. The team showed incredible quality and could even have won the game, so we came out of that match much stronger than before.

“Therefore, as well as the three points you can hopefully take from those games, you can come out stronger and take away more confidence too.”

The prospect of Cazorla getting better is certainly mouth-watering. While he started life at the Emirates like a man possessed, it’s obvious his influence in the centre of the park has been dampened in recent weeks with clubs deliberately setting up to stifle his game.

Don’t get me wrong, he’s still been excellently consistent, but fingers crossed the return of Jack Wilshere will afford him another chance to push on. A goal tomorrow, preferably deflected off Van Persie’s arse, would be most welcome.

“A goal tomorrow, preferably deflected off Van
Persie’s arse, would be most welcome.”……heh!

I would have gone for rvps chin but it’s clear he hasn’t got one……. So arse it is!

Cant wait for robins horse placenta to slip right off his body. The surgery after that should also incude a chin transplant.

Gooner til I die

Just want to say to that I don’t think we should sing the ‘She Said No’ song tomorrow or ever again. A few years ago my mate’s girlfriend confided in me that she was raped when she was 15. This has effectively ruined her life. She went off the rails, rebelled, threw away a very promising career as an athlete and rejected everything and everyone for a very long time. When someone tells you that and you see the anguish in their eyes it breaks your heart. I would also like to make it clear that I fucking despise the… Read more »

BozzaBee
Reply to  Gooner til I die

Pascal Cygan
Reply to  Gooner til I die

Completely agree, let’s let our football do the talking and show the dickheads what we’re made of.

Mental Strength
Reply to  Gooner til I die

Racist and Rape jokes should always be shunned. But I’m still sure that fans will be chanting it, unfortunately.

mike
Reply to  Gooner til I die

who would give that a thumbs down?

haha.
Can we just shout “wanker” at him like we did at Adebayor at the Emirates?
That was truly frightening! In fact, that was the highlight of that 0-0 borefest.

Gary
Reply to  Gooner til I die

I would follow you in to war, you amazing bastard!

nishanth
Reply to  Gooner til I die

I think we might not sing that song initially. But then united fans will trigger a reaction after they start that sick Wenger song.

the only sam is nelson
Reply to  Gooner til I die

Denzil
Reply to  Gooner til I die

Hear Hear…….It’s level headed comments like this that make me think there are still enough decent fans in football to keep it from dying on it’s arse.

TomJ
Reply to  Gooner til I die

New Guy
Reply to  Gooner til I die

At the moment, 360 thumbs up and 9 thumbs down. If any of you 360 are at the match and one of these 9 a-holes starts to sing the song, please punch them in the face on behalf of all of us.

Matt Jarvis' Uncle
Reply to  Gooner til I die

This has been song at almost every game this season and it really makes me cringe whenever I hear it. If you weren’t singing that song when he was playing and scoring goals for us then you shouldn’t sing it now. It just makes you look like you are smearing him as a rapist. That’s really low.

Looks like the heated Arsenal v Man Utd rivalry is back in town, buzzing for kick off already. Bringing back sweet memories of the Ruud van Nistelrooy – Martin Keown showdown at the ‘teeyater of dreyums’. Hope we give another Dutch cunt a trouncing tomorrow. Come on lads!

Agree with the comments from Gooner Til I Die completely. Only scum would sing a song like that.

God man Santi – up for it big time. And he’s right, we can do this if we play like we did at Middle Eastlands.

JamU are not that good. If we play at our best we can take them.

As for Robin, I’d say forget him. All that “you guys” shit was really fucking annoying, as is the fact that he went to an EPL team that I have always particularly loathed, with their boorish shallow ‘fans’, most of whom know fuck all about football.

Personally I do care if we win the league and would prefer to win tomorrow AND the PL, CL COCup and FACup

I want ur honest opinions:

Who do you honestly think will win the ManUre vs Arsnl match at Old Trafford?

Thumbs up for the glorious Arsnl.

Thumbs down for shitty ManUre.

Is something wrong with your keyboard or you just can’t be arsed to type Arsenal?

I say 3-1 for the gunners. Jack, HFB, and Caz on the score sheet. Horse-face’s spunk buddy RVP to score for the Mancs.

I’m a continental lad. Is Goal.com is trustworthy?

Or to be more elaborate, I’m sure their writers try to write articles you can trust, but they’re just not good enough.

no – except for the articles they poach from Arseblog

I started to read this and then remembered it was goal.com. Stopped there and then!

This isn’t at all inconsistent with what Amy Lawrence said on the first Arsecast of this season.

To be fair, although goal.com is usually complete bollocks, at the time of the Cologne game I had heard in other papers that Van Pershite now wanted to stay because of the signing of Santi Cazorla, but Wenger wanted to get rid of him.

Don’t be surprised if ManU nicks a win in the 97th minute.

Oh for fuck sake, not you!

I can’t believe Sir Alex dropped me for you, you bastard

I see sir Alex is in the press defending his players/refs that they are not stupid enough to make racist comments to Chelski players.

Shouldn’t that be the 105tth minute?.

We need Frimpong tomorrow pair with Arteta so united forwart will prefers not to attack. Mmm? What would be if Arsenal bought M’villa or Fellaini and pair with Frimpong? Opponent will no longer fear our fearsome contras but fearsome tacles. Plus we need Shawcross to scare all opponent in EPL.

M’Villa’s been dropped from the Stade de Reims squad this season a lot of times. Don’t think it’d be smart to buy a player like that, do you?
And Shawcross? Are you kidding?

I Know its a crucial game for us, show the league how much we really want the title, perhaps give Walcott the Strikers role in the last 25 mins, hes gunna be tired after playing 120 mins of midweek football, but his pace, Utd’s shitty midfielders and that oaf Carrick wont be able to stop him.

Per
Reply to  Sean

the only sam is nelson
Reply to  Sean

Why thumb down my 2-2 prediction, he asked for honest predictions yer twats! Obviously being a gooner i hope we win, but for sake get your head out of Per’s higher than the norm. Ass hole. Id take a draw now. And a win at emirates later……….twats.

Are you new to these boards as this sort of reaction is only going to make things worse if you worry about the thumbs up/down system.

People didn’t agree with your 2-2 prediction and so thumbed it down, no need to piss your pants and insult everyone

I bet per is going to be in my asshole tomorrow. While I score the goals. :/ I’m still fucking good so boo me all you fucking want. I left you because you can’t offer me titles. I wouldve played with an average squad of players that we bought for cheap.I turned down more money to go where I would win. So if you’ll are as blind as your board then only god can help you.

Looks like some guy from Reddit thinking thumbs up or thumbs down can be exchanged for real currency.

Please remember the bit about them not putting the ball in our goal!

Hardest game of the season imo, especially with Mannone as goalkeeper

oh to get a win on saturday

I will be oh so happy if we win tomorrow, feel as though we have the ability to get goals, just need to display a solid, level headed defence to back up our potent forward thinking players. Come on Arsenal, let’s send some shockwaves around Europe! A nice relaxing 2-0 win please 🙂

Lets make sure we give them a really hard time so they know they’ve been playing a proper top team – even contest and close scoreline. That’s the first priority IMO – a great Arsenal performance to close the page on last years fiasco. This is one of those games that at the start of the season you’re probably thinking we might get a draw if things go OK, being completely honest. So anything more is a bonus. But having said that Manure midfield and defence is a bit shitty at the moment and their fans are expecting them to… Read more »

There are actually some United fans who pity us… The cunts. I hope we crush them. It’s about fucking time. We have only beat them twice in the last 5 years. Not good enough.

Then Van Pursebags brought his money-box, and shaking the money and pretending not to look at Wenger, began to count it–

“Twenty-one, two, three…. Look, Wenger, a bad coin again. Oh! what rascals people are; they even give bad money as offerings. Twenty-four… and then they will say again that Van Pursebags has stolen it… twenty-five, twenty-six….

ManU XII(+Mike Dean) VS The Arsenal

I hope Van Pu$$y will score an OG tomorrow

United preview: all eyes on you know who but midfield the key ‹ Arseblog … an Arsenal blog

[…] if a team as confident as United, from an attacking point of view, will make the effort to nullify Cazorla the way others have in recent games. If he’s given more freedom to play, I think he’ll […]

United preview: all eyes on you know who but midfield the key | Unofficial Network

[…] if a team as confident as United, from an attacking point of view, will make the effort to nullify Cazorla the way others have in recent games. If he’s given more freedom to play, I think he’ll […]

dr bap tit head……….basically u can fuck off mate. just because i was being realistic with my prediction of 2-2. So just because i wasnt being so biased, like most gooners. im pissing my pants?? suck a dick lmao