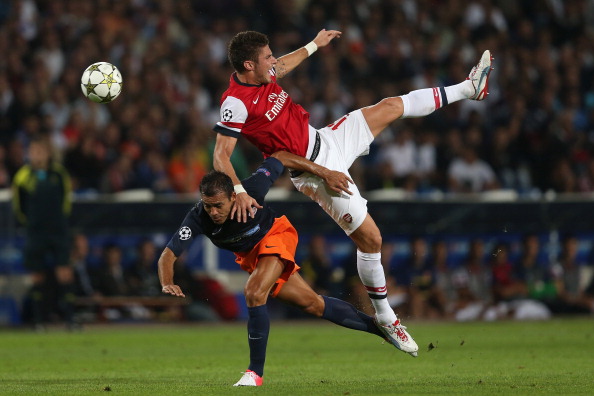 Olivier Giroud insists that Arsenal must be on guard against Montpellier despite the fact his former club’s chances of Champions League qualification have already been ended.

The Stade de la Mosson outfit currently sit 14th in the French top flight after a difficult start to the defence of their surprise title win but have put together a four game unbeaten run which sees their confidence building ahead of Wednesday night’s Champions League showdown at the Emirates.

Having already caused Arsene Wenger’s squad all manner of headaches in France, Giroud made clear that his old teammates were well placed to prove tricky customers again.

“I’ll be happy to see them again,” the handsome striker told French radio station RTL. “This year, things have not gone quite so well for them – they have had less success, but they are getting better.

“It’s a must-win match for us, but Montpellier have nothing to lose now they are already eliminated. We have to be careful as that’s when some teams are most dangerous.

“They didn’t become champions of France with no talent. We must not take anything for granted.”

While Giroud may be wary of his former side, his former boss Rene Girard also admits he’s guarded about playing his in-form former charge.

“He has been back on target. He went there to enjoy, to make things work, to score goals, and he knows how to score.

“We will try everything we can to prevent him from scoring against us.

“He is skilled, he is a hard-working guy, he wants to succeed and I have no doubts he will.”

A win for Arsenal coupled with a Schalke victory over Olympiakos will see both sides qualify tomorrow night, although it would leave the issue of first place out of the Gunners hands heading into the final fixture away in Athens.

Obviously that wouldn’t be ideal, but if Olympiakos beat or draw with Schalke tomorrow (no matter what Arsenal do vs Montpellier) it will leave all three sides able to qualify on the final day. While that scenario heightens a chances of us topping the group it doesn’t massively appeal given we’ve lost our only two away fixtures with the Greek giants and they’d have something to play for. A conundrum of sorts, but one out of our hands.

God damnit I just like looking at him so much

To be honest, I wouldn’t be all that bothered if we didn’t qualify for the knockout stages. Less distractions in the second half of the season when there are domestic cups to fight for. We don’t have the squad depth to adequately compete in four competitions at once and I’d much rather we focused on the domestic cups…

Of course, if we finish third we’ll end up in the Europa League, meaning even more fixtures (which will be against easier teams so we are more likely to go far in the competition)…so we have to win tomorrow night.

Nothing can come close to getting the chance to beat Cheaterlona again so fuck off!

I dont want to be too optimistic but Giroud will score a brace!…wow! so much for not being too optimistic!……anyway I expect an arsenal flurry, we’re full of confidence, per is now scoring, Giroud is hitting the target, jack is very much back. Girard has to worry about alot of things tommorow me thinks.

win today and win at the Greeks’.. we are the arsenal..

The game is tomorrow lol

Only Man Ure win games before they’ve actually been played.

nothing but 3 points will do.. Thanx.. Enough said

Giroud set his goalscoring target as 12 for his first season. I think its time to reassess given that he has scored 7 goals already and banging goals on a regular basis recently.
I think he will score at least 20.

Yeah, looks like he’s establishing himself as the main centre-forward too.

Hopefully he meant 12 in the league though.

A N Other
Reply to  Goona13

Hopefully he meant 12 before the ed of this calendar year.

Hopefully he meant 12 against Spurs this season…1 down, 11 in the game at Shite Hart Lane to go.

Did anyone see the way he hugged Koscielny during the game? That gave me goosebumps. Two guys who were late bloomers and althought took different paths, were hard working to rise through to top flight football and to be reunited at the greatest club ever.

Lets win something with this squad, we deserve it.

How is he a late bloomer? It took him less than a third of his first season in the Premier League to get a good run of goals going. To me, that’s a pretty quick adaptation for a striker coming from Ligue 1.

What Paulo means is they only came into the limelight at a later age than normal ie mid to late 20s.

He came through league 2 during his 20’s and didn’t start in ligue 1 until quite late I’ve read.

I understand you being shitty about people expecting a lot from players after their transfers. I get it too.

why the thumbs down?

I wish we had wingers that don’t want to play as strikers and can cross the ball to take advantage of Giroud’s aerial threat!

[…] he is coming into a good nick, at about the right time of the season. The French striker spoke about how dangerous Montpellier can be, despite having nothing to play for, while his former coach Rene Girard told his side to be wary of […]