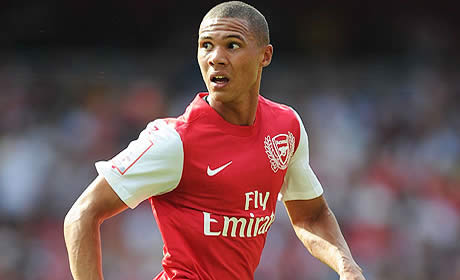 Despite being refered to, rather confusingly, as ‘long term’ by Arsene Wenger just a short time ago, Kieran Gibbs is back in full training and in contention for a place in the team ahead of tomorrow night’s Champions League tie against Montpellier.

The left back’s last appearance was in the 3-1 away win at West Ham and the thigh injury has kept him out for eight games (should be make a return tomorrow night). There was also good news Gervinho comes back into the squad having been out since picking up an ankle injury against QPR.

However, Theo Walcott will miss the game with a shoulder problem having fallen awkwardly on it in the closing stages of Saturday’s 5-2 win over Sp*rs. Andre Santos also misses out, like Walcott he took a knock towards the end of the game when Sp*rs lost 5-2 and Adebayor got sent off.

Arsene Wenger is after three points though, knowing his team don’t enjoy Greece too often, saying, “We want to win because we have a good opportunity to finish the job and qualify.”

Gibbs coming back is massive… Hopefully it will bring poldi back on form again!

It also sparks up the debate for CB too. I think he’ll stick with TV5/Mertesacker even though Koscielny hasn’t given any reason to be dropped in this second spell in the first team(with TV5 at Left back)

Truth be told, Mertesacker has probably been our worst defender in the last few games, not by much but with the nippy forwards Montepellier have it wouldn’t surprise me to see Vermscielny in action tomorrow if Gibbs starts.

Did you see the game on Saterday when we beat Adebayor&co 5-2, poldi scoring and assisting cazorla? Podolski is back!

He was still better when Gibbs was fit… Therefore poldi with Gibbs will be even more juicy!

Poldi seems to have developed a rather useful knack for managing the odd goal or assist even when not quite bang in form. That’s something our squad has lacked in the past, and it’s a good trait to have. And just makes me salivate even more at the prospect of a properly in-form Poldi!

Seeing Walcott on this great run also highlights what Gervinho lacks in his game. I just don’t see the Poldi-Giroud-Gervinho attacking trio being too much successful. The Ox would be better maybe?

Wouldn’t surprise me if he got the start after is blistering cameo against Spurs, seems like he’s ready to go.

how did santos injured himself?

I hear super-fast driving takes its toll on the body

Give it a reay already. I havent really noticed before in brazilian serie a…but i saw two matches last weekend, and in both matches all the players swapped shirts at halftime.

a rest, i mean. Damn mobile

Good thing the bpl is in england and whats that about “when in rome?”. I like santos though, dont let this small chat make you think otherwise. I’ll not defend the “rvp – cunt” part though

Maybe in the tunnel after the game he asked to swap jersey’s with Adebayor?

Hear hear, Gibbs is huge to the way we play.

I loved how Walcott always looked like a great option to break lines on Saturday. He really is so dangerous. With a little improvement at dribbling, he could be even more so.

My pay rises are typically in the area of a couple of dollars an hour. Fuck’s sake sign the contract boy!

I would like to see Chamakh get a chance if this turns into a null and void affair. He played (relatively) well against Reading, and if he isn’t going to be given a chance, AW should simply free up the wages and let him go in Janaury for a box of Jaffa cakes.

Aalekh
Reply to  Up the Arse

He should have takers though, and offloading him without purchasing another striker seems impossible

Midfield Corporal
Reply to  Up the Arse

If only It were that easy. Even if we gave him away for nothing, I can’t see many Foreign team of his standard being able to pay his current salary. My understanding is that because he came on a Bosman transfer, we in effect pay the transfer fee to him over the term of his contract, Consequently his monthly salary is artificially high.

This is very good news. We need a proper left back to play there, and Gibbs is the only one at the club.

Shame about Walcott. Bring on the Ox!

Its a good news but the medics need to learn how to keep Gibbsy from treatment table just as they did to d “little boy crying inside” Gibbs absence has really caused us valuable points.

wait, just to clarify these injuries happened in the game we beat sp*rs 5-2 AND adebayor got sent off, right?

I heard Adebayor got sent off, and We beat spurs 5-2

I don’t see Gibbs starting, in fact I’d be disappointed if he did because it would probably be Kos making way, I’d like to start:-
Szcz
Sagna-Mert-Kos-Verm
Arteta-Jack
Ox-Caz-Pod
Giroud

Lennon was in TV5’s pocket on saturday. I hope it is a return to form.

I think we will start with this:
Szcz
Sagna-Verm-Mert-Clichy
Song-Jack
Nasri-Cesc-Pod
Persie
What a team we got!

I dunno, Cazorla and Arteta should probably start, being better than the options there.

so you would sit yourself?? and certainly Cazorla over Nasri any day… but since we are living in your world… we’ll go with your lineup

the ox must be the natural replacement for wally walcott

wouldnt be surprised to see wenger gamble a bit and give arteta or jack a break and start ramsey or the coq instead. Just a feeling…

I didn’t realise Santos was really injured on Saturday when we beat Spurs 5-2 and Adebayor got sent off. I thought he was just running down the clock as we were beating Spurs 5-2 with Adebayor having been sent off. Good timing for Gibbs to come back to training.

We beat spurs to close the gap? even though we beat them im sure they will be playing in Europa Cup, isnt that the cup everyone wants to get into?

Not everyone. Just Man City.

Gibbs will come back and get injured again. Diaby and Gibbs have had similar stories. What a waste of talent and at the moment, it seems it is a waste of wage too

Gibbs has injury free after the big full back crisis. sube when did you last watch a game?

Heh. Injury free? It says in plain English he’s missed the last 8 games. What a twat.

I would hesitate to start both Gibbs and Gervinho who’ve been out with injury. I suspect Wenger will go with Gervinho as RW and Vermaelen as LB. (Now that I’ve said that, he’ll surely start Gibbs and Ox).

I’m a fan of Gibbo but if it means Kos back to bench and Verm as CB, then no, thanks.

I’m very happy to have Gibbs coming back. I do hope he is 100% and we’re not risking him. We really need him at LB long term this season for the good of the campaign. I would have to go with Kos and TV5 at CB against Montpellier as their speed will give BFG more than a few problems.

I just wanna know what’s gnna happen to Kos if Gibbs returns !!? He been the highlight on our back 4 ? Him n Mert.!!!

Theo’s out with his glass shoulders.

Gotta feel for the guy trying to survive on his £65k per week sick pay.

Gibbs coming back will also allow for some rotation at the moment.

I fear the the 11 who started on Saturday will become so relied upon, I hope there isn’t going to be some burnout in the future. Everyone needs the occasional rest!

I like the debate about the defence. Last year we would have given anything to have such a debate. Two starters are mert and sagna and the rest should be picked based on opposition- Gibbs, verm and kos are good enough to be chopped and changed. Pacey wingers = Gibbs. Height from set pieces verm and kos. Here’s one. Rest jack, verm and arteta in def mid. Verm can be our new keown/petit/gilberto.

Verm is captain so first name on the team sheet. Its harsh on who drops out if Gibbs comes in. Verm will be back to his best soon enough. Bring on a good winning run.

To whoever makes the call. I hear we are close to turning the financial corner. Just give Walcott the 100k, he’s in form, sign him up and send a message that we are closed for business as a feeder club. JFDI. And let’s get on with winning.

The partnership btw mert and kos is perfect.I think gibbs shld still have a little rest for montpellier game

The sooner Gibbs is back the better!

Without both functioning full backs, running at speed and overlapping the shape of the team and the style of football we try and play never quite comes off.

Take tonight. There are balls going astray. Looks round from are midfield players. The balance isn’t there.