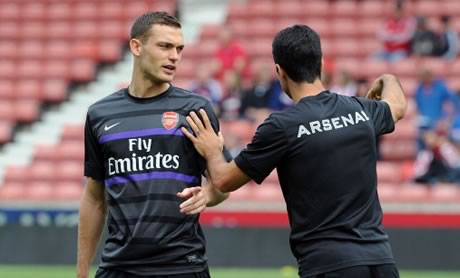 Mikel Arteta spoke to the Mirror today about how the players were trying to put things right on the training pitch and by working harder.

Arseblog News understands that both Arteta and Thomas Vermaelen have been consulting ProZone stats and have, as well as looking at their own performances, been making suggestions to teammates about how they can improve aspects of their games to help get Arsenal out of the current funk.

And while the skipper is aware that things are not going as well as they should, is calling for unity amongst players and fans.

“I agree that this is a difficult time, but the only thing to do is to stick together”, he said.

“There seems to be a lot of negativity among people outside the club at the moment, and I don’t want to go along with that because it’s not the way to achieve anything. Some people seem to like being negative, and it appears to make them happier somehow, but that’s not the attitude you’ll get from me or my team-mates.

“Let’s be positive, while being aware of the things we’ve done wrong and making sure that we keep fighting.”

Meanwhile, Kieran Gibbs says the team can’t neglect their defensive duties even if they’re trying hard to win a game, as against Swansea last weekend.

“We were obviously trying to get the win, and we suffered in the last couple of minutes of the game,” he told the official site.

“We’ll have to be aware of that from now on, because this can’t happen – that we’re pressing for the win and we forget about the other side.

Arteta on the performance, scoring late and Lacazette’s injury

Arteta: No excuses, Pepe has everything he needs to succeed

Ladies and gentlemen, I think the penny may finally have dropped.

We’re gonna smash West Brom tomorrow. And when we do i’ll be the one going skins swinging my scarf around my head.

I love it! personal responsibility: From K Gibbs work hard of the ball, we know he does. Some fans are negative well they are beautiful bastards who care the AFC. And some are becoming negative because of repeated mistakes, i happen to be one of those. What are those mistakes? from my untrained eye, Team selection for whatever reason. Players playing out of positions, Ball watching (not even getting close to the ball) Too much passing between the Center Backs and Keeper. How many times has Giroud knock the ball down and no other forward is near to bounce to… Read more »

Marzena and I are beginning to think about a caaratmran as our next boat. Realizing that pointing ability is somewhat sacrificed, it seems that the speed, space, comfort, and age friendliness of these designs appeal to us. The real trick is finding a boat whose aesthetics are also appealing. Please reply with any positive or negative thoughts.

COME ON YOU ARSENAL!!! Prove the doubters wrong and finish strong……..and maybe some silverware would be nice but more importantly shut the doubters up.

I’ve got a couple of stats for them… We’re in 10th place with 21 points and have only won 5 games. Time to sort it out and stop hiding behind the manager’s patience. Wenger defends them from pretty much all criticism, so it’s time for them to step up, act like the men they are supposed to be and stop whinging about tiredness. I’m woken up every night by one of my kids and so haven’t slept a full night in pretty much 8 months. I still get up everyday, go to work every weekday, and don’t earn £50k+ in… Read more »

I really don’t know how Mikel Arteta is ‘hiding behind the manager’s patience’ and ‘tiredness’ when he says ““People say it’s fatigue. It’s not fatigue”

“We all know we can do better and when you feel that you get very frustrated.”

“People are hurting, people are upset with themselves, the players are angry. I think that’s a good thing. It’s not like players couldn’t care less, they know what they need to do.”

No need jumping to conclusions.

We have heard for seasons now that the players “know they should do better” but they are happy to hug and high five the opposition and put in worthless performances while the fans are told that we need to stick together through it all.

Other than spending my months wages on a ticket for the Emirates (a slight exaggeration, I know), going to the games, shouting, cheering, booing the opposition and generally chanting, etc… I don’t know what else us fans can do to stick with the team. Get on the field for them perhaps?

“but they are happy to hug and high five the opposition and put in worthless performances” I don’t know where you get this much insight, you must be their psychiatrist. Hello there. “while the fans are told that we need to stick together through it all.” Arteta: “We need to start well, give the crowd a hand and something to cheer. That will give them a lift and that’s so important,” What, you think the players should go around and say “Fuck you Arsenal fans, don’t stick through all this, go nuts and support TOTTENHAM!” Even if you’re deeply frustrated… Read more »

Here’s a better chain of events. Get ball, bust a gut running, pass it twice, shoot it hard and into the corner of the net, defend, defend, defend. Repeat.

There you go. Get on the ball, pressure makes opponents fissile and forces mistakes. Do that for 90+ minutes and you are going to have a favorable outcome.

Well, we have to win against west brom tmr. If not, we are all prettt much fucked. All the best though. COYG!

There’s one stat that matters – winning the fucking game.

Even though just a win would be fine, I think a thrashing would be sweet. Nothing against WBA, don’t care that much about them but Arsenal’s reputation of how to play needs to be demonstrated consistently.. with several games coming up in December and January the big ones, I think we need to sharpen up our game. December to get the fluency back, January to send a statement out.

Heh, so Arsene is taking stat lessons in training now 🙂

”Some people seem to like being negative, and it appears to make them happier somehow…”

These are some very true words!

Does Vermaelen really need stats to tell him he’s been playing shit? I’ll tell him to his fuckin face if he wants.

He played well against Swansea and Olympiakos. I think his form is beginning to show now. Our problem is our attack.

Would you really tell him that to his face? that would not be wise, have you not seen his eyes?

Cazorla Want For Christmas Is You
Reply to  Arseblood

Apparently the Verminator took the 8 O’Clock train home once, and then refused to give it back…

Let’s be honest – when was the last time Vermaelen was consistently solid defensively for a period of say, half a season or more? NAturally he’s really struggled with injury, but even in his first season I feel like his goalscoring heroics covered a lot of frailties in the job he was actually meant to be doing. He hasn’t earned his reputation as a top class defender in my eyes.

Not that I don’t hope he will.

Just crossing my fingers that all this ‘positive talk’ translate to a poitive display from the boys come tommorow… COYG!!! We are right behind you… Well at least i am…

It’s all very well Arsene protecting his players and not criticising them in public, as long as he kicks shit out of them in the dressing room, can’t see it somehow.

I would much rather hear that the manager and his assistant have been giving the players this info rather than them having to look it up on ProZone.
Seven million a year for what exactly? To loan the captain his laptop?

It’s a bloody good laptop though

What does Arsene’s pay have to do with anything? I don’t see anything odd in players looking up stats and getting insights into their and their opponents performance without Wenger’s supervision. Call it homework. Either way, it shows they’re working on it and that the game is analysed from all angles by those actually kicking the ball.

A consistent win from tomorrow would be good..but a draw 2moro will be a sh*t:[email protected]

You should be a football pundit.

If you’re bored go to http://www.gizoogle.net/ and type in arseblog.com. A bit of a laugh

Not trying to curse us or something but let’s not get our hopes up just yet… Whatever happens 2mo happens if we win that’s great news if not then I really don’t what to say..

I feel sorry for WBA. They’re about to feel the force of the mighty Arsenal artillery tomorrow.

I have every faith we will crush them and continue on a superb run until the very end of the season.

Arsenal need more pressing all over the pitch?
Arsenal need to tackle more to win the ball back?
They haven’t been looking at ProZone stats, they’ve been reading my By The Numbers column.

Oh, putting yourself forward for a job are we 😉

West Brom preview: 3 points a must - Arseblog ... an Arsenal blog

[…] more consistent results. From Arteta and Vermaelen there’s talk of working harder and doing more to turn things around, and as captain and vice-captain they have a bit more responsibility, but […]

In Rosicky we trust !
…and it is time for Ox to shine…

[…] more consistent results. From Arteta and Vermaelen there’s talk of working harder and doing more to turn things around, and as captain and vice-captain they have a bit more responsibility, but […]

All players must up their games n decide to win. Against Birmingham in d final, was Wenger suppose to get into d pitch to win d game 4 dem? Chelsea won d Champions league cos d players decided to not bcos Dimatteo was special. Once d players decides to win by playing for d fans, club, Wenger n themselves, they can achieve all if they desire it.

If we don’t win this game… I will seriously question these players mental qualities. They may lack confidence but this is one of those games where confidence shouldn’t be needed. They needed to run like its the biggest game of their careers and forget about every other game. And if we do that West Brom should get annihilated. Our motiviation to win this game should exceed their motiviation not to lose much much more.