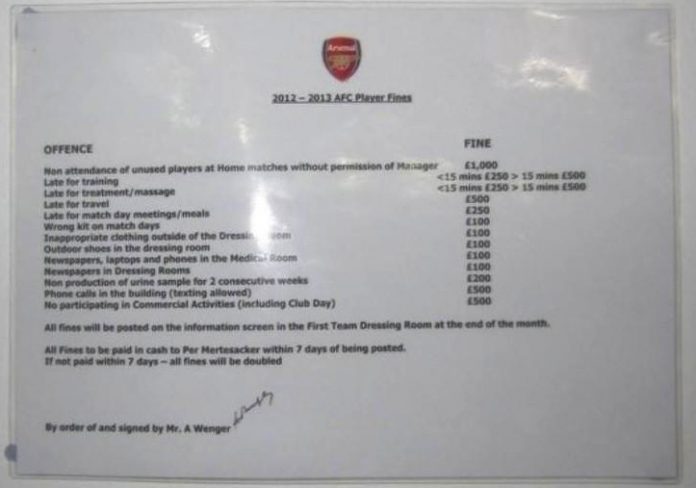 There’s a photograph doing the rounds (see above), taken at Arsenal’s London Colney training HQ originally posted by @bootifulgame on Twitter, showing an A4 sign that outlines how Arsene Wenger clamps down on ill-discipline in the Gunners camp.

From turning up late to wearing the wrong kit, there’s a fine for pretty much everything. It isn’t though the only list which exists, as Arseblog News can exclusively reveal…

All fines will be posted on the information screen in the First Team Dressing Room at the end of the month. All fines to be paid in cash to the Big Effing German within 7 days of being posted.

If not paid within 7 days – all fines will be doubled.

By order of and signed by Le Prof.

I’ll let the thumbs down be our response.

Should have put this one in @Allen.

But Seb, I’m not in the mood for your shitty mood.

Fuck off and come back again when you’ve grown a sense of humour.

Gunner From Another Mother
Reply to  Seb

On the contrary. I needed to read something funny like this after yesterdays…game.

“All fines to be paid in cash to Per Mertesacker” – Am I the only one who finds this fucking hilarious?

And credit to you for “Not wearing Dr. Dre headphones when stepping off team bus” hilarious as well

goontang
Reply to  Gunner From Another Mother

I think there should be no headphones allowed at all, and tomas rosicky controls the team bus music. Maybe the boys would be fired up in the first half if they are listening to abit of Ramstein instead of Tracey Chapman.

R18
Reply to  Gunner From Another Mother

But how will rosicky control the bus music when he never even in the friggin bus. Either he’s out injured or at the studios recording music (does he do this?, he seems the type)

Okay, I miss him. The footballer not the rockstar.

goontang
Reply to  Gunner From Another Mother

I believe one of the fines is “not showing up for games even if your not on the teamsheet”.

You give people like me a bad name. This is exactly the sort of levity we needed!

Trivia! This is Pulitzer Prize stuff.

what did this guy do wrong to get 5 thumbs down? you can laugh even?

I think it was the extra ‘ha’

what about an extra ha? returns it to an even number

‘Failing to turn up to a match until the 46th fuckin minute, yet again – a hearty kick in the fuckin bollocks you useless bunch of cunts’.

do you know, i always seem to be tired the day after a game.

maybe its all those trips backwards and forwards to the recycling bin, need a Guiness anaesthetic to watch 1st halves at the moment!

Seriously? Go post on She Wore a Yellow Ribbon if you want to moan about how shit we are. That’s all you seem to get over there.

This was supposed to be in response to Seb, I enjoyed this post!

I got banned from posting on that site. Not totally sure why but I think I was too optimistic about our abilities !

haha that sounds about right. I stupidly had a glance at the comments on a post about the loss yesterday, honest to god there was supporters saying the might as well go start supporting Spurs!

I mean things are not great at the moment, but that is the kind of level of supporters they have there.

Not strengthening the squad in january – failure to qualify in for the champions league, loss of revenue, futher decline…

Its a shame the top fines arent…

*assuming there is such a thing?!

Silent stan would love that idea.

“Asking for a happy ending in the massage room”

kieran hunt is a good looking guy indeed. though i’d rather get that kind of massage from chelsea’s eva carneiro 😉

She’s a fuckin babe I always sit up and pay attention when there’s a cut away to their bench. Haha

I don’t like seeing her next to terry on the bench though.

“Step away from that lady you cunt” I wish it were that easy, maybe terry needs to start matches more often then. Problem solved.

Now that’s definitely a paddling! Who knows, you may enjoy it!

HAHA all cash to Mertesacker… Too slow to make away with the money….

Ha. “Merkel-sacker”. So that’s how Germany are able to bail out us Irish.

Nope. That would be because its a loan and is being paid back with interest

I think you missed the joke in there. I’m aware that Per Mertesacker isn’t directly channeling Arsenal’s player fines into the Irish government’s coffers

The English are a bit uptight though, Gearoid. Look how upset they got when they started losing their invasion fiefdoms…sorry, i meant “colonies”

Fines in the hundreds or even a couple of thousand are a bit pointless when a player earns £100k a week.

Especially if they just want to know what shenanigans Snoopy and the gang got up to.

blatantly Per just put that up there himself to make some extra dollah.

It’s because he is German.

Per being the collector made my friggin’ week

I can’t imagine anyone telling him “Fuck off, I’m not paying” twice.

I liked this interpretation: http://i.imgur.com/ALY3Qaf.jpg?1

I’m fairly certain that Mertesacker is the world’s friendliest debt collector. Probably intimidates players into coughing up by smiling sweetly at them.

A hearty one to cheer us up. Thanks Allen, laughing all the way!

Pretty sad seeing what’s happened to the identity of the club. For a team famous for free flowing inventive football anyway.

What do you mean?

funniest post in a good while.. not easy to have a good laugh these days

Wonder what happens if BFG is late with his fines??

He’s German. German’s are efficient. Being late is not an option

He would never incur a fine. He is Mertesacker.

Our first team are on what an absolute minimum of 40k a week? These fines look completely insignificant.

How much should one be fined for illegal reading of a newspaper?

Brilliant – thanks for the laugh

forget the fines, They should add incentives for players like Diaby who kick John Terry in the face and knock him out

A couple of Bayern Munich players were fined earlier this month for wearing the wrong coloured socks to training. In comparison our fines are reasonable.

Metal and Rock are the shit.

“the Meerkat voice / Arshavin / he likes it” comment really made me laugh! C’mon let’s beat West Ham this week and get some poper momentum going before Bayern Munich next month (which might be our last chance to watch CL football at Emirates for a decade).

this entire joke of a season might be worth the pain if i can see Poldi spit on that dutch cunts face at Wembley in the FA Cup final.

Hahaha this is hilarious!!

I saw that photo week ago, LOL

saying “It’s like a new signing” or “the spirit of the squad was good” – Manager fine, haha. I love this blog!!!

@ALLEN. This is some of your best work. Might I add.

Taking out a nobhead who has fouled throughout the game, and turned into Tom Daley when your keeper breathed in his “personal space” – +£20,000 bonus, and all yellows paid by the club for the season 😉

This is just fucking brilliant 🙂

failing to score a sitter….
you would attend harry redknapp’s english class

And make a side payment to his dogs bank account

Haha this is some next level stuff..good one blogs

Am I the only one that finds this flippen great. Great work guys

I could almost see Vermaelen pulling out a bunch of £20’s, switching to cold dead eyes mode and whispering.

these fines should be in percentages… top earners wouldnt need to care about these peanuts fines. itll definately hit the the poorest players at the club

Kind of makes sense in a way. If you are on less money the fines will hit you harder, making you more likely not to breach the conditions so that by the time you are on good money it shouldn’t really be an issue anymore.

no players on good wages will have any issues. why would they though? they are free to breach any rules as long as they pay up peanuts. it may keep the youngsters on their toes but it certainly doesnt keep the seniors.

The point im making is that when you are younger, it’ll have more of an effect on you, so in theory they should learn from their mistakes and by the time they have grown up at the club it will have been ‘disciplined’ out of them – But in all honesty, even if you are on 20,000 a week instead of 100,000 a week these fines are still relatively minimal.

That can’t be right or else we would have paid off the stadium by now and eyeing Messi’s buyout clause.

TomJ
Reply to  A Yank

True, Theo would owe us cash by the time his contracts up

I read that as ‘ejaculation’ then. Steady on chaps, just paying a fine will do….

I’d love to ejaculate into the top four if it gets us there (how my dreams have shrunk to fit my reality….)

Just give us the good half of Everton. Should be easy, right?

Well done for trying to cheer us all up. I’ve felt sick all day. It’s like finally realising the cancer is terminal and all the chances that they’ve had to catch and cure it have been overlooked. Rip AFC.

The board/Wenger is destroying this club at the moment, by not spending money. Without investment, our chances to finishing 4th is the same as zero. It doesn’t exactly take an rocketscientist to see that this squad needs strenghtning.

I love Per Mertesacker. Him as the fine collector made me laugh so much. 6 foot 6 inch tall BFG.

So…….. have we been reduced to fining the players every day to help with the transfer kitty? it looks like no one disobeys the rules then, cos there aint no fucking transfers happening thats for sure.

•Tackling Diaby in training – £60,000 pound per week for the duration of the injury

Even made me smile.

Now back to being miserable about how shit the club has got lately under Wenger and the board.

“Driving at 175mph to training – 2 weeks
wages + publicly swap shirts with RVP”
Something tells me santos would do this
everytime. Publicly swapping shirts with rvp at
expense of 2week wages?. You’ve got santos
signed up for that.

Chamberlain kicking in the snow (trainning)
and then he’s all over sudden mysteriously ill?
This has to stop….£500 fine + forced to read
piers morgans tweets.