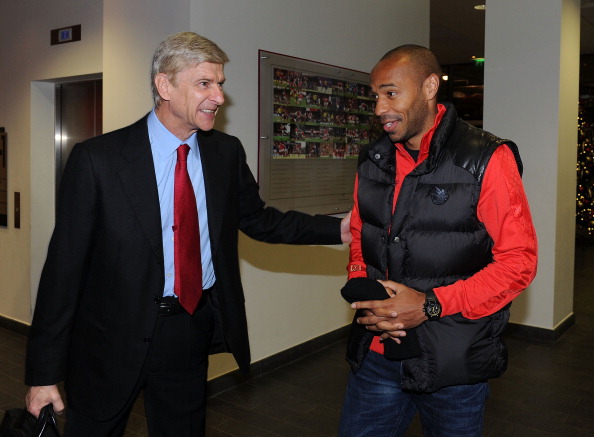 Although he has recently stated his desire to win MLS with New York Red Bulls, former Gunner Thierry Henry has been speaking about the club closest to his heart.

In an interview carried on France Football, Henry backed under pressure boss Arsene Wenger, and hinted he’d like to return to the club in a coaching/managerial role when his playing career is finished.

Speaking about his former boss and mentor, he said, “When you don’t win, people constantly question your work and your legitimacy. Everything you have achieved previously is forgotten.

“For me, these are things that are hard to hear, difficult to live. It’s sad, but it’s football. I know what Arsène Wenger has done for this club, in my eyes he will always be a great man.”

And with a new MLS season just weeks away, the club’s leading goalscorer of all time spoke about his desire to remain in the game once he’s retired as a player; his preferece being a return to Arsenal.

“All I know is I’d like to stay involved with football, and, I hope, at Arsenal. It’s the heart that speaks, it’s the team I support.

“If I can come back to the club, I’d love to do it, but it’s not my decision. It would be a wish, a desire more than something that can be made official, I have two more years to play here, then I’ll see.

“But I’d really love to be back with Arsenal.”

Thanks to @OllieRoo for the translation

Hurry up, we’re waiting for you…. *pats the bed in a seductive way*

That is some complient from one of the best strikers to ever play football. I would love to see Arsenal spend more money on ex players to have a role in the club, and less on subsidising senior players loan deals

Wait wait wait. Whose this guy who keeps thumbing down all the pro Henry comments. What’s that about!

Oh Titi, you’re such a tease!

Was thinking he’d be great as our head of youth. A guy all young players will really look up too, and a great bonus in negotiating young talent 😉

dont think thats enough for such an important job, much more required than just a great playing career (not saying that henry couldnt do it, just that you need experience to coach young players and an eye for talent, something that henry hasnt shown yet)

His fluffed chance in front of goal last night was the highlight of the match.

Keep it up Robin

What a brilliant man he is!

What an absolute legend. I’m sorry but this guy is just too much of a legend. Smh. Get back here!

And i read somewhere that the club wants to bring paddy v back as well. Henry, bergkamp and paddy v together again? I can only dream….

He made his blue moon bed, now he gets to lie in it.

I wouldn’t say no to Paddy. Him and Kolo are the only two I like enough to forgive the trip to Manchester

Imagine a managerial double team of berkamp and thierry, with wilshire as the captain. *looks into the distance smiling*

Can this man be any more awesome?

If he woke up 23 with an 8 year contract in hand, that would be major awesome.

Usmanov using the Trojan horse tactic now then I see…

you said it walnuts

Not too many great players make great managers….I hope Henry is an exception.

Build him another statue! Perhaps cupping Pat Rice this time.

I enjoy my weekends going to The Stadium supporting The Team, who’s been managed quite well by the Manager Man. Player 10 and Player 19 are my favourites.

But really, I don’t care.

Just win the premiership and the Champions league.

I’m sure that Roman Abramovitch feels exactly the same about Chelski.

He should be given a similar role to that of Zidane at Madrid. He can court potential signings and sell the idea of Arsenal to them.

Increasingly we need an edge in the transfer market. I think that he could be it.

The Chip on AVB's Shoulder

Henry u are wellcome back 2 arsenal

Henry should not be manager, but he should be at the club in some aspect.

The role most suiting IMHO would be head of youth, or coach for the forwards. Head of youth being his best role.

As head of youth, he would be a huge draw card for younger talent to come to the club and they would all look up to him in such a huge way.

As a coach for the forward, i think he’d be good technique wise, but i feel most of Henry’s ability, just can’t be taught. He was one of a kind.

Your goal celebration in front of Spuds idiots will never be forgotten and you are my favourite gunner. I would back you for presidency of USA, so yeah come on be our boss.

Strikers’ Coach for starters can’t be too wrong…

Having him back in a coaching capacity would be much more effective than a managerial one at whatever level. Just imagine having Theo, Giroud and Poldi being coached by Henry. Cockle warming to say the least

Henry: I’d love to be back with Arsenal | Arsenal Highlights

translated back to english from the chinese site, the headline reads

“Henry: The most romantic thing to grow old together with Arsenal”

Some Champions League and Thierry talk ‹ Arseblog … an Arsenal blog

[…] the meantime, Thierry Henry has admitted he’d like to come back to the club in some capacity when his playing days are over and has […]

having him around the club,as well as bergkamp in future? oh,thats a fucking ambassadors reception of a daydream, break out the fucking ferrero roches!

[…] the meantime, Thierry Henry has admitted he’d like to come back to the club in some capacity when his playing days are over and has […]

Goddamit …..all these feels like an interlull. The fuck?. *Craves some arsenal footie

Wow, just wow. To see the legend in the dugout next to Bergkamp with “Arsenal” on their chest gives me the shivers.

Bergkamp sitting calmly and analyzing the game, while Henry is up screaming at the lads. Holy diver, that would be f****ng amazing!

As an Arsenal fan who now lives in New York I still get excited every time I go to Red Bulls games. You can tell he’s older by the way he plays, but he’s still got that special something that reminds me of his time in London. I got very nostalgic the first time I saw him play in New York