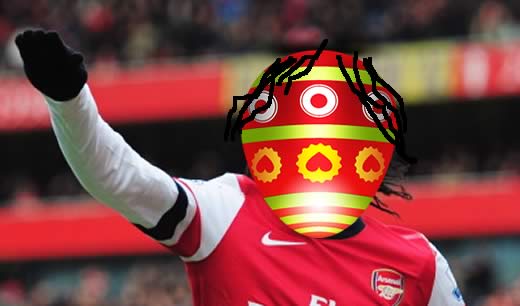 After a comfortable 4-1 win over a hapless Reading side,it’s time to look at how the players rated and what kind of Easter egg they’d be if they were turned into chocolate. You know how it is.

Lukas Fabianski: 7/10 – Had very little to do, will be unhappy his defence spoiled another clean sheet though. Snickers.

Bacary Sagna: 7/10 – Back in the side ahead of Jenkinson, who can consider himself a bit unlucky, but experience counts for a lot at this stage of the season which probably explains it. Solid if unspectacular. Kit-Kat.

Laurent Koscielny: 7/10 – Like the Mert, not overworked but made one brilliant tackle in the box when the linesman missed an obvious offside. Making it tough for Vermaelen to win his place back. L’ion bar.

Nacho Monreal: 6/10 – Switched off for the Reading goal, then whacked his knee off the post. Made lots of runs which were ignored in the attacking third. Toffee crisp.

Mikel Arteta: 7/10 – Metronomic passing, anchored the midfield perfectly, got himself a goal from the penalty spot. Aero.

Tomas Rosicky: 7/10 – Probably should have scored late on to cap a brilliant Arsenal move and a wonderful Cazorla pass, but a good, if unspectacular, display. Finger of fudge.

Santi Cazorla: 8/10 – A joy to watch … again. How can anyone resist those too-big shorts and wonderful skills? Reeses Pieces peanut butter cup.

Gervinho: 9/10 – Had some ‘Gervinho’ moments but a goal and two assists deserves the credit it should get. Ferrero Rocher, with this performance you are spoiling us Mr Ambassador.

Olivier Giroud: 7/10 – Some nice flicks around the box, should have been awarded a penalty when flattened by Taylor, but took his Gervinho assisted goal well. It was his first in over 7 Premier League games so: After Eight.

Lukas Podolski: 6/10 – Not entirely sure he touched the ball when he came on but hopefully he’ll play a bigger part in the games to come. Dairy milk.

Kieran Gibbs: 6/10 – Came on for Monreal who blonked his knee off the post when they scored. Did grand. Kinder bueno.

All that sweet talk is making me hungry.

Yes, but limited mention of Cadbury eggs is a tad disappointing.

oh well. there is always next year am i right!

arteta was spectacular I thought. he was the rock upon which some of the finest football of the season was built.

Agree’d. However, an I was watching him in the ground, I have to agree with Arse2Mouse. The man looks gassed. He badly needs cover for next season.

These ratings gave me diabetes

Fair enough, we were playing Reading but we needed a win and the lads delivered. Excellent

After eight. Take a bow sir..

Gervinho vs anyone else: Skunk poo wrapped in rubber

‘laughs at his own jokes’.

I’d have described them as diabetic chocolate – hopeless.

Arsene Wenger, giddy like a kid during the interview afterwards – Haribo.

Midfield has a shape and solidity to it thats been absent all season really …..Might Arsene be tempted to use Jack as an impact sub next month?

I am Vito Mannone

Gervinho played well yesterday. He was constantly on the move and always getting in to good positions, like a well lubricated probe into the arse of an unsuspecting reading defence. I hope he keeps his place for the W.B.A game.

Mills N7
Reply to  I am Vito Mannone

Snorted my tea out of my nose at that ‘well lubricated pole…’ line. Well done sir.

Calling that after 3/4 of a season? Yes let’s all be short sighted.

I reckon he’s gonna be the next overmars or ljunberg. Class player and will only get better with more minutes on the pitch.

I don’t know, but I like how everytime he’s about to come on he acts as if Wener doesn’t exist. Completely blanks his attempts at instructions.

Enter a g for g-spot.

The absence of “thumb feedback” seems to indicate that not many have observed this behaviour. Strange.

Gervinho was class, he needs a new celebration tho, the Nazi salute is all wrong!

indoGooner
Reply to  Me innit

Gervinho already explained in Arsenal magazine, that’s not a Nazi salute, that’s a salute mimicking one of a WWF players, I forget whose the WWF player, all i can remember is Arsenal player 🙂

Yeees, however someone should probably explain the significance of the gesture in Europe, especially given who are local rivals are; I don’t think he means offence but some could easily take it.

My first thought upon seeing it was that it did look rather like he ought to be goose stepping and shouting zig heil, but then I remembered that black Africans are not traditionally card carrying members of European fascist parties and assumed that it was probably meant as something else. I think anyone with even a basic knowledge of European history will realise that he’s not doing a bad John Cleese impression.

Heh
Reply to  Me innit

He better not! I have a feeling he might stick mid-air and fall on his head like a hammer….

Or simply fail to get off the ground.

He needs to work on his shooting for sure. His stance foot (the left) is usually way too close to the ball when he shoots. Dont leave enough room for the right foot to strike properly.

Its like hes a right footed player with two left feet. But practise will straighten it out in no time.

I’m pretty sure Kinder Bueno’s at least an 8… but damn did the squad look good!

Off to eat chocolate.. But only had Sagna at home.

Chris Foy, a squashed, past its “best before date” mouldy mini egg, the fucking twat!!!!

Top marks bloggs. The squad is starting to look strong at the right time. No jenks no angry TV5 or angry Woj, Theo and Jack to come back. 8 games hopefully 8 wins.

2 assists and 1 goal…torres and Silva would kill for some of those bad ass stats!

don’t know if gervinho is spoiling us or just should be like that all the time, think wenger had him in mind to play like this every week, week in week out lets hope, let’s hope… he looked positivley henry like at times picking ball up on half way and running at defence…:]

Well I don’t know about being the next Henry (who is though) but I definitely agree he had a cracker yesterday. If you ask me, this is the sort of impact Wenger was expecting of Nasri who when in form is also a great dribbler. Gerv, although lacking some of the technical skills of the former adds both pace and work rate – a good trade off in my opinion.

Good game and more is expected in the next eight games. Garvinho was a delight, Carzola a beauty and the midfielders were sensational. In Arsene we trust.

We got 99 problems but the pitch 'aint one

Was at the game yesterday sitting quite close to the corner flag and it is quite amazing how large his shorts actually are! Nice tribute to Rocky and feelgood atmosphere in the ground. One little quibble though please get off Gervinho’s back,the lad had a blinder,yes he can be frustrating at times,but when he’s in full flow he get’s bums off seats, and he’s no more frustrating than our absolute refusal to have a dip from outside the area,yet one misplaced pass and people are screaming at him! Give him some wiggle room and maybe just maybe we’ll start to… Read more »

Good rating’s but I’d just like to say that I was appalled at our fans yesterday! Now I live on the other side of London and have no where near the income to watch Arsenal play on a regular basis. So to see fans starting to leave, 10-15 minutes prior to the game finishing was embarrassing, especially when you consider how magnificently we were playing in the closing stages of the match. The passing, the ferocity of our attacks, the absolute definition of the philosophy of what this club is all about in terms of footballing on the pitch. It… Read more »