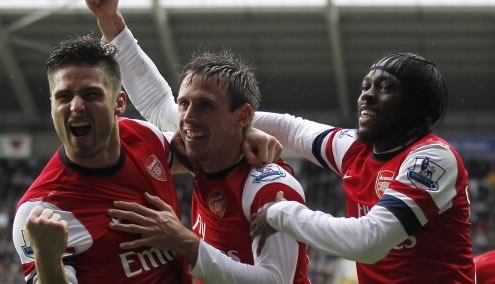 Nacho Monreal says that the team will be fully focused on finishing in the top four and is confident that Arsenal can meet their target between now and the end of the season.

The left-back, who will start tonight for Spain against France, told the official Arsenal Magazine that every game is of critical importance, and the team must concentrate on what they want to achieve and not what people say.

Having been on the receiving end of plenty of criticism, the Gunners have bounced back with two good wins against Bayern and Swansea, and the former Malaga man wants to accentuate the positives.

“We still have matches left to fix the situation and try to meet our objectives. It’s logical that people talk because the situation has not been as it should be, but the players and club in general have to ensure that doesn’t affect us.

“We have to use our energy for the matches. If you’re thinking of what people are saying, you’re wasting that energy. You have to concentrate on the next match. Every fixture now is a final we have to win.

“That has to be our mentality, I’m sure we’ll put it right. We have to use matches like the win away to Bayern as positive examples for the rest of the season.”

Ahead of tonight’s game, Monreal also spoke to Marca about life at the Gunners.

“I’m honestly very happy,” he said. “I’m with a great team in a spectacular city. From the first moment I arrived at Arsenal they treated me so well. Furthermore, I have Mikel and Santi, this helps me a lot because the English is quite challenging.”

English indeed is challenging. or the English, in which case there would follow the plural form of verb be, as far as i’m concerned.

this interlull cannot end too soon. last weekend i would’ve happily watched ‘Sunderland vs. Norwich’ had it been on Sky Sports.

The french match was not bad, like watching them play when that ManU prat isnt in the team. The asshole that plays in the left back ..whatsisname.
Almost fell asleep seeing the Spaniards tikking the fook outta the ball.

“I have Mikel and Santi, this helps me a lot because the English is quite challenging.”

I agree with Nacho, the English are quite challenging to put up with. What with all their moaning and whining and that ‘Little Englander’ mentality. 😛

What did monreal say to the sp*rs fan regarding top four? Wait….wait

Awful? Blame it on the interlull……..and partly gervinho

The Sp*rs fans need to face the harsh Monreality of the situation.

We have the easiest run-in from any other club competing for top 4 but will need favours from the likes of Stoke/Sunderland to get at least a point from BaleFC.

God, when did we think we’d be relying on the gremlins?

The point is that we HAVE TO rely on a helping hand from other clubs at the tail end of this season – a testiment to how pisspoor we have been for a very large part of it.

Reading some of the fans comments, it would apprear that its now a case of “All’s forgiven Arsene – roll on next season” and that a 4th place finish actually is a trophy.

“What have we become?” should be the question.

when you’re knocked out of every other competition there’s no point in complaining about it because we cant go back to the beginning of the season, what we can do however is maintain fourth place for the sixteenth consecutive season (really dont understand how we’ve managed it that many times considering the money we’ve spent in comparison to other clubs over this period) and attract more top class players to add to what is an already established core of a team, hopefully not lose our captain for the third season in a row and keep our best players

The Lube
Reply to  HitsMan

Easiest run-in??? We still have WBA (A),Norwich and Everton (H),Fulham(A),Manure(H),QPR(A),Wigan(H) then Newcastle (A). These are all games, bar one or two, that we dropped points at, with a stronger squad…Our opponents might have an ‘easier’ run-in, but I just don’t see us not dropping points in most of our away games

HitsMan
Reply to  The Lube

Have you seen Spurs & Chelsea’s games?

Tell me you’d swap any of their run-ins with ours.

Its essentially a 50/50 between us an spuds taking into account the matches each of us “should” be winning. However, we all know that spuds are crap at the end of the season plus we have a bit of form. I would say we are now odds-on to get 4th.

I’m sad enough to have been keeping a spreadsheet since the beginning of the season, where I first defined the minimum a title-challenging team should expect against each team – winning home & away against bottom, home win/away draw against midtable and wins against fellow top teams considered a bonus – and then tracked how each result related to the expectations of this hypothetical title-challenging team. At this point Spurs rate at 84% compared to 82% for Arsenal and both have hovered around the 80% mark all season. Assuming performances continued at the same level to the end of the… Read more »

the only sam is nelson
Reply to  paulos

has this system won you eleventy billion pounds at messrs william and hill?

i do hope so

it sounds brilliant. can arseblog host this spreadsheet? is it a pivot or formula based? do you take into account team movements during the season? i’m actually a little jealous just thinking about that.

If you’re bored, watch me playing for Accrington Stanley and realise what you’ve been missing all these years. Oh, wait…

Has anyone noticed that Fabianski has bulked up? His arms look HUGE now! I think this prolonged period on the sidelines has really helped him like Wenger has said. There were a couple of stutters in the Bayern game, most notably some of his kicking, but I genuinely do believe that he can challenge chesney now! He seems in a much better mental state.

Oh Nacho, what a welcome addition you’ve been.

Nacho hasn’t been at Arsenal long, yet he’s already spouting platitudes. I can see why Arsene bought him.

Natch will be a huge star at the Grove

Unrelated but, Ramsey had an amazing performance against Scotland. Absolutely class.

Definitely overcoming whatever was ailing him earlier in the season and last season.

Yeah I watched the game and was so pumped he had such a great game, completely bossed it. Defended, attacked, made tackles, interceptions, scored a penalty after delivering the ball that caused the tackle from Scotland. He was seriously was popping up everywhere. Drove the team forward and willed the win, a true captain’s performance. Was dumb of Coleman to take the armband off him.

Yeah am surprised Blogs hasn’t had anything up on Ramsey’s stellar performance. I’ve seen some other good Arsenal blogs making posts about it. Was happy we had so many international Gunners put in performances, watched all their games and for me Ramsey’s individual showing was the best. Special mention to Ox as well, with Walcott out he should get a decent run of games to show his stuff.

Just watched the England game. I confidently predict that Gerrard will lift the World Cup next summer.

While he had strong moments, I thought overall Gerrard was pretty weak. If he lifts it, I hope Gerrard isn’t the captain. I want someone with a hunger for the win rather than the acceptance of a draw to lead the team.

You reckon he’s going to quit playing and get the job of moving the World Cup onto the table for the presentation?

Basing on your analysis, i can also confidently predict that Man U will be relegated this season. England is so short on quality to lift any major trophy. I mean minus Jack, Ox and Gibbs who else is there?.

Ok im welsh so maybe a bit biased but England aint good enough. Its not so much they aint good players but their not technically strong players with good ability on the ball. Look at Spain for example their league is technical, so they have good players on the ball with good understanding of the game with players who play the same style of football for club and country e.g. barcelona/ Spain. The premier league is a physical league and English players lack technical ability and all the clubs play a different system to their country . So teams with… Read more »

This website uses cookies to improve your experience while you navigate through the website. Out of these, the cookies that are categorized as necessary are stored on your browser as they are essential for the working of basic functionalities of the website. We also use third-party cookies that help us analyze and understand how you use this website. These cookies will be stored in your browser only with your consent. You also have the option to opt-out of these cookies. But opting out of some of these cookies may affect your browsing experience.
Necessary Always Enabled
Necessary cookies are absolutely essential for the website to function properly. These cookies ensure basic functionalities and security features of the website, anonymously.
Functional
Functional cookies help to perform certain functionalities like sharing the content of the website on social media platforms, collect feedbacks, and other third-party features.
Performance
Performance cookies are used to understand and analyze the key performance indexes of the website which helps in delivering a better user experience for the visitors.
Analytics
Analytical cookies are used to understand how visitors interact with the website. These cookies help provide information on metrics the number of visitors, bounce rate, traffic source, etc.
Advertisement
Advertisement cookies are used to provide visitors with relevant ads and marketing campaigns. These cookies track visitors across websites and collect information to provide customized ads.
Others
Other uncategorized cookies are those that are being analyzed and have not been classified into a category as yet.
SAVE & ACCEPT
wpDiscuz
34
0
Would love your thoughts, please comment.x
()
x
| Reply