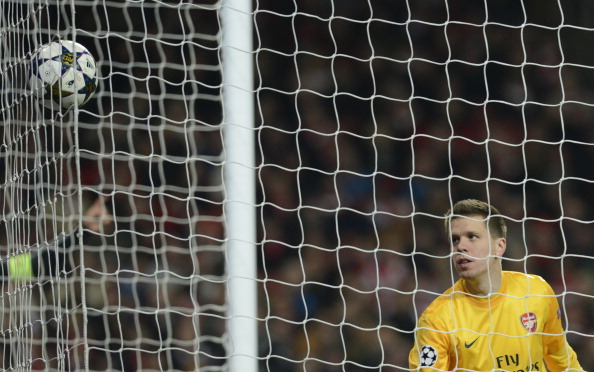 Wojciech Szczesny says that Lukasz Fabianski deserves his run in the side at the moment after admitting that his own form has dropped in recent months.

Despite sitting out Arsenal’s wins in Munich and Swansea, the 22-year-old has showed no sign that he’s stewing over his current predicament.

Having run onto the pitch in Wales last Saturday to congratulate compatriot Fabianski at full-time, Szczesny also released a statement yesterday apologising for the critical comments made about Arsene Wenger by his firebrand father.

Keenly aware that he needs to improve to win back his place as number both at domestic and international level, Szczesny gave a frank dissection of the current situation while preparing for his country’s next World Cup qualifier.

“My form is down right now which is normal given my age,” he is quoted as saying by WP.pl.

“I knew I wouldn’t play against Bayern and was prepared to watch the game on TV instead. Of course I would have loved to have played but Lukasz is now in better shape than me.

“If my team wins twice in a row without me I can’t complain. The most important thing is that Arsenal are doing well. In the next Premier League game Lukasz will play.

“The same goes with the national team [Southampton keeper] Artur Boruc is much better than me at the moment.”

Given Szczesny’s profile in Poland is so high and that a microphone appears to waved in his face from the moment he gets off the plane in Warsaw he’s handling his media responsibilities very well.

If there has been a criticism away from his on-field travails it’s that he comes across as a little too cock-sure. Given his humble behaviour in the last week, it looks as though he’s maturing.

not that handsome french bloke

form is temporary, class is permanent..

alex
Reply to  not that handsome french bloke

I think this was important – for him to come out and, indirectly, support fabianski. Lukasz is a huge confidence player – looks great in training, but didn’t quite hit that level in matches. I don’t think Sz’s dad’s comments would have sat well with him either, but it’s good to see Sz supporting Lukasz. We’re all a team, no point sabotaging your replacement.

Lec
Reply to  not that handsome french bloke

What’s that about taking two step backwards to take one huuuge! leap forward.

I think it’s less humble than it is Szczesny being honest and realistic with himself. At least it’s good he knows he’s not doing up-to-par and taking it on the chin; it doesn’t mean he’s not cocky, it means he can clearly differentiate dreamworld and fact, which is great considering the case of TGSTEL. I don’t think he’s changed or matured (as far as what he’s shown in interviews and social media), this kind of public image was what he showed even on his Twitter days and I’m sure he’ll get back into form. To be honest the only reason… Read more »

Gunner From Another Mother
Reply to  Anon

I would say that being able to be honest and realistic with yourself is a large part of being humble.

I’d say his sending off at the Euros didn’t help him so he wasn’t exactly starting the season full of confidence.

That keeper that replaced him played better than he did.
Dont see the big deal in dropping him, finally AW is doing that.

what a thing to admit flapianski better than me? wow still no decent keeper at the Arse..spend the money wenger

What you on about? Chesney is quality on his day.. Flappy is doing just fine
Your comment would have made sense at the end of last season, but note though.

the only sam is nelson
Reply to  ddan

Tee
Reply to  the only sam is nelson

You don’t mention at home there’s only 6 teams who’ve conceded more goals.
But it is a good point, maybe not so much defense and Goalkeepers to blame, but then only 3 teams have scored more in total (Man U, Chelsea and Liverpool (seriously). So by that we should really be 4th.. Were we’re gonna end.
So to sum up, if we want to win, we need to score more and concede less.. Who Knew ay ?

the only sam is nelson
Reply to  Tee

I am afraid, I get the “making the right noises” vibe from this.

Still at least being politically correct keeps the wrong headlines away. That is a good thing.

How would you guys rank our 3 keepers in terms of who’s best? I was previously under the impression that Mannone was better than Fabianski (he played pretty well earlier this year), but now I just have no idea who I would start out of the three of them.

IMO, Mannone doesn’t rate for the EPL. If he weren’t at Arsenal, he wouldn’t be in the EPL period. I think he’s got terrible decision making on set pieces, and he just doesn’t appear to be a first rate keeper overall. Just my humble opinion.

That’s fair. I have mixed feelings about him, but gained some respect for him earlier this year.

When they’re all on top form

Martinez i think have about the same potential as Szcz.

According to The Sun, our tea lady was made to serve hot beverages while recovering from a cold she had in November. Her Mum yesterday told Talkshite radio that she was sick of Arsene risking her daughters career, and TL was off to Barca on a 3 year deal, taking the Digestives with her.

Another day at The Sun, another storm in a teacup…………….

(Some details may have been fabricated in this story, wonder if Mr Howard would give me a job?? )

The best keeper is the 1 who makes the least mistakes and has the best shots-goals ratio. I was very dissappointed wtih Szesney after Blackburn tbh.

Brilliant attitude. This admission is a sign of maturity but also of someone who knows within himself he has the quality to get his place back. That, for me, is the sign of true and honest competitor and a quality team player. Wilshere, Gibbs and Szcz all came through together and I guess it is no coincidence that all three have fantastic mentalities. The fact that he could have easily thrown his toys out and caused a huge fuss (as is the norm these days) I for one definitely value his attitude and it can only be a good influence… Read more »

Thiangs goes changing, the other day Fabiansk on starting lineup was irritating enough, today, when him on the start, gives me confidence, its clear from this observation, we know where we coming from but we don’know we going. But now we know where are, let’s try to contain the situation, within our reach coz you never know may be tommorow Vito Mannone will be our golden choice. But now that Czszesney is keen with the situation, I think we on the track, those are the good news.

I love a player who loves the club. And for that, I hope one day szczesny can be our no 1 goalie, even, our Captain.

He sounds down at the moment. I think this period of reflection would help him in becoming a good keeper in future.

…or he’ll follow in the footsteps of Camus and go from goalkeeper to philosopher.

He could call himself Szocrates.*

*in honour of the Athenian philospher, not the Brazilian midfielder – though he was my boyhood idol, along with Kenny Sansom.

that’s why i love arseblog.

wish you were as forgiving about gervinho…

Put yourself down to go up!

Theo injured his groin at national team camp. I don’t want to imagine what they are doing to poor Ox right now.

Anyone notice that our team work solidly for defensive duties at the begining of the season when Mannone was at goal. And now for last two games as well when Fabianski were at goal. So is there too much trust for Szczesny or too much trust for Jack the lad.

THIS IS PURE PROFESSIONALISM, MATURITY, BRILLIANCE AND MANNERS THAT MANY PLAYERS LACK. GIVE A TICK WHERE ITS DUE AND THAT IS SZCZESNY JUNIOR. JUNIOR AND SENIOR, WHAT A DIFFERENCE! YOU MAY THINK THE STATEMENTS WERE SWARPED. HA HA!

I JUST LOVE YOUR LOVE FOR ARSENAL JUNIOR. KEEP UP!

I LOVE SZCZESNY EVEN MORE THAN WRITING IN CAPS LOCK!!! HA HA!

Seriously though, I do love Szczesny even more after this.

i hate the whole “given my age” excuse. seems an easy way out to me. there are plenty of keepers his age excelling

Fuckin brilliant Scz, thats y its important to have players that are fans at the club (excluding the Dutch pussy-like imbecile). Ofcos he knows its not okay to be sitting on the bench but again its not a good idea sending negative vibes through the team. Big up Scz, take ma sister for marriage for free, no dowry.

I might have to get Szocrates on my next Arse shirt