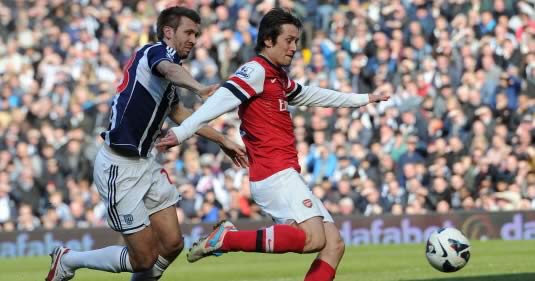 Tomas Rosicky says his two goals against West Brom yesterday were enjoyable, but that he’s just as pleased that he could help out the team to take three crucial points.

The Czech got his second and third goals of the season in the 20th and 50th minutes, and along with his goal line clearance, that was enough to ensure a Gunners victory.

Speaking to Sky Sports, Rosicky said, “I’m not a big goalscorer so it’s great when you score in a goals and you help your team to win, it’s a big day for us.

The win moved Arsenal into 4th place, and if results go their way today, they could stay there. And the midfielder is confident that experience of battling for the top four will see them over the line.

“It will be very interesting until the very end,” he said. “We know we have to be consistent to be there, we have the experience from the last years, so when were produce the stuff we have in the last few weeks I’m confident we’ll be there.”

Its been said alot in the last 24 hours. But again, i fucking love this guy.

Rosicky is a class act, he genuinly has the qualities to be THE TOP midfielder in the world that too without the sissy antics associated with other top midfielders (mostly in bARSElona)…
Just hope after RVP he gets to be next one to be injury free…he is long due…

Next season will be interesting. We will sell no important/useful players, and this will allow the squad to jell. With a few quality additions we will be challenging for top honours on multiple fronts.

Does anyone else think there should be a medal ceremony for the top 3 finishers. 1st= Gold + Trophy, 2nd=Silver and 3rd=Bronze. It seems redundant that a team can finish in the top three and have nothing to really show for it.

ONE season. I want ONE season where Rosicky plays 40+ games. I’m sure we’ll be competing for top honors.

Next season it’ll be a Rosicky-Cazorla show from start to end if he stays fit.

You do get the feeling he is a fan favourite throughout the Premier League. Impossible to dislike him, unless of course you’re a Sp*rs fan.

Yeah i’d say so too.My brother,a liverpool fan,always saying that wasn’t a penalty or that was a red send him off etc when MOTD is showing Arsenal highlights reckons Rosicky is an good player from us,turns up when we need him to.Hearing any sort of Arsenal praise from him is almost unheard of.

I am slightly worried about fixture congestion coming up:

Hopefully we have the depth/quality to win out in these must-win matches.

With BFG getting a much needed rest in the next game and Verm getting some game time, plus our 2 players in each full-back position, the defence looks sorted for the fixture congestion. I’d like to see Cazorla rested for a game and with Jack coming back (fully by Fulham A), the mid looks sorted too. That leaves the attack. Giroud could be rested for a game with Poldi up top (shame he hasn’t been used). Walcott would be ready for second or third of those games and Ox is yet to be unleashed. So perhaps we have the depth… Read more »

I’m not too worried about Norwich thanks to their abysmal away record, the potential issues could be rotation, like playing Podolski up front, which we haven’t done for a long time, as well as Wilshere needing to return to his previous form.

Havent started with Poldi up front since like the first game of the season.
Unbelievable he didnt get more chances there.
I think he’d score more goals in that position than Olivier.

I agree. Rest Caz and have Wilshere and Rosicky play together.

Arsenal is qualifying for Europe’s elite club competition come may. I just know it and of course, the facts and records speak for themselves. Arsenal has become synonymus with a top-four finish just as United is with the title. Spurs and Chelsea can’t be a threat because at arsenal, every player know it’s non-negotiable. Just hear what Tommy says!

One nil to the filth. I had a sneaky feeling they’d do this. One minute, one shot, one goal.

Concentrate on norwich and cold n flu tablets arsene and less worrying about those potatos. They will ruin their own season without our help.

Unless youve cooked up another batch of special lasagna for them.

Actually a draw was the perfect result. That means we can now overtake Sp*rs with a couple of wins and Everton is also not too close to us.

Spuds have Defoe and Bale out and their defense is rubbish im very sorry but Everton should be playing better and winning this game.

I’d call him ‘two-mas ro-sleeky’ but that would just be absolutely awful. *slams door*

Spuds 1 Toffees 2,get the fuck in.

tomas rosicky needs to play behind the strikers…the central attacking midfielder…its where hes at his best…see.vs west brom…..

Did anyone watch match of the day last night? Specifically the part where the “expert” lawrenson highlighted a rosicky slide tackle and said it was “definitley the first of his career”.

I know! He does about one every 10mins and its not like he is a complete unknown, before he singed for us he was one of the best midfielders in Europe especially in Germany and I was surprised we went for and got him at the time, as I thought he would end up at Barca or somewhere similar. You’d think these people who ‘love’ the game would know a fair bit about players but these guys just seem to be picking comments out of the hat and a just reading them. I think they are more like the news… Read more »

Rosicky is one of our “dirtier” players in terms of tactical fouling, much like Arteta except that he doesn’t have to do as much of it as Arteta. And this type of fouling is a positive attribute too, something to be proud of (unlike Stoke’s I’ll-break-your-leg-you-foreign-cunt fouls). Mark Lawrenson doesn’t know what he’s talking about.

That was an unacceptable comment from Lawro, Rosicky is known for his slide tackles, hasn’t Lawro watch the YouTube combination of Rosicky-Slide Tackle. 🙂

everton 2-1
sunderland 1-0
what a beautiful weekend

Happy days a draw takes Everton out of it im very happy i would of taken a draw before the game.

Tottenham are crashing and burning without Bale.

Not too long ago we would have sturggled when our better players were out or we were too reliant on an individual. Just like Spurs are now. It speaks volumes that we can can have Wilshere, Gibbs & Walcott and still able to perform!! Normally we would be playing with the handbrake on but im happy we have chosen a vehicle which has no need for one. Also that we can too afford to drop Szcz, Vermaelen and rest Podolski at a crucial time in the season and still be able to play well and get results. This is great.… Read more »

I did not appreciate that we started that game without Walcott, Wilshere, Gibbs, Podolski, Vermaelen, and Sczcesny, those 6 players were guaranteed starters not long ago. Bodes well for squad depth, though I still think we are short a striker, a defensive mid, and maybe a goalkeeper.

Isn’t that the ideal result for us? We’ll be ahead of Spuds if we win the next match, and we keep Everton enough behind us if we were to make a mistake when we play against them.

And 0-1 Chelsea – Sunderland! This seems a very fine weekend indeed if this result were to stay the same. (Hope I didn’t jinx it now, though..)

I was hoping for a draw in this match, I don’t want us to go into the game against Everton with the possibility that they could overtake us with a win.

They need to lose this match. I hope Sunderland win 8 nil due to Chelsea receiving 5 red cards (complete with 3 game bans) and Di Canio and Rafa have a fight.

No go, can confirm from sources they kissed each other on the cheeks.

Well, we can take heart from Sp*rs’ traditional end of season antics:

Tomas is looking sharp now he’s fit, and the football gods are smiling on us too.

Hope they keep it up, and the chavs get Di Canioed!

My favorite player alongside Jack. We all know what he brings to the team but his lack of goals generally surprises me, because he’s scored some real belters in the past, can use the outside of his foot and makes volleys look easy

He probably epitomises Arsenal’s fortunes ever since he arrived; Massive potential, clearly a quality talent, amazing spirit and enthusiasm of the game and has gone through as unlucky a time as Diaby has with injuries and has never been truly able to deliver…. Until NOW!!!!

You need to have to Confidence to do things like that in front of the goal. Even for good Players/Strikers like Torres it’s not really easy to regain that confidence after you were injured for a long time. Today, Rosicky was given to confidence by his first goal to snatch the second. Let’s hope it weren’t been the last for Arsenal In that condition, he and Santi are magnificent together!

Would feel like a trophy if Stoke went down you know.

if man utd win the derby tomorrow night and we win our next two games – we will be in second place on goal difference – fact!

True, but I wouldn’t get too happy since they’ll have two games in hand over us, and whatever you might think of them, they have a lot of dominant technical quality and mental strength, so they are likely to win both games.

In an ideal world, they would lose to everyone except Spurs in their remaining fixtures.

But this will cheer you up:

Good ol’ ‘Arry and his Qpr (Quite possibly relegated) bunch. A joy to see.

Good ol’ ‘Arry and his Qpr (Quite possibly
relegated) bunch. A joy to see.

An award of the Ryan Shawcross memorial tackling skills trophy to Zamora, if you please.

That had “Stoke” written all over it. High, studded and followed by the incessant mooing of fans at the poor bastard who had the temerity to stick his head into the bit of air that Zamora was intent on kicking the shit out of.

Haha well put. In the modern game nowadays the fans on the stands are more concerned of the card coming out rather than the potentially I.C.U’ed fella lying on the ground.

arsenal back again to where it belong: 5th place

With a game in hand.

At least moan with some substance.

[…] hero, Tomas Rosicky, has been speaking about his performance on Saturday against West Brom, and the fact that he got not one, but two goals in a […]

I hope he signs one more year soon…