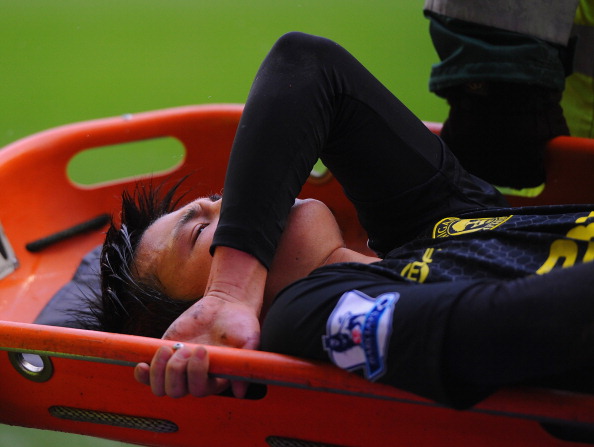 Arsene Wenger has praised Ryo Miyaichi’s determination to get back to full fitness after confiming the Japanese international has undergone successful surgery on his ankle.

The 20-year-old winger has been forced to return to the Emirates prematurely following an injury riddled loan spell at Wigan Athletic which climaxed with ligament damage sustained against Everton in an FA Cup quarter-final clash which marked a comeback after months on the sidelines.

Despite a year of setbacks, Wenger made clear that his young charge still cuts a very diligent character in and around the training ground while hinting he should be fit to play in this summer’s pre-season tour of his homeland.

“He’s back in the last three weeks now for rehab,” Wenger told Japanese media at his pre-Fulham press conference.

“He’s doing extremely well, his surgery went well and he’s working. He’s focused everyday [and in] early. He’s the first in and the last out, like many Japanese players.

“He’s doing extremely well but he still needs some patience. It’s 3-4 weeks before he plays again. He’ll be back before the end of the season.”

Speaking recently about his desire to take part in the July fixtures against Nagoya Grampus and Urawa Reds, the player underlined that despite the pressure to perform it would be a fantastic opportunity.

“I hope I can play in Japan as an Arsenal player,” Ryo told Arsenal.com. “It would be a great moment for me.

“Arsenal have a huge [number of] fans in Japan – like in China and Malaysia as well. It will be a good time for the whole team. I spoke with my family and my friends and they are happy to see Arsenal in Japan. They want to see me on the pitch of course!

“To be honest, there would be pressure and I have to play well and show my quality to the Japanese people. I’m a little bit nervous but I’m looking forward to visiting Japan if I am selected.”

Arseblog News isn’t really sure what Arsene Wenger has planned for Ryo (who has a weirdly deep voice, check it on Arsenal Player) next season given the way this year has panned out. He could still probably do with another decent loan spell but with time at Feyenoord, Bolton and Wigan under his belt he’s in danger of being one of those perma-loaned players that never gets a real chance at the Emirates before being quietly shipped out.

It would be nice to think he isn’t another Junichi Inamoto bought for cynical marketing reasons, however, when you see him wheeled out to chat about the tour of the Far East you can’t help but think that might have had something to do with it.

All the girls love him. He’s a market magnet.

^It’s not cynical to purchase a player who has 1st string potential, but also the potential to be an icon in a foreign market, I think. Park Ji Sung pretty much singlehandedly turned South Korea into a Man U country… Korean Arsenal fans are pretty rare to come by despite Park Juyoung, who was still a lead national player (sadly) coming to Arsenal. It’s not cynical, then, because the player needs to be successful and a media presence in order to create that sort of return. For an Asian player, it’s a huge opportunity and the chance to represent the… Read more »

That may be, but I really hope he starts hitting his potential for the club. I’d love to see when Ox comes central that Ryonaldo and Joel Campbell become our first choice wingers. Some years into a future of course.

A future where we don’t concern ourselves with the long-term consistency of our players, like Gervinho and Theo, and the idea of money-soaked deadwood fringe players a forgotten memory… Ahhh, to dream a hopeful reality.

Certainly, wishing the best for his recovery – point of my comment was that signing him is not cynical in that, his use for marketing really only works out if he hits his potential..

maybe they all live there?

What time does McDonald’s close?

lol was thinking that too. Arsene probably makes them all go out to training together so he can say it about them all.

Yeah, I was going to post the same thing. Not just Arsenal either, you hear it so often about so many players at every club.
Maybe there’s a clock-in system and the first guy in/last guy out clocks everyone.

I really do hope he has a good pre-season and beds his way into the first team squad. I know the Premier League is a different kettle of fish compared to the Dutch Eredivisie but he seemed a very influential player at Feyenoord and a fan favourite so let’s hope he gets some game time during the tour of the Far East and show what he’s capable of

He’ll be better than Walcott. I know it. He is Walcott with better technical ability from what I’ve seen of him so far (albeit very little). We’ll see how he deals with pressure.

Weirdly i actually thought Ryo was/is a good player. Compared to Park Chu Young, he actually has ability for this league. He’s very quick and is what you’d call a “proper winger” who gets at players. Maybe its just me

No, you’re right. Park Juyoung is old and going nowhere. a selfish player with little vision… even Koreans dislike him.

“when you see him wheeled out to chat about the tour of the Far East you can’t help but think that might have had something to do with it.”

Yeah, you’re right, they should’ve wheeled out a guy who lived in South America or Europe since we’re talking about the Far East which includes Japan! Why would we want a Japanese player’s perspective on playing in Japan with your English team that sounds pretty ridiculous. Terrible decision by Arsenal’s marketing personnel. Get the ball rolling and let the sacking begin please.

Maybe it was this that stuck in my mind.

Or you could watch im play and conclude he has been bought because he has the potential to be fantastic.

Ryo is fantastic player, i just pray for him injury will not spoil is football ambition

If ryo was good enough for dutch football,he is more than capable of playing in the premier league,please forget this illusion about the premier league is the best,in my opinion you are all very biased about your football,altough i am an ARSENAL supporter,my advice to rio is JUMP SHIP son,or you will live to regret you ever came to ARSENAL ,just like many talented younsters who WENGER destroyed their career.

You should make more words randomly capitalised, I think it would help make your point.

I’d love for this guy to make it at Arsenal. From what I’ve seen, can’t help but think he’ll be a better Walcott for us.

Walcott could be a better Walcott for us, if he’d just work on doing what we know he *can* do rather more of the time than he actually bothers to do it.

It’ll be interesting to see whether we add any games in South Korea to time with the return of Park.

Ryo is sure -fire first XI

Wow this is great news 3-4 weeks isn’t too bad. I thought he’d be out for much longer

For anyone else in here (mild anorak tendencies heh) who also gets slightly irked with the mispronunciation of the guy’s name.

1 syllable, not ‘rio’ like the place in brazil but closer to ‘row’.

I really do hope this kid makes it through OK and features for Arsenal he is young hard working and loves Arsenal which is just what we need from our players.

“Ryo (who has a weirdly deep voice, check it on Arsenal Player)”

That just caused the anime otaku in me to wonder if you were watching the dubbed version rather than the subtitled one.

A really surreal moment that I just thought I’d share.