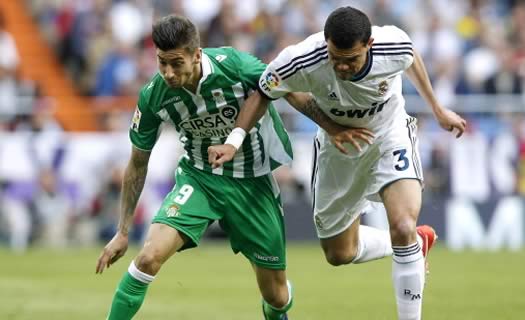 As Arseblog News reported previously, Arsenal are close to agreeing a formal tie-up with Real Betis.

With Joel Campbell currently on loan there, and the La Liga club keen to keep him for another season, discussions have taken place between the two clubs about a more authoritative partnership.

This would see the Andalusian club get a pick of promising Arsenal youngsters to take on loan, with names like Serge Gnabry and Tomas Eisfeld mentioned as possible candidates.

As well as that, Arsenal would like a bit of ying to the yang, and reports in Spain suggest that as part of the deal, the Gunners want a first option clause for exciting youngster Álvaro Vadillo.

The left winger has recently come back from a cruciate ligament injury but has made 11 appearances this season. Last year, he became the second youngest player to ever make a debut in La Liga aged 16 years, 11 months.

Vadillo has a contract until 2016, with a €20m buy-out clause, and while a deal is in no way imminent, Arsenal will be monitoring his progress closely.

Could be a good partnership for the club

In other news it could rain today!

Agreed. Would like to see him get some game time in the first team, but if he’s only going to get a few minutes here and there, then put him out on loan to somewhere that will definitely play him 25-30 times in a season if not more.

A reasonable move from the club. We’ve got lots of youngsters coming through the academy but the club can only field 11 at any time. Give the boys some playing experience, in La Liga no less. Betis can get a pick of anyone in our academy without having to splash the cash. Win-win.

Argghh, sending players off to sunny Andalusia where they will quickly realise that there is more to life than repeated rainfall, being glassed by yobs at the pub, some soggy chips and a leering chav bird trying it on at the bus stop, and be impossible to bring back to Ingerlund.

hmmm, tell me more about this leering chav bird …

You realise of course that not everyone is from Grimly-upon-Bumfuck like you are?

Life is different here. We have these things called Gastropubs…

Actually made me laugh out loud. Well done.

Possibly the most middle class comeback I have ever seen. Although it was humorous, and anyone who uses the word ‘chav’ is clearly a bit of a stuck up prick. What I’m trying to say is that I found your comment both humorous and to the point.

I thought I would drag it out though, so as to waste some time between wanks.

Yet another person who believes the folklore.

Anybody else who claims London is always wet will be locked in a room with Harry the Twitch and not let out until they have taught him to accept his share of the blame whenever one of his many teams gets relegated.

Piss off benzed. Englands great! Fuck off out if you dont like it.

Famous English ability to take the piss outof ourselves there

cut him some slack, he’s just found out his bird is back to picking up strangers at the bus stop again.

Saw him play in la Liga vs RM and he was quite a handful for their defence. He got injured in that game and i was quite sad for him he was so young!
I don’t know how he’s done since coming back but he seems a real talent

I like sending the special talents to lower premier league clubs. Did wonders for wilshire and miyaichi. Plus I like being able to watch them and possibly help us out by beating sp*rs.

Id really like joel campbell igansi miquel or eisfeld to go on loan to cardiff or something where theyd be getting first team football.

Miyachi? Na mate, he’s had a woeful experience on loan, especially this season. Whether it’s La Liga or the Championship, get them racking up the minutes on an actual football pitch!!!

ryo was extraordinary considering his age and inability to speak dutch or english in feyenoord, unfortunately injured in wigan. what the hell are you talking about?
could you imagine being picked straight away from high school to go to one of the biggest league in the world with no friends and shit?

Don’t worry he can get pussy. He got mad knots in his socks.

Just want to thank everyone — and I mean *everyone* — for these bloody hilarious comments dahhling.

I’ve watched a lot of this kid and Real Betis of late since I heard about this possible deal between the clubs. And I have to say this kid Vadillo has all the potential to be something special in the long run. He’s got good pace, can dribble through crowds, has a good shot, yet he’s still raw, can overdribble at times, and undersized for now hence the Cristiano Ronaldo comparison as their similar at that young age. Wenger and Arsenal are incredibly smart if this first option clause is put in place because he’s by far their best player… Read more »