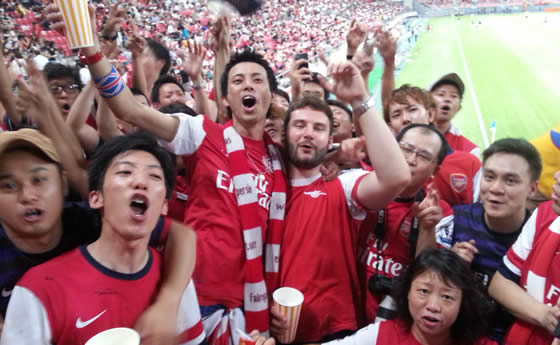 Our correspondent, @PlNNERS, is in Japan, caught the game today against Nagoya Grampus, and sends this report to give us a flavour of the day and the tour. Take it away …

During my admittedly short time here, Japan has not been short of surprises. A painfully cold jet of water up my arse was a particular highlight, as was the painfully sincere apology from four railway staff after I facetiously pointed out that one of their trains was four seconds late. What didn’t surprise me, and shouldn’t surprise you, was the passion and knowledge of the fans over here.

To say the fans are passionate would be like saying Arsenal are sometimes slightly circumspect about spending money. As if to illustrate this point there was a shirt being sold on the side of the road today with the unfamiliar name of Danny Higginbotham on the back. Embracing such utter ineptitude can either be a sign of complete idiocy – like my continued soft spot for Gervinho – or true passion.

The passion was further exemplified by the queue that snaked around the entire stadium 4 hours before kick off time. The justification for this was so “we can get comfortable” but unless the entrants were planning on building a fort, I failed to understand quite how early they wanted to get in. I wandered in a relative latecomer at about two hours before the Arsenal match, into unreserved seating and plentiful beer. It’s a hard job, but somebody’s got to do it.

As for the where we actually were, Nagoya Grampus Eight confusingly play in Toyota City, named after the car manufacturer. Think Birmingham without the architecture, grating accent and shite football clubs. The stadium peered above the city like a reluctant cathedral, just the other side of a futuristic bridge that reminded you exactly where you were. Toyota City was a welcome relief from Kyoto, where I felt like I was slowly melting with every laboured movement of my leg, but it was still reasonably warm and humid. That being said, I was made to feel truly at home on entering the stadium as it decided to truly piss in down in biblical fashion, forcing the kind of exodus last seen when QPR got relegated.

Arsene Wenger is revered rather than reviled in Japan and as such, his side that won the Japanese title in the mid 90’s played themselves in a reasonably enjoyable kickabout. Dragan Stojkovic, Nagoya boss, future Arsenal boss (supposedly) and apparent pie hoarder scored twice and showed some exceptional touches to suggest he could be just like the new signing that we need in front of a large chunk of home support.

Arsenal, as some kind hearted souls on the comments section pointed out, did also came here for some merchandise dollar and judging by the queues for the pop-up shops and the contented grins of the Arsenal representatives I bumped into inside the ground (before they were amusingly soaked by a sudden sheet of rain) it was a good day’s work for all concerned.

For the game itself I was lucky to be sat behind Arsenal Japan, the official fan club and without doubt the most knowledgeable and passionate fans I have ever come across. Their encyclopaedic knowledge of the club put me and some nearby expats (Clock End Sniper and goonermichael for those interested) to shame, as did their ability to create a song for the most bit-part of Arsenal players. Their song for Ignasi Miquel was great but sadly lost in a haze of local beer.

Whilst some of them lived in familiar parts of London and had come back for the game – I had a good conversation about the relative merits of Cally Road with one Japanese Gooner – many others make a huge sacrifice to even watch games live, risking redundancy and poor grades with every half they watch. None of them saw supporting our great club as a chore, and they belted out every song you could think of, including the fruity tribute to our Teutonic centre back and exactly what they thought of Tottenham, much to everyone’s amazement and amusement. Even after eight years of no trophies (just a little soundbite I heard somewhere) they all burst with pride with our cannon on their chest, and I made some painful comparisons with the shocking support at some of our home matches.

The game itself was a haze of local hospitality and support from 200 local fan club members that puts the Emirates to shame. A favourite was the chorus “sit down for security” after one particularly heavy handed guard suggested our hatred of Spurs didn’t require everyone to stand on their seats. Arsenal kept the ball as only we do after scoring an early goal and Gedion Zelalem continued his inexorable rise to being Arsenal’s next Big Thing after playing a couple of neat through balls. Even Mikel Arteta, looking like a sweaty Legoman, had the heart to hand the ball to local lad Ryo to convert a penalty on what was near enough a perfect night for the Arsenal. We left the stadium with some new Aussie mates, some over from Sydney and some expats, and did our best to conform to the Brits Abroad stereotype by staggering into McDonalds far too late for anyone’s liking.

The reception both my old man and I received, as well as that received by the team, was truly humbling. The dedication these people have makes you wonder about the grumblers at the Emirates who would moan if they were shitting gold, and actually reminded me of why we follow the Arsenal over land and sea (and Leicester). It’s unlikely Arsenal will wait another 48 years before they return to the Land of the Rising Sun and it’s only likely to be 48 days before I plan my return.

Thanks to everyone that got in touch, and see some of you in Finland.

Thanks for that. I was once again really impressed with Ramsey. What a great pre-season he’s having, building on that stellar form in the latter half of last season (when he was moved to a more defensive position). Zelalem showed us why he’s been given the label “next Cesc” (however unhelpful that is), but also why we shouldn’t get carried away with the epithets. His vision is sublime, but he was very easily muscled off the ball today, by opponents who were clearly a step above Indonesia and Vietnam. But he’s got the talent, that’s for sure. Really excited to… Read more »

£70mil? who said that?
Reply to  Bunburyist

I think we shoukd do a

Zelalem yes, awesome, had never heard of him. Who needs Cesc. Let’s hope ManU spend millions of Glazier debts and sign him. Ramsey?: I saw the Indonesia and Nagoya games on freeview, and extended highlights of Vietnam. He was shocking. Will he o9nce again start the season badly and improve towards the end? Rosicky: stunningly superb in all 3 games. A new but faster lLam Brady. About time. Let’shope he can stay both injuryfree and in goalscoring form. Wonderful diary. No wonder Wenger says he wants to retire to Japan when the day comes. Stoykovich: was he a Bulgarian World… Read more »

Lucky bastard. Sounds like you had a great time. Would’ve loved to have gone.

This just goes to show that not all foreign fans are “glory hunters with no knowledge” or “not proper football fans.”

I’m from Pakistan, living in the USA, and both back home and here in the States, just like other countries around the world, there are plenty of excellent Arsenal fans.

It’s my Man Utd supporting cousins who get on my nerves. We need to start winning things again just so the sheer number United and Farca glory hunters decrease.

Zelalem is the first Zelalem.

Great article. Looking forward to the game Friday and the Finland game.

Should be compulsory reading for the moaners. Well played sir.

damn, when are the gunners coming to the states. I reckon there are more arsenal fans here than any epl team.

The Arsenal pubs in NYC and Chicago are by far better than any other club’s I’ve seen Stateside. Oh the memorable times when a Barca fan dared to walk by in NYC sporting those awful stripes… during an Arsenal game. HEH.

what are some good arsenal pubs in nyc?

Sorry even I think its getting old now….

hi there- if any of you care my twitter handle is actually @PlNNERS (small L, not capital I)- I don’t have a protected profile. I’m just not important enough…

Why is it that, every time the japanese team made a substitution, the same player was going back on?

Isn’t it ironic that Japanese cartoon characters have massive eyes?

I don’t like deleting things like that because I think that let’s people away with it, almost. It’s important that other people can see what’s being said so they can make their minds up about the people who post that kinda stuff.

Arsenal Australia represent! Sounds like it was a magnificent night! C’mon you Gunners!!

[…] For some flavour of Japan, check out the tour diary on Arseblog News. […]