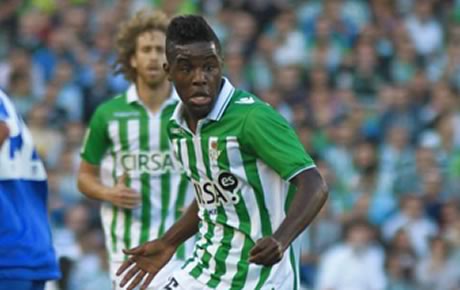 Joel Campbell is likely to go out on loan again despite receiving a work permit which allows him to play for Arsenal this season.

The Costa Rican striker has spent the last two seasons on loan, at Lorient in Ligue 1 and last season at Real Betis is La Liga, after the protracted saga to sign him in the summer of 2011.

Any expectation that he might be incorporated into Arsene Wenger’s side for the upcoming campaign appeared to be misplaced as his agent told ESPN that he was working with the club to find him somewhere to play.

“Joel has received his visa and I am in London with him working on his future. I had meetings with Arsenal and we are working on his next destination.”

It seems likely that the Gunners will want him to go on loan in England, to adapt to the football here, and Crystal Palace were last month linked with a season long deal.

The guys who I’d like to have their visas more than anyone else, apart from Edward Snowden, is Wellington Silva! This is great news nonetheless.

Here’s a rather unrelated, but quite interesting video:

suarez’s not taking himself too seriously I see ^^

This is all getting on my tits. The only transfer related news seems to come from players going out. We’re certainly walking the walk when it comes to getting rid of the ‘deadwood’ and trying to sort out loan moves for the youngsters but all that talk of being aggressive this summer and spending ‘big’ with our £70m war chest… with a month to go; all our targets are looking elsewhere, our chief exec is on fucking tour, Wenger now saying we’re not close to signing anyone (and I agree with Blogs in that I believe him). This is the… Read more »

This post is about another Arsenal playing being linked away from the club, hence what provoked my angry post.

So, Sid, go fuck yourself.

Aww diddums is mummy’s delicate little flower all upset coz that naughty Mr Wenger hasnt bought you a shiny new toy to play with??? Ahh bless….

Grow a pair, then grow some hair on them you baby.

Seriously, both of you give it a rest, please.

Was hoping he would be offloaded for good, but at least he wouldn’t be a waste of space in the present time. But for now at least: Good Riddance!

You just don’t like anything do you?
When your missus cooks you dinner do you go “I’m not eating that crap”. When you’ve finished in the sack do you say “well that was shit.”

indonesian gooner you are a fool if cant see or havent heard about this giys talent. No reason i can think of to get rid of him permanently

Shut up. If u want arsenal to be a top team we have no place for him. Simple as that. Bring on higuain & suarez!

Indonesian gooner, you are embarrassing your countrymen with that name. Campbell was one of the too young players in la liga and a loan is needed to see whether he can cut it in the premiership.

We dont need players who we can ‘see’ if they make it, weve had that for 8 years now. We need top class & proven at the highest level. Away with him. If he becomes good then we can buy him.

I’m confused by this, we sign this hot prospect 2 years ago and he spends two successful seasons on loan in two of Europes top leagues. But then we go and sign a French under 20 player, someone that seems to have even less of a reputation than JC when he first joined us. What are we playing at here?

It Is What It Is
Reply to  Mutsa Magadah

Yaya is a striker, Joel Campbell is a forward.
Yaya plays down the middle, JC can play RLC.

XMarksTheCoq
Reply to  It Is What It Is

Haha, because we all know the Football Manager database is the footballing gospel… But seriously, I do rate Joel – hope he gets a chance to shine at a club in the Prem.

Er, what’s your point? Are we only allowed one young, talented attacking player? Adding another young, promising forward has nothing to do with Campbell.

the few times I have watched him he hasn’t quite cut it.Any youngster must posses that element of surprise if he really wants to make it at the biggest stage, and sadlyJC comes short.

Please, folks, try and engage in adult discourse without resorting to name calling. Best to just ignore, if possible.

He is a top player.he should be loaned to christal palace

This is what 8 years of a questionable transfer policy brings…genuinely dissapointed looking at the comments on this post. I am as frustrated as anyone with our lack of activity, present and hostoric but let’s not forget, through that period we have seen Cazorla, Koscielny, Sanga, Arteta and Walcott arrive; all of whom are first team players that would get into most teams. The in-fighting and bitching is embarassing! If you’re not happy, fine, say so but don’t start tearing chuncks out of each other. If you can’t my sisters having a tea party in her wendy house, you’ll fit… Read more »

can we play dress up after the tea party?

Fancy dress? Nice one, I’m going as Eddie Kelly from the ’71 Cup Final

Arseblog, is it still ok to call John Terry a cunt? Pleeeeesea say its still ok, he really is a cunt, so its factual correct and everything. 😉

The outs continue, no ins in | Arseblog … an Arsenal blog

[…] Joel Campbell has received a work permit but his agent has made it pretty clear that he’s likely to go out on loan again. You might remember Dick Law spent the best part of a week in Costa Rica trying to find his real […]