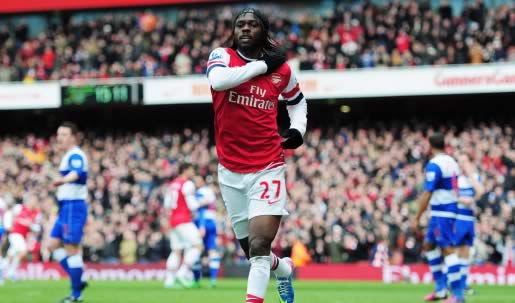 Various media reports in France suggest Gervinho is a target for Roma.

The Italian side are ready to make a move for the Ivorian who could link up with former manager, Rudi Garcia. The Frenchman was appointed Roma boss this summer, and it was under his tutelage at Lille that Gervinho flourished.

Having failed to convince consistently at Arsenal, the winger could be loaned for the season but it remains to be seen if we’re interested in that kind of a deal for a player who cost £8m two years ago.

He’s been strongly linked with a move back to France, and spoke of Marseille’s interest a few weeks ago, saying, “Marseille is one of the leading French clubs, and I have a good relationship with some people there. I can not say yes or no, but it is always flattering for a player to know that there are a lot of clubs who are interested in him.

He also failed to rule out a move from the Emirates, “If I want a new start, I will not fail to garner interest.”

With the club about to depart on the Asia tour, it remains to be seen if something will be done in the short-term, but there’s increasing smoke about his departure, if not yet any real fire.

If he goes this summer then a loan is pointless! Its sell him or keep him as a loan is of no benefit to the Arsenal!

Agreed in full. As the only player who has a good chance of leaving that we could actually get a decent transfer fee for, it needs to be a permanent move.

Sell, loan, discard him in the woods. I don’t care!! I don’t think I can stand to see him in an Arsenal shirt again :/

On an unrelated note, is there anyone who would like to sign flamini on a free? To add squad depth and strength in the midfield area (seeing as we don’t seem close to signing a DM at the moment)?

No place for mercenaries here man, no place.

I’d only take him back if he were to make the same wages when he was still with us.

Even putting aside for one moment the “mercenary” aspect, signing him would be largely pointless from a footballing point of view. His career might not have Hlebbed out completely, but these days he’s a shadow of the player he became during his time at Arsenal. It’s hard to think of who would be more underwhelming as a midfield acquisition: Barry or Flamini.

The Lawyer
Reply to  MERTESCIELNY

Might be a half decent, unpredictable, option off the bench, but really hasn’t got the mental strenff to cut it with us consistently, so….

A Message To You Rudi…….take him.

Point 2 … There really has to be a point 2. Otherwise point 1 is stupid.

I actually like Gervinho and still feel he can be a very good player, not his striking ability but as a winger he gives us a different option. Also no fucking African Cup of Nation this time around to fuck with his head(or forehead)

I too also like Gervinho but for the sake of his own career he should go to Roma. Maybe we can get Erik Lamela on some sort of swap deal, he’s really good and highly rated. He has no champions league football so we can offer him that.

Sell him or keep him, no loan please. we still cant get rid of Bendtner.

Mert…I’d rather buy quality than take another free agent gamble. Although, I’ll rather take Flamini than Barry.

Off topic but why are there reports that Arsenal fans are being discouraged to buy no4 mertesaker shirts? The optimist in me….

How about we include TGSTEL in the deal and reduce the transfer fee. Everyone’s a winner. Except maybe Roma…

has he left yet?

[…] various outlets in France are reporting that Gervinho is a target for Roma. His former Lille manager, Rudi Garcia, is the new boss there, and he’s somebody who, in […]

Gerv could make a good squad player if only he found some consistency to his game. Selling him without a quality replacement (e.g Nani) would really defeat the purpose. Unless Gnabry is ready to step or Chambo gets added game time in that position.

Nani is a quality player. He’s currently riding the pine at United why not sign him up. I feel that holier than thou attitude most Arsenal fans have is ridiculous. Can’t sign Rooney coz his a cunt,Can’t sign Nani coz he played for united, can’t sign So and So coz he played for Cunt United or the spuds or whatever……. Grow the fuck up. RVP signed for United and won them a title….Get to grips with reality.

Nani is way more inconsistent than Theo. He’s a waste of space and I don’t want him moonwalking around the Emirates on more than one saturday a year if it can be helped. The 80s Michael Jackson faced gimp. The reason I wouldn’t want him is that he fails to get into a United team most of the time ahead of Young or Valencia neither of whom are that good either.

Life at Arsenal will not be affected by Girvinho’s situation. Three quality signings will be made and Arsenal will be much more of a threat this season.

I know this is just asking for dislikes, but I’d take Flamini on a free.

ONLY if the mercenary has learnt his lesson, ready to take a paycut, be a back up, and agrees that he is an idiot for leaving Arsenal.

He’s struggling to make the 1st team now with the dearth of options we have upfront.
1 or 2 quality signings to beef up the attacking side of things and he’ll find it hard to start

For the good of his career, he should leave.
Hasn’t really worked out, but at least we should be able to get some ok cash for him if he does leave in this window

I’ve got an idea, why don’t we buy Gonzalo Higuain? That would be a good signing.

I’d hesitate in selling Gervinho. Let’s face it, when it comes down to our wingers. Walcott still needs to convince me that he has a footballing brain (don’t get wrong, last few years he improved substantially, this year he could shine into a world class player). The Ox, same thing reversed really. Football fantastic, finishing needs to be polished. Podolski, sheer strength and power. Dat left foot. Yet plays 60 minutes (haven’t heard in a while of news that he has a surgery scheduled). Gervinho, he’s got trickery combined with pace our other wingers don’t have. Chelsea goal. If he… Read more »

I’d pay them to take him.

Gervinho is underrated. Anyone who thinks walcott, ox, gnarby is better than gervinho as a WINGER is out of their damn minds. On his day, gervinho is one of the best players in our team. I remember when he was ripping ligue 1 alongside hazard and sow. Admitted he’s put in some inconsistent displays; but thats cos he’s had his season interrupted by afcon and injuries. I think one of his main problem is his poor mentality. He easily gets weighed down when fans boo him. Personally i have a feeling we might regret it if we sell him. P.S… Read more »

We would not have got fourth without Gervinho. Fact.

True. Without him we would have finished third.

Gervinho: another brilliant signing by the managerial genius that is Arsene Wenger. If this is true then it’s more great news. Whether he goes on loan or a permanent deal it’s another piece of deadwood off the books and away from a the club. He was never, ever good enough to play for us. But what about new signings? With precisely 37 days before our first competitive game of the season – and with everybody and his mother agreeing that wee need at least five quality players – we have signed just one injury-prone French-African junior striker. Fantastic preparation for… Read more »

I think your high levels of bodyfat could be influencing your hormones. Large amounts of fat increase oestrogen levels in the blood and reduce testosterone levels which could be the reason you always seem to be so down and cynical.

i like the idea of gervinho in theory – he takes people on and tries to make something happen rather than just passing it – but i just dont think he’s been able to handle the pressure of playing for us.

he seems unable to be calm and collected.
he just ends of panicking, and that increases the pressure on himself internally and externally, and its hard to feel that it will change.

This article contains a lot of the world “fail”. How fitting.

What’s Gervinos address? I have his plane ticket to Rome in my hand.

flog him and get Nani instead

He is not in the travelling squad because of sickness… We know that kind of sickness. Poor Gervinho, I will miss him.

Oh yeah the “Roma move”. That’s the move where he runs around like a headless chicken arms and legs akimbo before missing from one metre out. Think its Gunner be the make “MoreRooma ” soon 🙂

I like the valuable information you supply for your articles.
I will bookmark your weblog and take a look at again right here regularly.
I am slightly sure I’ll be told many new stuff right right here! Good luck for the following!

Hi, this weekend is good in support of me, for
the reason that this occasion i am reading this fantastic informative post here at my home.