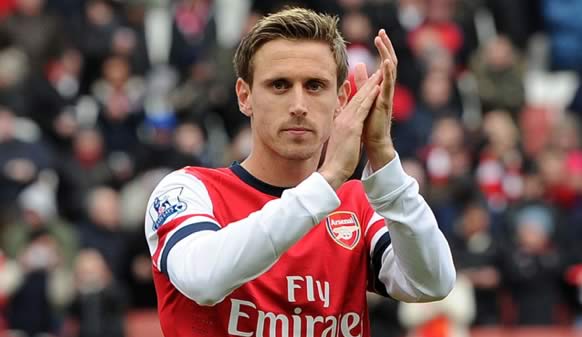 Arsene Wenger has admitted that Nacho Monreal will miss the start of the season, having picked up an injury somewhere between the end of last season and now.

The ex-Malaga man went away on the Confederations Crap with Spain, which seems the most likely place for him to have knackered himself, but let’s not forget Spanish keeper Canizares who missed the World Cup when he dropped a bottle of aftershave on his foot.

The Arsenal manager confirmed Monreal’s problem and admitted it leaves him short of options at left back.

“He has had an injection and it looks like he will not be able to start the season,” he said. “We have lost one left back, and that’s the position where we’re a bit exposed at the moment because Vermaelen can play there, he’s injured. Monreal plays there, he’s injured.

“We’ve only Kieran at the moment who can play there.”

And given Gibbs propensity for injury throughout his short career it poses something of a problem for Wenger. Andre Santos was released to Flamengo during the week, and highly rated youngster Jernade Meade let his contract run out, seeing no way past Gibbs and Monreal.

With a shortage of centre-halves too, only Per Mertesacker is fit at this point, it wouldn’t be at all surprising if a versatile, left footed defender shot straight to the top of Arsenal’s shopping list.

This just keeps getting worse and worse. At this rate we’d be down to bare bones by season start. Really desperate for some optimistic news.

We are cursed. Don’t want to be too superstitious but maybe we should sign a player with the name Jesus. Just in case.

Based on the exclamations I heard last season we have a number of players called Jesus (surname: Maryanjoseph).

seems to be a few players called Fucksake as well.

Four of them last time I looked…..

Just keep rereading the bit about Canizares dropping the aftershave on his foot.

We’ve got Ramsey as cover in every position

Yes any Arsenal player getting injured is bad news. But at the moment Gibbs is no1 and he is not injured so we have no problem for round 1. It’s like saying if Arteta, Ramsey, Rosicky, Wilshere get injured we are screwed! So relax.

We still need to sign players, but not a LB.

well gibbs has a bad injury record (cross finger he doesnt get injured) and vemaelen is out too so we haven anyone to cover and i dont think anyone in under 21 team is good enough too. maybe sagna will be ask to cover , still that leave us short in defence so maybe wenger will have to buy one extra player there

Quick! Bouldy! Get your kit on!

Oh dear. Higuain joining Napoli by the looks of it, too.

And the hits they keep on coming.

Thank Christ we can rely on Gibbs to stay fit.

To be rational for a moment, this could happen anytime, and no-one in their right mind thinks we should have kept Santos, or that LB is really a problem position with the 2 quality players we have there.

So why the fuck haven’t we signed a 4th CB or fuckin Higuain yet FFS??

Ah bollocks to it, can’t do rational this transfer window.

some dumb american
Reply to  Mooro

Have we done rational in other transfer windows?

I think even god is fed up with Wenger`s excuses for not buying this summer.

I think He’s fed up with people using a little “g”.

Chamackh could do a job there!

A versatile left-footed DM would be a great signing. Much needed.

At the moment if Gibbs got injured he’d play Miquel there I imagine.

All the more reason to re-sign Flamini. It will hack him off being dumped at left back again which will serve him right for running down his contract 5 years ago.

[…] injury worries at the back continue with the news that Nacho Monreal is going to miss the start of the season with a back problem. Arsene Wenger […]

Looking for positives: at least the season is still open and AW can add cover. It’s not too late. Also, at least there’s evidence of focus on our shortcomings other than the striker position.

Focus from the fans, not the board.

want them arteta and den giroud to get injured as wel, mayb, just mayb wenger might be moved to spend some dough. Bloody moron of a manager.

Well if our whole first team squad gets injured then he will have to buy someone.

Obviously no one can legislate for injuries, you have to deal with them as they happen.

Makes no sense having three left full backs in case the first two get injured.

You can’t have a squad of 50 in case of injuries (unless your man shitty).

You have your squad of about 22-25 players & hope that your not unfortunate enough to get a shed load of injuries all at the same time.

Of course we cannot have 50 players. I didn’t say I wanted another left back.

I say, why sign another left back, just because we had Monreal injured? Why do we only sign players (Arteta when Wilshere got injured), when someone suffers an injury?

Why not be pro-active and have a good squad? We need a midfielder, but should we really need an injury to make that signing?

I think you didn’t understand my point. Prat.

I would have given you a thumbs up, but then you needlessly insulted him.

Utter horseshit. You need a 22-25 squad with 11 premier players, 5-6 very good squad players and 5-7 ok players. Nobody talked about 50-man squad. Wenger is just freaking out when it’s about rotating.

Good thing we have Vermaelen as cover for Gibbs oh wait!! and this Gibbs isn’t he as injury prone as ever.

Oh no problem Santos no matter how shit he is will help, what he’s gone? oh well step up Jermaene Meade! sir….sir swansea…have snapped him up..

Thing is we want to start the season well and for the 1st time in a long time I finally thought it happening. (they remain just that THOUGHTS.)

Well, I don’t wish injuries on our team, but if history is anything to go by this will actually make the club do something. They might actually go and sign someone in defence now.

I mean, if they didn’t, they’d be fucking stupid, and Arsene’s not like that, right?

Maybe we should all just relax and wish Monreal a speedy recovery.

What I really want to know is …. What will Rambling Pete have to say about all this?

Looks like we will miss out on higuain. For me its not soley about getting a forward, we need at least 3 quality players to compete a forward alone was never going to be enough.
And if we keep getting injuries the way we are and with those that have left the club there is an argument to say we need maybe 5 or 6 players.
And yet we still do fuck all.

need 5 or 6 players for what? the champions league? or the epl title?

Last time I looked we where in both.

We should always have three keepers, three right backs, three left backs and five centre backs and three strikers. You need ten midfielders. Only 27 players. We do have 27 players but TGSTEL, Chamakh, Park, Coquelin, Frimpong, Djourou and Ryo, are on loan or not considered good enough while Diaby lives in the Medical room and remember last season we also had Arshavin, Squilacci Santos and Denilson on the books. We are being punished for building a big pile of deadwood. We hear a lot about Arsenals youth development, well this a golden opportunity to prove that youth development is… Read more »

TV5 cannot and is not able to play at LB, he’s positionally inept at the back and cant contribute in attack. I’d rather play Ignasi Miquel.

inept? hmmm how come he played for ajax then? captain too…

Has everyone forgotten that Jenkinson is able to cover at LB should he be needed?

And who will cover sagna at right back? Since sagna is off covering our centre back shortage…..at least we can still put together 11 players #sigh of relief#

No he can’t… he looks like an injured crab at left back.

Actually Sagna can cover at LB.

Arsene: Law and Order, get on the blower to Flamengo! We need that cuddly maverick back now!

Nope. That’s actually “bloody arsenal”. We have a host of forward playing young guyz coming through and so we get all our injuries at the back(pun intended). Typical!

Referring to the fact that the injuries are at the back and to the backs of the players.
But of coz u ar Arsene’s nose…..figures

Pretty sure jenks has said he can play centre back and left back.. He’ll give 110% no matter what. Tbh we should have kept djourou who isn’t a bad player IMO! I’m not too worried at all, if we play like we did at the back end of last season were our defence wasn’t so exposed and prone to errors we’ll be fine with miquel as 4th choice if he has to play a bit.

Would have been the perfect opportunity for Meade to step up (assuming something was to happen to Gibbs) but he has decided to try his luck at Swansea.

Share the same thought as J0hnire, Jenks can play as a left back. Not all bad to know we’ve got auxiliary type players. COYG!

Miquel Ignasi will cover at left back. He had a few games there last season. Did ok. If he is not being sent out on loan, at least give the lad some game time to develop.

Don’t worry when Monreal comes back he’ll be like a new singing, along with Koscileny.

that’s getting old fast in my books.

Kondogbia is left footed, plays defensive midfield and has played left back before. Might be the player we go for.