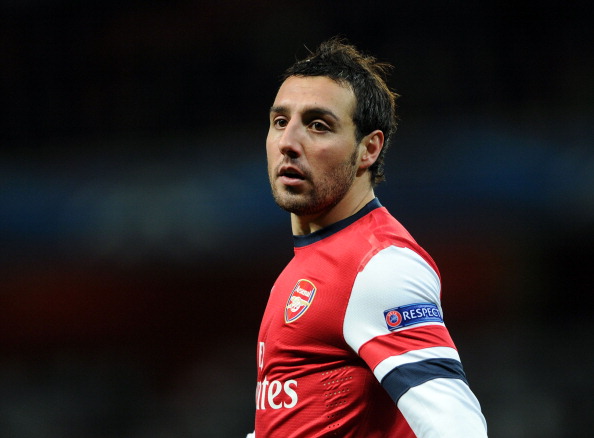 Santi Cazorla looks set to miss Arsenal’s Champions League clash at home to Napoli next Tuesday but says he hopes to be back in time for the trip to West Bromwich Albion on 6 October.

The Spaniard has been sidelined with an ankle problem after suffering an injury in training 12 days ago but is thought to be out of a protective boot.

Speaking to supporters as part of the Arsenal Twitter Takeover this morning, Santi provided a short update on his fitness stating:

“I will be fit maybe in one week, I hope I can play at West Brom.”

The news on Theo Walcott is also positive after Arsene Wenger revealed last night that the England man was on his way back from Germany after a successful operation on his stomach problem.

“Walcott had surgery and it went very well. He’s coming back (from Germany) Thursday so it’s what we expected there were no complications.”

Ahead of last night’s Capital One Cup win at the Hawthorns, the boss had also spoken of the other injured parties.

“Rosicky is the first back [of the injured players], but not in time for this week. Next week we will start to speak about that. He could come back in the squad for Sunday or Monday.”

On the likes of Podolski, Chamberlain and Diaby he added: “They are doing well but they are nowhere near ready. The next one back [of those three] might be Lukas. Alex will be one and a half months more.”

Bar The Ox (not considering Diaby since he’s really out for a long time..), we’ll have everyone else back post the international break. Hope this interlull keeps all our players safe. The most important period of the season is post the interlull – Dortmund (H & A), Chelsea in League Cup, Liverpool and United in the PL. Need the strongest squad to come out with flying colours come mid-November.

Ithink the injuries will keep our players away from the interlull, correct?

Interlull will have fit players playing for their countries.

Jakob A
Reply to  Weng(unn)er

When will Podolski return?

arsesicky
Reply to  Jakob A

after he finishes frolicking in his liederhosen, obviously

Silverstre for the Ballon d'OR

I love you Santi.

Damn it , looks like I’ve to wait longer to see Santi and Ozil plays together. But Rosicky coming back for Napoli is a good news. Hope the lads continue their fine form during this even with all the injuries problem.

Santi could live in a protective boot – he is 63% ankles as it is.

get better you fantastic little genius…

I think I’d like to see Jack Wilshere play every match in protective boots! I’d feel a lot happier…

Cannot wait to see Cazorla and Ozil spoil Giroud and Theo with their beautiful throughballs in the final third. Cannot.

Have to wait to see Cazorla and
Ozil spoil Giroud and Theo
with their beautiful
throughballs in the final third.
Have to.

The superlatives to define just how much I love santi Cazorla are not yet in the dictionary for me…..

Games like these that makes watching football the greatest thing in the world. Especially when it’s The Arsenal!

Be very exciting to see Santi and Özil on the same pitch, we are badly in need of options for the two attacking wide roles.

Defenders will have a nightmare trying to stop them interchanging passes and positions down the left!

I have been missed you Santi.

I can’t wait to see that Santi and Ozil play together.

Maybe, they will be a fantastic duo.

I have been missed you Santi.

I can’t wait to see that Santi and Ozil play together.

Maybe, they will be fantastic duo.

ist de tru. I am miss yim too

CountLeaf
Reply to  A cùnt for £100m? What a waste of money

i can stand people ignoring grammar, but get a fucking grip on our Club’s players’ names.

Santi + Ozil + Ramsey = The best midfield in the world?

I see Arsenal winning a silver-ware this season.

Santi Clauzorla is coming to town. What a wicked Christmas present that is for all of us. And it’s still September!

I would love it if he is the one to curl home the free-kick that wins the Champione League for us.

No more than one Santi Cazorla fellas!

He didn’t even give any special update on Diaby! Hmmmm….

Well, at least he’ll be rested as it was much needed for him.

Is there an exact date where Podolski return?

all hail santi, get well soon you brilliant bastard!

just made me day

Tough time deciding whose jersey should i get. There are soo many admirable guys in our team!!
Jenko, Szcz(in his own crazy way),Giroud,Kos,Santi,Rambo,Ozil,Poldi… the list is too long!