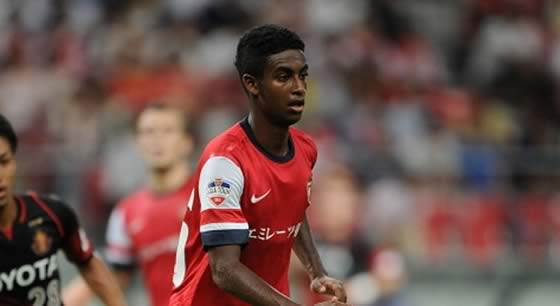 Gedion Zelalem has taken to Twitter to reveal he’s picked up an injury which will keep him out for up to two months.

The 16-year-old German youth international, who was recently promoted to Arsene Wenger’s first team squad, didn’t reveal the specifics of the problem but will now have to wait on his competitive debut having impressed in pre-season.

Taking to social media, the star of pre-season revealed:  “Out for 6-8 weeks , Will try to use that to my benefit and get stronger.”

Gedion joins fellow midfielders Abou Diaby, Alex Oxlade-Chamberlain and Mikel Arteta on the sidelines while Lukas Podolski and Thomas Vermaelen are the other long-term absentees.

Arseblog News wishes Gedion all the best with his recovery and lights up a cigar knowing for once we’ve got a £42.5 million replacement up our sleeve.

Bit of a shame, was hoping to see him play against West Brom in the league. Hope he recovers quickly.

That should say league cup, of course.

ah of course, another player gets injured in probably what might turn out to be the most crucial time in his career, he is now, without doubt, an arsenal player.

Not sure you’d call 16/17 the most crucial time of his career, a long-term injury at the point at which he begins to challenge for a first-team spot i.e. 19, 20, 21 would be much more debilitating to his development. He doesn’t have the physical or mental maturity to regularly play yet, but if Jack’s anything to go by the opportunity to work on the physical side of his development while recovering from his injury could be very beneficial to him long-term. Look at the bright side! Anyway, what young player hasn’t had an injury at that point in their… Read more »

Who will play in midfield for the COC though? Frimpong? .. Olsson? Flamini I guess maybe…

Unyoke The Ox
Reply to  Overmars

Real shame though, it would have been great to see him play against a prem team.

Rosicky injured tonight against Italy. Minor thigh strain, apparently, so he should be back in 12-18 months…

Great just great. we have lost yet another promising player to injury. when he comes back and doesn’t miraculously boss the midfield don’t get on his back much like you did with Ramsey. That’s right i’m talking to you…..

Now if I were echo Ozils earlier tweet! “looking forward to london!”

Anybody knows how long will Rosicky be out for?

You’re talking to me, are you. Wow. You got me. Yes, I’m quite sure I was the only one had little faith that Ramsey could resurrect his career after his injury. Excellent memory. What was that, about a full year ago the last time I criticized a Ramsey performance?

I’ll try to remember your pettiness a year from now.. Oh, wait! Only very, very small men would do such a thing.

It’s all you, herold. All you.

Wow….. Rosicky injured as well??
Thats a big blow…… he has been in fine form throughout the season. Was the only one running his bollocks off in the Aston Villa game too.

Get well son Little Mozart. I’m guessing Miyaichi could be seeing some serious game time this season with our injury list. Which is not a bad thing in my opinion. Could be his breakthrough season!

Pipe down Bunburyist or whatever. you were way too vocal when ramsey was still finding his feet, tearing into him in each and every match report. He made you eat your own words hard didn’t he? oh well you were not the only one tbf just hope the lesson is learnt.

Trust me it takes less energy to get behing every team member than it does to bash them. try it sometime.

Gunner From Another Mother
Reply to  Overmars

Mikel Artekkers
Reply to  Gunner From Another Mother

Not worth it, knowing our luck those cunts would probably set out just to break his legs.

Hmmmmn… Am guessing this could be a cover up for an Academic enforced leave, the Lad is obviously still in school and an injury mite probably be the best excuse if he is not seen wen we play our 1st COC match… Anyways goodluck to hime…. We got Özil

Oh ye football gods, who the hell did we offend? What did we do wrong to be inflicted with injuries all the time?!

Was hoping to see him in the Carling Cup but yeah.. We have Ozil

It’s not the Carling Cup, it’s the COCup

For fuck’s sake what do we do to them?!? Do we play the hunger games in training?

richpryor
Reply to  plus a pound!

That should read Battle Royal. Her you go, corrected for you…

Another one for the MASH 4077th (London Colney Branch). I hope Hawkeye Lewin and BJ O’Driscoll don’t give him the Diaby treatment….

this kid is so nice with it i don’t mind, you learn a lot getting injured, let’s just hope he won’t go on to learn as much as old abou

Ivan needs to have a long discussion with the Arsenal medical and training staff.
when was the last time their performance and core competencies we’re benchmarked?
Sorry about the management spiel, but it’s shorthand for shape up lads or well ship you all out.

Why would anyone give this post a negative rating? Year after year, Arsenal are a team plagued by injuries. One wonders if there’s an underlying issue with fitness/training/medical staff.

I hope it doesn’t change by playing for us

Is the double negative on purpose?

My little brother was unable to do sports for a couple of months due to a fairly innocuous fall when he was in his teens. The GP said this happened pretty regularly to kids who push themselves while their still growing.

Are you saying we fire my GP, too?

Caught under the Arsenal injury spell?

Gutted for the boy. Hopefully it’s just a knock.

One correction; Zelalem ist Deutscher (“Zelalem is a German”). His father emigrated to Germany, where Gedion was born; he was not born or raised in Ethiopia.

Sorry for the lad. But I guess this is his official welcome to Arsenal. Youre not properly initiated to play for AFC without at least one long term injury.
Hope he comes back stronger

Heh, I never thought I would see the words “£42.5m replacement” in an Arsenal article, unless it was talking about Barca or Real buying an Arsenal player for £42.5m to replace one of their cunts.

Hopefully he comes back stronger and can make his first team debut this season.

Looks like he could do with bulking up a bit. Mind you I was skinny as fook when I was 16 but agile with it…not so much on either front 15 years later! Good luck Z man!

He could do with building himself up a bit. He can concentrate on that for now. It’s a shame we can’t see him in the cup, but hopefully we’ll still be in it when he comes back.

funny how our players dont just get a knock seem yo just sneeze nowadays and be out for 3 months……….

Sorry for the lad but least ozil plays for arsenal. Cant wait till Sunderland

NEWS FLASH!
Arsenal player out for two months with injury!

Learning the Arsenal Way nice and young I see.

“Gedion joins fellow midfielders Abou Diaby, Alex Oxlade-Chamberlain and Mikel Arteta on the sidelines while Lukas Podolski and Thomas Vermaelen are the other long-term absentees.”

Add Rosicky and Theo to that list after today’s matches. FFS we haven’t even played a match since the window and we’re losing players from our thin squad. How the fuck is it that every international break only Arsenal lose players to injury?

John
Reply to  A Yank

I think Theo should be OK, shame about Tomas though. If only we had someone we could bring in to replace him.. *salivates*

A Yank
Reply to  John

Didn’t see Rosicky’s injury but it was bad enough he had to be subbed off early. Would love some more information is anyone was watching. Can’t get too mad at people that want to play for their country, but can’t believe he hasn’t retired from int’l football given his age and injury record.

Also was seeing on Twitter that Ramsey was hurt, but he wasn’t subbed out of the Wales match, so I can’t think anything there is too bad.

You better! if you’re gonna survive this tough arsenal crowd!. we never understand what injuries can do to a players development. just you ask Ramsey.

I would’ve bet Ozil to come off the bench at best Saturday but now he’s a sure start. geez we can’t afford any more injuries. at least tv5 should be back soon enough to give some relief to the per and kos. as I said before, we needed another cam because santi is forced to play wide and rosicky is the only other cam we had and he doesn’t have a good injury record. those were my exact words and I feel like i f’n jinxed it 🙁

I can not think of one footballer who has had a good injury record as a gunner in recent times. I hope you bounce back soon zelalem, come on now, gedi-up!

Fellow Gooners iv been playing some fifa 13 with Ozil and my god my mushroom tip is all swollen and erect cant imagine what il be like this weekend when i see him actually play.

This is why Wenger said we will be battling for the title in 2 seasons.

Wenger is probably going to buy a world class striker January or next summer with Grenier and probably two more players.

Im telling you guys we are a force again.

I remember we used to laugh at the spuds and sick note anderton…. still, we got Ozil!!!! 😀

uhmm Welcome to the Arsenal Zelalem, here’s hoping it doesn’t turn into a 1 year affair.

OK kid, do what the medical fellas say and get well soon, but in the meantime if you spend your six to eight weeks watching everything Mesut Ozil does in training and during games then it won’t be time lost.

I miss the Coq, he’d have been a great addition to our squad for the COC