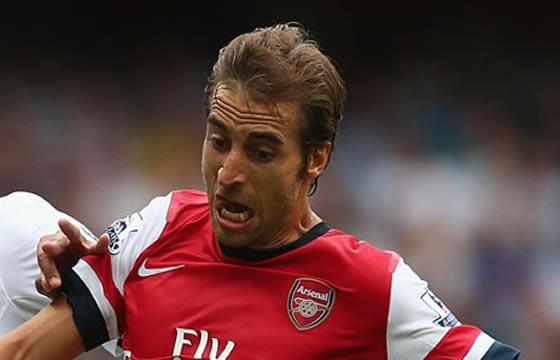 Mathieu Flamini is a doubt for the midweek Champions League clash with Dortmund.

The midfielder suffered a concussion in a 10-90 aerial clash with Norwich’s Alexander Tettey and had to be substituted for his own good.

Reports say Flamini told the Arsenal doctor he was fine and had no intention of going off despite the fact he was seeing two of everything.

And according to Arsene Wenger, the fact that he’s suffered a head injury means he could well miss the game on Tuesday night.

“He had concussion,” said the boss. “He had double vision, so on the advice of the doctor I took him off because I did not want to take any gamble.

“I don’t know if he’ll be available for Dortmund, it depends now what the doctors will decide. Sometimes they are not allowed to play for five days, it depends how big the concussion was.”

Arsenal’s game was affected by Flamini’s departure and it took some time for them to find their rhythm again, but if we had to bet money on his participation on Tuesday, we’d put a few bob on him playing.

I mean, there was no brain leaking out or anything. It was just that his brain got smashed around inside his head a bit.

He’ll walk it off.

He’s hard as hell. And he seems to have the cold eyes of a killer, I don’t remember that from last time.

And people wanted a massive lump of flesh (Tiote, Diame..). Ours is smaller, Frencher and significantly more effective. Not to mention scary.

…and ours is a judo black belt, so he can handle himself if needs be.

Rufusstan
Reply to  Zorro in the box

Watching the game it was one of those moments for me where everything seems to slow down. You can see exactly what is going to happen, and are almost flinching before it happened.

As a bit of an old cynic, two thoughts were going through my mind at the time: that Matty had decided it was time for his: ‘remember, don’t fuck with me’ challenge’, or had remembered that he needed a yellow and that looked a good opportunity.

master floda
Reply to  Zorro in the box

and don’t forget: he was free!

He must’ve been suffering from concussion to even go in for that header I’m the first place!

He needs to sit this one out, concussion is not gone taken lightly. Whatever they score, we’ll score one more!

The ghost of Peter Storey
Reply to  Oshada

Having been concussed in a similar manner to The Flamster I can tell you that it took me nearly a week to fully recover. Not that that information is at all relevant and has absolutely no bearing on what he does.

*not to be taken of course. Silly phone.

Must have been an epidemic of concussion – Norwich defenders where seeing three Jack Wilsheres, two ozils and about 6 aaron ramseys

The way he headbutted the ground. good to see all three of them alright.

I sure know Flamini would be fine and fit for Dortmund because he’s got to be on that game.His absence will cost us damages just like we nearly got with Norwich.

What the fuck? He had a concussion and saw 2 of everything and he still carried on? FLAMINI YOU ARE DA BOSS. But get well soon! We need you!

It’s no biggie, you just tackle both of the players and get both balls, simple.

Can see a Cult following over flamini ‘Tougher than a brick sh*t house’ ness… not to far from the Chuck Norris jokes we are all familiar with How can you tell when Flamini has Consussion.. he pass it to the opposition only so he can “F*ck you” tackle them twice! Flamini is the reason Wally is hiding, apparently due to the four eye’d nerd not deserve to wear red and white! When John Terry goes to bed, he checks under the bed and the closet for Flamini and lastly Flamini is currently suing NBC, claiming Law and Order are trademarked… Read more »

How do you even try to trick a doctor to letting you stay on when you’re concussed?

“Mathieu, how many fingers do you see?”

Hard as nails is our Matt. He’ll be back no problem for Dortmund, that’s just the sort of guy he is. If Wenger hadn’t decided to take him off he would have played on with a concussion.

Good luck to the doctor that tells him he’s not fit to play.

He’ll soon find himself the proud owner of a second arseole.

Mayor of the Woolwich

Wakes up with a boner. Thanks Arsenal.

I bet he is going through some pain but as an Arsenal fan it fills me with joy to know that one of our players got a concussion and wanted to play on. I remember when they said our players had no heart. When they said we had no spine. Now the times are different, Flamini must have a lionheart. The spine of the team is one of the best in Euroe. Let’s rest him on Tuesday, we are the Arsenal. Imossible is nothing. We shall overcome. COYG

‘Panel-beater’ is a term I heard a commentator use for Flamini.

He is fucking gas. I like how he tried to just hope back up like nothing happened. Honestly guys im fine haha

I genuinely couldn’t believe he went for that ball. Not happy that he was injured in doing so but other teams will learn that he will never pull out of a 50-50. The guy doesn’t give a fuck and it’s exactly what we need alongside Ozil, Cazorla etc. Great to see him back.

From the way he (Flamini) hit the ground it was obvious his lights were out while still up in the air. Yet once he regained consciousness he just wanted to get on with it. The true man of steel. IMO, he has been the solution to one of our major on field issues from last season. There’s no reason why we can’t win the league with this top quality, fluid yet solid, graceful yet hardened team of players led by the best manager in England.

the best manager in the world..subjectively 🙂

I hope he recovers. Concussions are not a joke.

He’ll recover. We (and he) may just have to be patient and accept that he shouldn’t play on Wednesday. It’s up to the doctors, not AW or MF. But we’ll soon have him back, we know how valuable he’s become. I was always a fan of Flamini, but more now than ever.

Flamini is a man on a mission and it will take more than a concussion to sit him out of such an important game.get well soon Flam.

Arsène: “ok, let’s get him off the pitch before he unleashes the dragon. Save this for the WHL”

The doctor is missing since the game!

I hope he returns in time. And I thought he was one yellow card away from a suspension? Wenger should hv let him stay on, foul Tetty, get a yellow and get taken off. Misses Crystal Palace game before chamakh’s neck pops out of fear of the Flame. Comes back for the run out of the ‘big games’

Reports suggest he was seeing 4 Krustys.

A DM like gundogen has so much class and technical ability, but would he threaten to blind a player for persistently fouling jack, or refuse to go off after faceplanting the turf? Flamini is a total arsenal warrior and I am already struggling to think of who could possibly replace him. Only one comes close for the mentality is mascherano, but he’s the same age anyway. maybe just make frimpong his shadow for the next two years?

“He ditched us for more money when he had an amazing partnership with Fabregas. I like him but he’s a mercenary of epic proportions. Well at least he won something.”
“Not exactly free because he will cost 60,000 quid a week for three years. 9.5 million quid whether he plays or not”
“If he is that good, why is he free?”
Three random comments on this site when he signed for us. I was glad
I’m really fucking glad now, he might not sell jerseys but he might just help win titles
We might just win this fucking thing

People were saying at the start of the season we needed to sign a ‘proper’ defensive midfielder and was still moaning we we didn’t have one when Flamini sign. Well he has shown that with with a bit more age and experience he is exactly that. Also people should now accept that Arteta is also a good defensive midfielder too. He has been doing that job well for over a year. If anyone does a job well for a year, they should be accepted as an expert in that role.

You never should have left Mathieu! But I’m glad you are back now!

I heard people say Flamini going out yesterday caused us lack of organization at the back. No doubt he was missed, but I think we shouldn’t forget how efficient Arteta was in the same role during the last running at the end of last season.

Ramsey coming on provided what Flamini couldn’t. I think it’s was just a matter of defining roles after half time yesterday.

As observed by most, we immediately dropped a level when Flamini was taken off. He’s been a brilliant (re)signing @21.175m He gives us the added aggression and bite but also looks to recycle the ball quickly and gets us moving faster. Arteta should be adequate cover but offers a different approach which is a bit more cultured and passing base. …personally I think Flamini is better for us (in general) in the PL where Arteta suits the Cl slightly better with it’s technicality over physical pace. So we should be fine with Arteta playing against Dortmund. I’m also not sure… Read more »