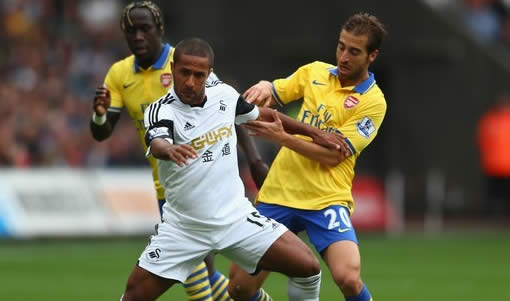 Mathieu Flamini has urged his Arsenal teammates to keep fighting for each other as he hopes for a ‘good surprise’ this season.

The midfielder, who returned to the club after a five-year sojourn in Milan, has earned rave reviews since making his ‘debut’ off the bench against Spurs with the fans and media alike taking to heart his all-action-in-yer-face-what-do-you-mean-ref-touch-jack-and-I-will-blind-you rakishness in the centre of the park.

The Gunners have won every game since Flamini and fellow new boy Mesut Ozil joined the club and reflecting on the tremendous start, the 29-year-old Frenchman told Arsenal Player that he hopes the squad can maintain their momentum.

“I think everyone knew Arsenal have a lot of qualities, but this year we are showing we have the fighting spirit, everyone is helping each other and it makes the difference because of course in a season you have some good periods and some difficult periods.

“What is important is to win game after game, work hard and stay focused and to keep going with our great spirit and then we’ll see. Maybe for us there will be a good surprise this season.”

In the last couple of outings Flamini has been joined by Mikel Arteta in the centre of the park. While the former Everton man has been impressed by what he’s seen this term he’s been quick to play down comparisons with the ‘Invincibles’ of yesteryear.

“I don’t think we are at that level yet, but competition makes everyone work harder so it is a great thing because it raises the level,” the lego and level-headed Spaniard told the Independent.

“If you don’t play well for one or two games, then you can be dropped. We have players to come back like Santi (Cazorla) and Abou Diaby and that’s the way we want it. When it is really tough, everyone is at 100 per cent and that makes a big difference.

“I always said this is the toughest league to win because you have five or six candidates this year to win it.

“It is still very early stages and nobody has really done anything yet but at least we are looking good, very solid, winning the games and we have got a gap to some of the other teams now. In the last few years it has been the opposite, so that is very positive.”

Irrespective of his availability for us, we could never question Diaby’s intent. We need each and every player available to us in our squad

I wouldn’t worry about Diaby taking up slots, at least not this season.

only to go back

I love Abou, what a player he could be. If by some miracle he could come back what an embarrassment of riches we’d have in midfield…

Love Diaby. Its a crying shame how his career got destroyed. I still wish he gets 2-3 years of regular football going forward. Was watching some arsenal 360 episode where they put a few questions to him – so, for a question “when did u feel u have made it” – he says, to be honest, i haven’t made it. And the sadness in his eyes when conceding that, heartbreaking.

One game at a time. COYG

Yes the Falmster went to Italy and what a waste of 5 years. He was French international and bossing the midfield , but lost 5 years of his footballing career for nothing. Thankfully he is back to us and took off where he left and now I am sure The French will call him back. Anther lesson to be learnt for the kids. Look at Hlep and Falm, what happened to them when they left a place they were kings to become just a bunch warmers. Flam lucky to find his way back home, even though after wasting 5 years… Read more »

the ghost of LANS

diaby is my eternal fLANSme.

hmm. that didnt work out like it did in my head.

Double98
Reply to  the ghost of LANS

Thats cos hes a BANGlERs

Flamini has never commanded a transfer fee, all his transfers have been free..

He sees out his contracts, plays for the club that will pay him the most for his services, and works hard every day for his employer. He’s the definition of a professional.

Diaby sadly will never make it at this level. He doesn’t have the footballing intelligence of any of our other midfielders.

Define “make it”, as he’s played for one of the top ten teams in Europe, and is a French international that’s represented them in the World Cup.

It’s not his ‘footballing intelligence’ that is his issue.

Intelligence is SO not the issue with Diaby. Liverpool away(or was it home?) comes to mind.

Can i catch phrase this for the Ozil / Flamini impact…

You win some…
That is all..

Beauty and the beast?

Giroud is Beauty and the Beast all by himself…

Diaby is Bambi
Ozil is Fantasia
The midfield is The Incredibles

It’ll be Diaby’s luck to get fit after all these years and face 5 great players ahead of him!

Think about the backup options to Ramsey. Do we have another box-to-box all-action MF? Jack to some extent, but not really his goalscoring.

the goalscoring for jack will also come… just like it took fabregas a few years, it is just taking some time… but, it WILL come…

Not saying jack won’t score. Just saying that Diaby gives us a mix that is unique in his own way. He also has height right in the middle of the pitch which Jack doesnt. The goals for Jack are a different topic, they may or may not come this season, its still rehabilitation phase, if he can be fine upto Feb, then we may see him add another gear to his play.

Trust me Flamini, If you keep playing the way you’re playing it won’t be a surprise at the end of the season.

I’m scared of all the positivity going on. We have actually done worse than last year when compared to results against the same teans.

Apologies, I cant have all this good play putting a jinx on us, you’ll thank me later, the gods have been appeased

Is that true? If so, thanks for the perspective.

O, you are right! We won each of these 6 fixtures last season. #simmerdown

I don’t think that Edu’s comment (or his Braces) deserve the thumbing down. He’s not trolling or being a naysayer (or even a Fatgooner). He’s pointing out that, despite all the positive vibes and feelgood factor, we haven’t actually done anything yet that we didn’t do last season. (Except sign Mesut Özil, of course.) It’s quite true that the Arsenal won each of the same 6 fixtures last season. Even AW is saying you have to wait until Christmas before judging where we’ve really got to. If someone repeats that a thousand times (like Fatgooner repeats that Arsenal haven’t won… Read more »

Actually as long as we do not require Abou to play 20+ games a season, he is a super player to have around. He can fit in to any of the 3 central midfield roles, and can do a reasonable job in the flanks. Plug and play for a couple of games, as and when required. Just like Rosicky.
These are super players to have around.

The Arsenal Gunners ARE ‘The Musketeers’ of varied Nationalities led by none other then Monsieur Wenger!
They have that spirited call of The Musketeers …..

“ONE FOR ALL AND ALL FOR ONE”

I’m really not overly concerned about what they say off it. It’s how they interact on it that matters; and these guys really are putting in a shift for each other right now. Long may that continue. Remember Denilson “chasing back” Rooney in the champions league? Different worlds.

Arsenal have had many good players over the years but we sure was missing the personality character like Flamini that the likes of Vieira and Keown used to bring to the team. That extra bit of grit and fighting spirit to get through the tough games.

We have a good depth in our midfield. And surpringly in our defense I think with every body fit. We only need depth in our attacking. Suarez or Demba Ba will be awesome.

Stop going on about Suarez and Ba. That’s history. Not gonna happen.

I stil hope, though, that we may unearth a striker come January (perhaps, if we’re lucky, one that’s not cup-tied for the CL). Till then, let’s just get on with it and stop speculating.

Arsenal have more than 5 Star Generals in midfield! That’s awesome!! …… and games will be won from this ELITE BAND OF MUSKETEERS!

Diaby will one day separate with his girlfriend (the club doctor)
and unlike Van Persie he won’t betray us.he will repay the patiency and the support we have given him

Diaby is human, and like others before him, he will thank Arsene for everything, say he’ll always be a gunner, but that at this stage of his career, ( INSERT OPPORTUNITY HERE) will only present itself once.

Abou Diaby is the truth!!!……he must be the unluckiest player in our history, his natural ability is frightening…..the trouble with Abou is he needs five or six games to get into the rhythm of the game and team, during which time he tends to hold on to the ball too long, Like Rambo used to, but when he’s up and running, he’s absolutely magnifincent!!…Yaya Toure and Vieira rolled into one…the only one who is close to him when he’s on top form is Paul Pogba of Juve…( hahahaha Man U)…….Trust me, If Abou eve gets a hold of that Horse… Read more »

Typical performance by Flamini against Napoli…I loved how his pressure and interception led to the second goal
COYG!

Typical performance by Flamini against Napoli…I loved how his pressure and interception led to the second goal
COYG!

Arse in my DNA

Diaby to me is no doubt a solid brilliant midfielder who is unfortunate to always getting injured when he’s almost @ his optimal level. If he can get a good whole season without injury, trust me he’ll be in d same same class wit CazOzil.

Michael Owen: “Arsenal are not a top 4 team.”

Last night, due to boredom, I was watching the Clare Balding show on BT Sport and Michael Owen was a guest.

This muppet can’t even fricking count to 4 which must be the reason behind his ridiculous statement about Arsenal FC last week.