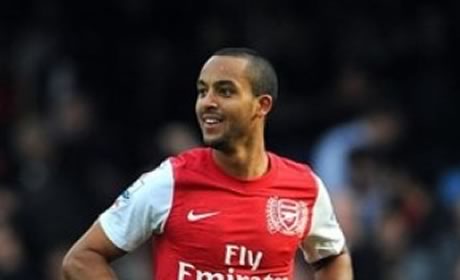 Theo Walcott faces another couple of weeks on the sidelines after suffering a set-back in his recovery from an abdominal muscle strain.

The winger was back in training but according to reports had a reaction to the injury while jogging on Thursday.

“He had to stop, to jog again,” said Arsene Wenger. “He is at least two weeks away now.”

The Walcott news is tempered by the return of Santi Cazorla and the 60 minutes he got against Norwich should see him rebuild some of his preternatural sharpness.

“Giroud is amazing because he develops well,” he said. “If you compare his technical level when he arrived to how it is today, he has highly improved. Now he enjoys combining much more.

“From a player who was just thinking ‘I have to score’, he has become a real team player.

“Nobody came in, so you know at the start of the season that at least you get the chance to show how good you are.

“I always thought that his second season would be the decisive one. We have seen that many times – to adapt to the kind of game we play takes time. I was not too worried when we didn’t bring anyone in because I thought he had a chance to develop.”

Damn…These two weeks are going to be busy for us.
Get well soon, Theo.

This walcott news is atleast 3 days old i presume. It is true Giroud has improved technically, the bloke couldn’t do anything with his feet but now the flicks ons, knocks downs, interplay it’s all coming together and looks a good bet for 20+ goals. for the simple reason he has wilshere, ozil, cazorla, ramsey playing behind him add on a few long range strikes for himself and headed corner goals he is due 25. Bendtner will do a 10 and dont get me started on Welsh jesus.

Let him get healed fast. I want to see all our injured players back and fit.

He’s not injured.Wenger saving him up for the man-u game to tear that ‘tramp’ called evra to shreds!!hehehe!!

He must have learned how to count to at least 4 after being with us for so many of those years (not playing in them all of course)!

But good to be on top of that fickle glory hunting Skuntk all the same. Bring ’em on say.

The setback gods have taken over from the injury ones it seems.

But would have loved if he were with the team now, playing at this amazing tempo

Get well soon Theo. Ur electrifying pace gives us another dimension in attack.

Man, I feel for Theo… He must really be raring to get on the end of Ozils through balls….

@arseblognews @arseblog With the new found depth and confidence we shouldn’t worry too much! Ozil buy was not just good because he is among the top 5 best footballers in the world right now, but also because it highlights where we wanna go and has brought out the best in our squad. Ramsey, heck I admit I couldn’t see this coming, Wenger you Wizard! Keep calm……

Gunner in Ghana
Reply to  rayafc

Speedy could have been a worry for Schmelzer but I am still anticipating for his comeback though. I wish him ‘total’ recovery.

Im trying my hardest to keep calm and keep telling myself its just 8 games……but i honestly cant see us falling to bits. Of course we’ll drop points, lose a few games. But the football were playing wont change. As long as us fans stick with them, through thick and thin..im a believer we can win this league. COYG

Get well soon Theo.
Hopefully we’ll have Podolski back around that time too.

a shame really, it would be really nice to have a pacy outlet at least on the bench which effectively gives the oppositiion fullback second thoughts on attacking often. Then again, we do have Özil.

I doubt Theo is that worried, the guy has scored one goal and ran around like a headless chicken for 85 minutes…he’s Lennon with a slightly better haircut.

Silverstre for the Ballon d'OR

I was looking forward to his return, and in a way, I still am as it will give us strength in depth. However, when you watch Saturday’s goals, especially the first one, you wonder if we’d have scored had Theo been involved in the build-up… I know his technique has improved (a lot) but it’s not up to the very high standard that this team is establishing.

When you look at how everyone else in the team has come on since the game against Villa, and responded to the signings of Özil and Flamini, it’s be surprising if there isn’t a similar response from Theo. He must be desperate to get into a team that’s playing like we did for periods against Norwich.

If he can build on his technique and vision the way Jack and Aaron have done, and add that to his speed and his finishing, I believe the sky’s the limit for our Theo.

Doubt Theo will step right into the starting lineup. He’d be a fantastic 70 min sub, but at this point, I’d like for us to stick with this winning formula. Lets not get too cute…

with the passes that ozil offers was really looking forward to theos return.all we can do is wish him a quick recovery

badluck for theo but is Gnabry is our champions league squad? He seems ready to make stuff happen on the right. Maybe as a sub in secondhalf to run at tired legs he’s pretty quick so should pose problems for the German’s high back line. COYG