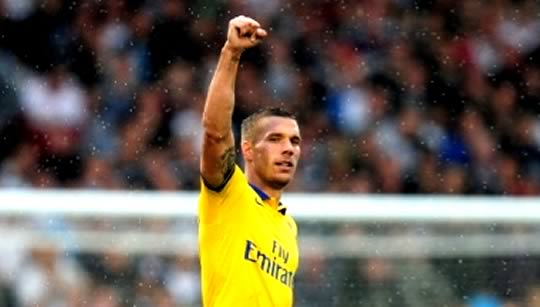 Arsene Wenger believes Lukas Podolski has it within himself to further develop his game so long as he puts in the necessary effort.

Quizzed on his trio of German first team stars ahead of the visit of Borussia Dortmund, the boss claimed Mesut Ozil was ‘born a world class footballer’, labelled Per Mertesacker ‘one of the best defenders in the world,’ but called on Podolski to deliver more.

Speaking about the German attacker, who has been sidelined since August with a hamstring problem, Wenger told ZDFSport.de:

“Lukas Podolski is super talented, he can play very well with others, has great power, can take free kicks and scores goals from anywhere, but he can develop and become better.

“You always have the feeling that he is 80, 90 percent there, but you want him to give 100 per cent and then he’ll be world class. There’s more to come from him.”

Not expected to return to first team action until the end of November, Podolski, who was linked with a move to Schalke in last summer, won’t find it easy regaining his place in the Arsenal or Germany starting line-ups given the numerous attacking midfield options at the disposal of both Arsene Wenger and Joachim Loew.

With a World Cup on the horizon and close mate Ozil to play alongside the 28-year-old certainly shouldn’t be lacking the necessary motivation to up his game. Fingers crossed Wenger’s words work some magic…

One gets the feeling Poldi will hear of this and think “Ah hah!”

God knows what happens when Theo finally finds that latent potential we all know he has, too.

Anyone else get a feeling good times are on the way?

rad
Reply to  the only sam is nelson

Theo is doing all right already.

He is, but he can do much much better, he’s an extremely talented lad. As for Poldi, I’m sure he’ll get chances to play down the middle as a striker and prove his worth as well as offering both (primarily) Olivier and Theo some competition.

Scoring-wise, Theo is (this season) definitely not doing all right. The same goes for e.g. dribbling, but I can’t judge how much potential he has there really.

Hmmmm….anyone else get the impression Wenger’s far from impressed with Podolski’s output. Sounds like a challenge to me which is so refreshing as we actually have options now so players have no other choice but to step up!! Feels good to be a gooner at the moment, long MAY it continue 🙂

Subte but drives the point home. Classic Arsene. Over to you Poldi #Aha!

i agree but what i find difficult to understand how exactly wenger wants wants pdolski to improve. i mean, whenever he has played for us, he has rarely disappointed. he puts crosses in, has got assists, has got goals. the only thing that i can think of is the fitness levels. since he has come, he’s been getting injured a bit too often and his stamina levels probbly need to improve. But otherwise, he has played great football, right ??

He’s been decent, but I get exactly what AW is saying here. It always seems as though there’s a lot more in him, and we only see it in flashes.

Agreed. He does also tend to fade off in some matches and thats not acceptable for someone we know can be world class. 85% is prolly right atm but with a good kick up the nuts like this one from Arsene we’re gonna see a podolski! operating at 100% now can somebody give me a C O Y G !!!!

_
Reply to  The 3 Billion Dollar Stan

I don’t agree that it always seems there is more coming from him – e.g. in the last match he was perfect and I think he was very, very unlucky to get injured. But I think that’s exactly what AW is saying – so far Poldi is only being consistent in patches.

He produces, definitely, in terms of goals and assists. But its the type of production where he can be invisible for huge stretches of a game, then pop up with an important moment of skill. I think he can be more involved and like you said improve his conditioning and fitness a bit.

Wenger had seen players like Gibbs, Giroud and Ramsey raise their game to another level and now he wants Podolski to follow suit. If he doesn’t then he’ll be left behind. I think the same could be said of Chamberlain as well.

Yeah but don’t forget the lad turned 20 just weeks ago and he had a good pre-season
Chambo’s gonna be a world-beater for us, that’s for sure

Feels like a weird thing for Wenger to say. If Poldi really has been playing with a gammy foot, yet was our go-to guy to get the opening goal, it feels like giving him a public nudge is unnecessary – not least while he’s injured and trying to keep his spirits up, and potentially being courted by other clubs.

I suppose it’s to give Podolski something to think about while he is coming back from injury. It won’t be as simple as walking straight back on to the left or in place of Giroud and he has to work hard for his chance.

mike
Reply to  Si in Galway

notice how giroud improved when we said we need to sign a world class striker? le prof is simply wodering if he can double the bang for his buck by hinting podolski could do the same

I get what Arsene’s saying, but it seems a little bit harsh considering Podolski’s been injured for weeks and won’t be back fully for a few more, plus when he did play early in the season, he looked lethal. What does Arsene expect him to do right now?

Make the step up like Ramsey and Giroud i guess. Giroud and Podolski have both had a season with Arsenal and, while Podolski has been injured, Giroud has been showing the massive improvements he’s made since signing last summer

Always felt the same. Though I still love Lukas

If Poldi does up his game, be sure we will be treated to countless 40-yard rocket shots that will shred nets.
I pity keepers.
What says you Poldi…

He’s probably worth his salary just to entertain the rest of the squad.

Arsene knows when to coddle and when to cajole. Strikes me that Podolski might be such a happy soul he could lack a tiny bit of hunger. No denying his talent, and he was along with Walcott our most effective player in terms of goals and assists last season, but certainly he is not the fittest player.

prob to do with his fitness, as was seen last season when he hardly did the full 90. he does seem to drift in and out of games but with his striking ability only needs a few seconds to make an impact.

Wenger’s words speaks volume. it’s an indirect message to Podolski that a starting role in the team has to be earned by the quality of his game and team production. Because, on current form, it will be hard for any returning injured player to stake a claim for starting position like the current bench players are have found it hard to do. Podolski, when he comes back, should not rock the boat by asking for a transfer in January. But hunker down in true grit fashion and fight for a spot.

Don’t forget he’s been deployed out of his natural position by Wenger as well.

no he hasn’t, not really, his natural position is the left wing, I’m going to charitably assume there’s a reference in sarcastic tones to Arshavin being out of position and hold of thumb downing you

Unecessary from Wenger. In Poldi’s last appearance for us, he scored a brilliant brace to win us the 3 points at Fulham.

So says Danny, FIFA Manager of the Year.

I always watched Poldi his form in the 2006 was frightening if he finds that form again it will be absolutely frightening!

I know where Wenger’s coming from, with 2,000 caps for Germany you’d expect slightly more, only slightly more mind. In some games he’s phenomenal. And his tracking back is great for someone who likes to play through the middle.

It’s a good sign that Wenger has said this, I think. With our current success there’s competition and a bit of extra drive for some players will see them go very far.

Can any of us truly say that Lucas has been as good as he can be for us ? Flashes of brilliance yes but inconsistent.
I am pleased that Arsene has touched on this and hopefully Podolski will react and push himself to achieve 100% fitness and really help us maintain our position during the months to come.

still if he is back for the cc vs chelski then be a great game to prove a point, could be a strong line up that night

With such competition for places in midfield, Poldi is just as likely to be used as a back up to Giroud either from the bench or in the less important matches.

If so, he really will need to step up his game from last season as he failed to have much of an impact when played up front.

Just show him the picture of michael ballack or make the whole opposition look like Ballack ah then you will see the extra 15 or 20 % from him.

Wenger knows that podolski is a really good footballer and if he works harder and get fitter he can be fucken excellent.

just hoping that Poldi will see this in a positive way and improve his performance. He’s decent now but although i LOVE Poldi, i’m gonna have to agree with Wenger, he does need to improve because once he played 100% he’s a WORLD CLASS. 🙂

With the way the midfield is now set up I can’t help but feel that Poldi will be used as an understudy to Giroud. I don’t think he’s the sort of winger to rotate with the other midfielders in the way that Santi does when he’s played out wide.

Ferguson told RVP he would be staying at United. Brilliant.