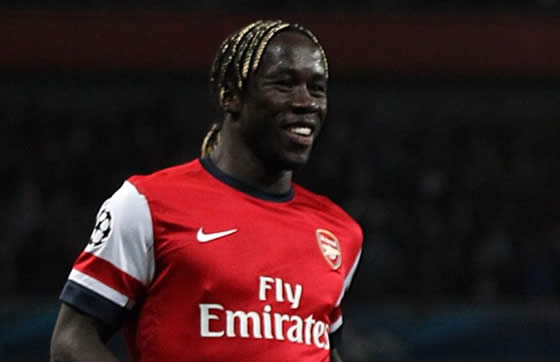 Arsene Wenger has confirmed that Bacary Sagna will miss the trip to West Brom this weekend with a hamstring strain.

The Frenchman’s injury is unfortunate but with an Interlull taking up the two weeks after the visit to the Hawthorns it gives him time to recover before we head into a very busy period.

“Sagna will not be fit,” said the manager. “He has a hamstring injury and will be out for 3 weeks. Its always a blow because he Sagna is a complete defender. For us it is a handicap but Jenkinson is growing as well as a player.”

Carl Jenkinson will replace Sagna on Sunday. Other than that there are no reports of any other casualties since the Napoli game, so there are options for Wenger in a number of positions.

The boss is mindful of a West Brom side which beat Manchester United last weekend, saying, “West Brom will be a difficult test, they have a massive squad with experienced players.”

This is good news, Jenks gets a game and Sagna doesn’t go to France for the international break.

It’s good as long as Sagna comes back for the Dortmund fixture.

Nelwanda, you can’t be serious. I could see the sense of you think this is good news if he was going to be back right after the interlull, but 3 weeks out will see him miss 2 league games and could see him short for the Dortmund game

Fergie the Gooner
Reply to  TomJ

I’m hoping he means that it’s not good he’s picked up the injury, but that it’s only a short one (hopefully, but I should now better by now!), we’re fairly well equipped to deal with it and that the timing could be a lot worse.

I doubt the injury is all that serious, rather I’d reckon that Monsieur Wenger is exploiting the timing of the injury to give one of his players a substantial rest much like he seems to be doing with Cazorla.

Yeah, it’s amazing how many injuries are just bad enough to see off the Interlull nowadays. Glad we are finally getting in on the act.

I think he means it could have happened at a worse time. If he;s back by Dortmund that would be super.

A telling description of Jenkinson there. Let’s hope it is 3 weeks and no longer.

3-1 to arsenal
Reply to  NorthernGoon

it could be our usual “3 weeks” that is synonyms with “indefinitely” or it could really be a minor injury but the boss just wanted to put any temptation of Deschamps to call up sagna to rest. Am hopeful it would be the latter.

Jenkinson is a capable replacement 3-1 to the gunners!!!

Or even another clean sheet? Be good for Szczesny, he covets the clean sheet…

This is a blow. We lose a player who can play 2 positions. But hopefully this is a chance for jenkinson to show how good he is in the very action packed 3 weeks coming up.

Everyone is now selecting players body parts since Henry’s right foot turned up. Someone has to be a trailblazer.

It is Per Mertesacker, do you even read the sacred text that is Arseblog?

It’s almost as if he isn’t reading.

A clause in Sagna’s new deal: A 2-3 week hamstring injury before every Interlull.

Sagna is a loyal man. Just look at his hair. He is a loyal servant of that hairstyle.

Am i the only gooner worried about Sagna’s contract situation?
He could sign a pre-contract agreement with another team come January.

Common Arsene, give him a new 3 yr deal.

Are you the only one that thinks the club aren’t aware of that and that they’re sitting playing crosswords?

honestly who knows, esp. after the last few years. but yes, i’m hopeful they’re working hard on it.

Are people thumbing this down because they think afolabi ademakinwa is taking the piss, or because they don’t like Yaya Sanogo. Why bother at all? I hope the lad is back soon too. Injured players can’t improve their game.

The period after the international break awaits us

The gods of midfield await us

Is that Ignacio Abated breath? What is that like?

Our Midfield is just extraordinary.

Jenkinson did it in the capital one cup so no problems

And yet again gibbs left out england squad. Surely after the qualifiers are complete, hes got to be given a chance?

I am not too fussed about it, Gibbs will get some rest during the two weeks along with some of our other players who do not play regular international football.

Have absolutely no problem with him not getting picked for England. Baines and Cole are better, sorry but they are. But most importantly Gibbs gets the chance to rest and stay injury free.

I am also more than happy for Gibbs to get some rest. I think his current form is outstanding but with no proper left midfielder or winger in front of him he must be tired.

Not a popular opinion clearly but Gibbs is as the 3rd best LB in England right now. I’m certain that he’d have been number 1 choice by now if he had not spent so much time injured.

Gibbs & Baines should be ahead of Cole.

I have watched a lot of Chelsea games where he simply gives up when beaten.

I think you’re right with Baines but it’s simply down to experience, like you said injury has held him back. By the end of this season I expect it to be different but then we also have to consider that Hodgson is a bit crap.

Cole better than Gibbs though? Once upon a time yes, now not so much. That’s not bias either as I’ve always rated Cole even though he is a spineless douche I just think he’s past his prime.

Despite being English, England can fuck off. I’d rather none of our players were involved in that waste of time right now

Promising Poet, seems like you forgot about Ox. Why do people keep forgetting about Ox?

When is Ox coming back? 🙁

Bacary Sagna please have a nice rest during the international break, and come back with a vengeance and stick your boot in Lewandoski’s arse on 22nd October. There is no pressure on you to show up for France next week.

Unlike Santi Cazorla for Spain, you will NOT face any competition to get chosen for the French national team in Brazil next year because the other France rightback Matthew Debussy at Newcastle is utter rubbish.

This little injury is a necessary evil cos he’ll not be taking part in the interlull. He’ll come back strong and fresh after the interlull when our fixtures would be tough. Jekinson is going to provide a good cover until we have Sagna back. Santi, Sagna, and maybe Theo would be back after the interlull which would be another boost for the team. COYG, please demolish Westbrom and keep matching on.

This is going to be very interesting. For me, Jenkinson still has to prove that he is an Arsenal-quality full-back. Since he came to the club he has made huge improvements and at time has looked real quality. But he has also had a few stinkers. Now he has the chance to prove that he can be Sagna’s permanent replacement.

By the way: why is The Sun getting so worked up about Jack having a fag? They were just talking about a cigarette – right?

Bang on about Jenks, his crossing is pinpoint but unfortunately at times he has left us scratching our heads with his defending. I genuinely think its more to do with lack of game time than anything else though hopefully that’ll change with our road to winning one of the cups.

Shiiiiiit. I wonder if Hector Bellerin will make the squad now then…

With the amount of injury we have, it wouldn’t surprise me. If Carl were to get injured as well I think he might opt for Flamini at RB though.

Ahh good shout, I forgot Flamini could play there. I reckon opposition wingers would shit themselves if they saw they were facing his tackles all game!

Jenko played against Brom last week and was our best player on the pitch. Telling that this doesnt worry me in the least. 🙂

But I do love Bac and hope bes back asap. Top man.

I think Bellerin does deserve a chance at back-up but I think TV5 would be used at CB and Kos pushed to RB if Jenks had a problem.

Joel Campbell is an embarrassment to the crest. I don’t know if i can post links here but his stop-drop-roll simulation against the USA is just inexcusable.

I doubt he ever plays for us.

The USA player does stamp on his foot but its clearly unintentional….although by his reaction, Joel obviously doesn’t think it was.
But an “embarrassment to the crest”? Not really mate.

Fact: Bayern Munich have scored in 72 of their last 73 games. Only Arsenal have stopped them from scoring.

Give him a good rest.

Give Jenkinson a good run out. He could do with the games. Play Ramsey in front of him or Jack.

Hope to see Bellerin feature more this season in the league cup at least.

Sagna should have a contract extension until forever simply because of this http://www.youtube.com/watch?v=cv83zbbVd4E

that, my dear gooner friends, is what you call loyalty

Jenkinson will be fine for West Brom and against Norwich but I don’t think he is ready for Dortmund yet. This is a good opportunity for him though. He had a period last season when Sagna was injured in which he showed he could play regularly for Arsenal. I hope his improvement has continued. I want Sagna to get a 3 year deal. He can still play fullback for the rest of this season and continue to mentor Jenks before giving up the starting berth to him sometime next season. Then he can he can play the rest of his… Read more »