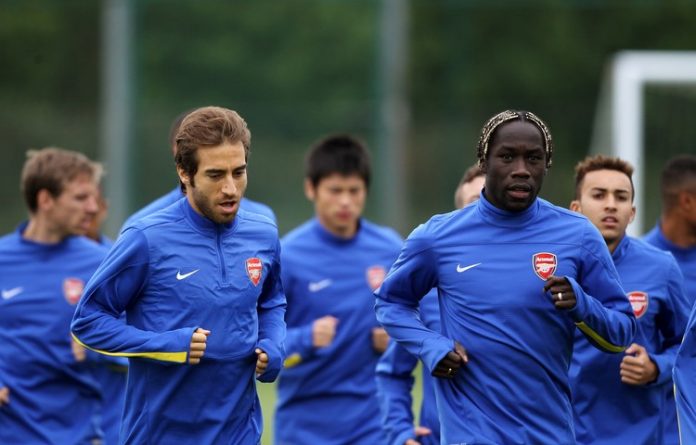 Arsene Wenger has revealed that Bacary Sagna (new deal please) is a slight doubt for Sunday’s trip to West Bromwich Albion but that aside from the right-back there are no new injury worries.

Speaking to Arsenal Player the boss revealed:  “The only uncertainty we have could be Bacary Sagna who had a little hamstring problem. He has a scan today [Thursday] and from then on we will assess his situation.”

“Everybody else came out of the Napoli game without a major problem so they should all be available.”

Despite being out of his protective boot having suffered an ankle injury three weeks ago Arsenal fans will have to wait a little longer for the return of Santi Cazorla. The little Spaniard had hoped he’d be in contention for a place before the international break only for the boss to scupper any such idea.

“He is not in contention,” continued Wenger. “But he could be not far after the international break.”

Hopefully after the West Brom game he’ll tell us all the players have knocks, and will “unfortunately” miss the International break. They could all do with a rest, some stern tests coming up soon. Nothing we can’t handle though!

I think hes deliberately protecting cazorla form this intl break. Cazorla will really be needed after the break, and any injury to him in this break will severely hamper arsenal’s strength. His season really hasnt started yet.

it sounds good as a joke, but at this level, where everything is scrutinised thoroughly, he cab’t risk lying to the world…

It’s less of a risk to lie than to play Santi jetlagged, hungover and barely fit in a friendly in Kamchatka! Give him the rest he deserves!

This Harsh guy is starting to annoy me with his stupid quotes and glasses!

Me too Monk, but clever stuff from Arsene slowing his comeback

A pattern has emerged: player has fantastic game, player has injury. If Jenks steps in, I’m pretty sure he will get the job done.
I can’t bear this eternal wait to see Santi and Ozil rip teams apart.

Cazözil seemed more apt, Cazorla is the senior player in this Arsenal team. 😀

Brilliant Decision to keep santi out. i could imagine Del bosque just waiting, sniffing almost at the slightest opportunity to whisk him away for a trip around the globe. in which he may or may not significantly feature however theres always a 10 minute sub appearance period for him to get clattered by a south american nutcase breaking gooners hearts all over the world….

Santi needed a rest anyway. The guy has played non stop since 2011. I can’t wait to see Cazorla Özil and Walcott combining. I’m also pissed at Chamberlain’s injury. He was looking great in the Villa game and this was supposed to be his breakthrough year. And Özil and Poldi link up very well for Germany, it’s gonna be very very exciting when they are all fit.

Who’s the player to the right of Sagna in the picture?

the only sam is nelson
Reply to  Joe

is that one of the arsenal gent’s nicknames?

Ormonde-Ottewill…academy left back I think….

Theo in a wig. It’s how we’re now going to get around sending our players to international games

I think Sagna could play our next match. Wish Carzola quick recovery.

Heyyyy Arseblog, how about a small, but very useful change to the comments section?

Order comments by their thumbs-up rating, instead of chronologically.

That way, no more first posts, and we won’t have to trawl through a bunch of waffle to get to the insight!

Give it some thought. 🙂

But the thumbed down comments give me the most joy.

Then nobody would read yours

It’s a shame the majority of the injured couldn’t come back for November, when the big games really hit us. Either way, Cazorla and Sagna’s jot so much more long term (as well as maybe Walcott?) is still sweet music.

am sure they will be back soon with a high impact

My thought is Santi has been fine but the boss wants Spaincelona leaves him a little space to breath.

Silhouette of the back of a grand chair, we can make out the outline of Wenger. Close up of a hand stroking a cat, lighting strikes outside window, unnecessarily long evil laughter, fade to black.

what setup would you like to see with Cazorla and Ozil both in the team?

Cazorla out on the left where Jacks been playing recently, Ozil in the free role in the middle

And Jack…?
I think you are right but it leaves 2 spots for Flamini, Arteta, Rosicky, Jack, Ramsey and Diaby, assuming we can’t play one of them on the right because we will put Theo, Ox, or Gnabry there. And we’ve left Podolski on the bench as well. Suddenly (compared to the Villa match which was just 45 days ago or so) things look totally different.

It barely matters. Stick them in the front three and tell them to rotate. Jack, Santi, Rambo, Tomas, Mesut… take your pick. They’re all clever enough players to do it.

HOLY FUCK THIS IS EXCITING!

If it were up to me, I wouldn’t play Sagna if there was any doubt at all over his fitness, we are starting to feel less uptight about our depth in all but striker position, lets keep it that way and not risk aggravating an injury to our put him anywhere defender. Jenks on the right will be fine especially if Gnabry is warned to remember his tracking duties. plus it’d mean more game time for Gnabry which nobody can think wont help. all in all not a biggy buisness as usual 3-1 if you please (sorry szczesney) 2-0 …what?… Read more »

Also don’t forget that we have Rosicky back!

Gooner of Navarone
Reply to  mike

I think I prefer Rosicky doing winger duty when until Walcott’s back. Gnabry can be a 65th min sub.

Remember how Good Santi was last season???? Imagine him trying to impress Arsenal’s record signing. Am sure he will, as footballers are competitors and Santi definitely is. I remember that game at OT last season when we were absolute shite Santi showed sheer determination and character until last sec.

But [if Arsene is saying Cazorla is not fit to protect him ] it doesnt make sense. Cazorla could use the international games to get back to fitness. Any player coming back from injury needs 2-3 games ot get up to speed.

let him get the “2-3” games in an arsenal shirt my friend!

3-5-2. Not for every game, just some…width from our wing backs, extra defensive cover from Verm, closer interchanges and combos in midfield, and the pace and finishing of Theo to run onto HFB’s delicious flicks etc………

1. ‘Van Halen’ would have to play on the left side
2. What happens when one of the centre backs inevitable get injured
3. Why drop Flamini, he has been crucial to our freedom in attack of late
4. Ozil and Cazorla would have too much defending duty in that formation

For fucks sake, it seems like there’s an international break every other day

You’re not the only one pissed with this Harsh cunt…. Probably a spurs shit trolling cunt…

Unlike Harsh, I’ve never seen you make a positive contribution.

How about checking out who this Harsh cunt is? Starting to annoy the fuck out of us mate!

Who The Cap Fits.

Bob Marley has risen from the grave

Dedicated to johnnnycakes (see above).

I’m fine with sitting Sagna and Santi Clause until after the break. Speaking of Sagna, his wife is mighty hot. Google that shit.

Did no-one else first read that as ‘Wenger gives up on Sagna and Santi’ and have a panic attack?

Not that I’m superstitious or anything but if I recall, the last time the phrase New Deal Please was used in these parts it did not work out. I so hope that Sagna sticks around

Did any of you see the pre Napoli press conference? When sagna and Arsene were asked about a new contract, they looked at each other, laughed and said “maybe today is not the best day to talk about that?”

Whats our record for consecutive wins? Wemust be getting close.

I think its twelve. Not a hundred percent though

Answering my own question we made 14 consecutive wins in 87 not sure if WBA counts as we won on penalties but if it does I think if things progress we get 15th win against Chelsea in carling cup. Cheers Mr Wenger our faith is back.

Too many comments every time. Some are definitely not worth reading u kno