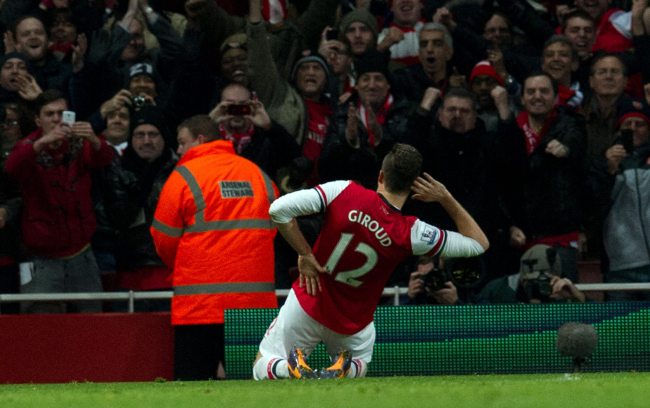 What this looks like graphically compared to the Invincibles:

*Southampton bombed the ball in a lot and Arsenal dealt with it at an unusually high rate, especially the aerial duels.

Bottom graphic is broken but could just be for me?

Thank you so much for that unbiased comment Doctor, I wholeheartedly agree

Great win for us. Özil played very well today and its great to see Theo back in action.
Also , did anyone think the Monreal was great playing as a winger? I did

Fantastic win, and another great by the numbers, Thank you! Always look forward to these. Those aerial numbers are insane by the way, holy sweet Jesus. We have to re sign Sagna! Love the Giroud chart too. I would like to see more from Monreal, feel like his performances deserve a couple of starts, maybe give Gibbs a rest for the Hull match? Glad to see Walcott back in action, loved the few long balls attempted by Ozil towards Walcott and Giroud near the end of the game. I’m sure we will be seeing more of those to help finish… Read more »

Wasn’t meant to be a reply, but we touched on similar points about Ozil, Walcott and Monreal, so kind of fitting.

I don’t think it’s fair to brand Southampton as Stoke. They play much more attractive football than those c**** but I can see where you’re coming from. I thought Santi looked great today even though he’s still finding his form. Really pushed forward with intent. Can’t wait to see him at his best linking up with the others.

Why did Arteta go off? was he wait for it…….tired?

He seem a bit off compare to last few years. Perhaps age is catching up on him ( Roisky and Arteta are the only two aging players at the team but they can still provide years of service) or he got overshadowed by others. May be it is just not his year. We all know performance can go up and down. He’s still doing a fine job anyway and we don’t yell ” he is crap, fire him” because of a small dip in performance”. Arteta and BFG are the two providing leadership to this team.

How many of those corners did we deal with effortlessly? And yet some dumb pundit will still say “arsenal look suspect on corners” or “arsenal’s zonal marking is blah blah blah..”

I know. It’s so annoying. We defend hundreds of crosses and set-pieces brilliantly, then when we eventually concede one everyone goes “Ah it’s the zonal marking”. What about all the times zonal marking worked perfectly!? What a load of shit!

“The attacking players get a good run at it”. Every. Single. Time.

I believe we have only conceded one goal from a set piece this season. If it wasn’t for that bloody zonal marking it could have been zero!

Let’s face it. All systems concede goals. Its a matter of how many. Besides man marking relies on the man putting up a good 1VS1 performance and zonal marking relies on the player defending his area. Arsenal have good players. The players are in good form and they get used to the system. Therefore it works. At the beginning of the season, I still get nervous whenever I see high balss flying in. Now I just sit back. btw, that goal conceded was from BFG resting in his sick bed. Much higher chance of it clearing if he was around.… Read more »

My arsenal sheets are clean,

Will be shouting at my tv in a few minutes because alan hansen is going to say some stupid reason why arsenal wont win the league.fuck you in advance hansen

Hansen is a fuckwit

Can’t wait to see the match in full tomorrow. Until then, I’m just reveling in another high quality win against high quality opposition. A lot of chips fell our way today with Lovren missing, Boruc deciding to get high just before kickoff, and Lallana playing with a knock from his international exploits. Still, I’m hearing Arteta played him as well as anyone so far this season though, so kudos to Mikel for that. Those numbers for aerial duels are unbelievable. I might even venture into “unheard of” territory on that one. Wow! The lack of incisiveness is a bit of… Read more »

Ok I watched the whole match and I honestly felt Arsenal’s performance wasn’t as convincing as it should be. The passing wasn’t as silky as before, talents like Ozil and Ramsey were actually under-performing, and Cazorla was worse off.

I have to admit Southampton kept firing in long balls and broke Arsenal’s passing tempo where Arsenal’s possession was at times 10% lower than that of Southampton. One thing that really deserved praise was Arsenal’s defence. Really solid, with Giroud coming in as back up. The best defence imo should not go to Southampton but Arsenal

NW
Reply to  In all honesty

Few would doubt that Giroud + Back 4 did a better job than the other 5 in that game. In fact its been the case for a while. The midfield should have defeated Man U but that did not happen. Either they still need to work out how to best play tactically or teams start to cope with this need group of players after watching the first few games. They broke a few and lead the EPL so everyone try to find ways to stop them. Perhaps they are a bit tired. Ozil, Ramsey, Cazorla, Wilshere, Roisky(+ARteta) thats 5.5 players… Read more »

Sack Hansen and have Keown instead.

He was awesome on 5 live today.

That’s all the statistics you need.

Isn’t it your policy to either say Fuck in full or not say at all, none of that asterisk crap?

Surely what boruc tried should be counted here

journeyman
Reply to  Away fan

Jo
Reply to  Away fan

I was coming to write the same thing – how is that not an attempted and failed dribble?

Giroud’s picture: What did you say Hansen? Bitch pleeeeease!

Is it me or has monreal looked impressive coming off the bench? Always the busiest player when he comes on and puts in a right old shift. I think some rotation is in order. We could rotate without the quality in our team deminishing. Now those are words that hasnt been spoken related to Arsenal for a long time. 😀

Actually make that 2, even the penalty was gifted by them..

Yet somehow, officially, Mertesacker got the assist!

0 – Goals conceded by The Arsenal.
“Something Nil to The Arsenal”, I’ll take that every time.

Emir of Emirates
Reply to  Pearson

I for one think Wanyama is quite a player. I’d love to have him as DM.

You saw him playing against Arsenal. If he was doing what he did, while playing for us, the refs wudve taken him down much earlier.

Good player but got away with WAY too much

Good result against a decent team. I get angered down the pub on a weekly basis by fans of other teams who think Per is a pile of shit and a liability ! I think the guy is the best CB in the premier League and has been over the last 8 months. I wonder if these clowns will be saying the same thing come May when he’s got a premier league medal wrapped round his neck ! Worse thing about these clowns is they are mostly Mugsmashers who decided that they could follow both Swansea and Liverpool when the… Read more »

Good result against a decent team. I get angered down the pub on a weekly basis by fans of other teams who think Per is a pile of shit and a liability ! I think the guy is the best CB in the premier League and has been over the last 8 months. I wonder if these clowns will be saying the same thing come May when he’s got a premier league medal wrapped round his neck ! Worse thing about these clowns is they are mostly Mugsmashers who decided that they could follow both Swansea and Liverpool when the… Read more »

This season’s title race should be called, “The tortoise Verses the Hares.” We are plodding along nicely, winning the matches that we should do, albeit usually in unspectacular fashion. Meanwhile the two better sides than us, City and Chelsea, are often playing superior football, but both have a nasty habit of slipping up against weaker opposition, especially away from home. So the question is: will we win the League by continuing to grind out victories and relying on the dodgy results of the two sides in blue? Or will City and/or Chelsea put together a spectacular run later in the… Read more »

Where did the Giroud goal celebration image come from, Arseblog? Only I’m in it.

I am getting way too much enjoyment from watching man city thrash sp*rs right now. 4-0 hahahahahah

4 Points gap over Chelsea and Liverpool.

That’s all the statistics we need this weekend!!!;)

How many offsides were there against Arsenal? It does worry me, especially now that Theo’s back.