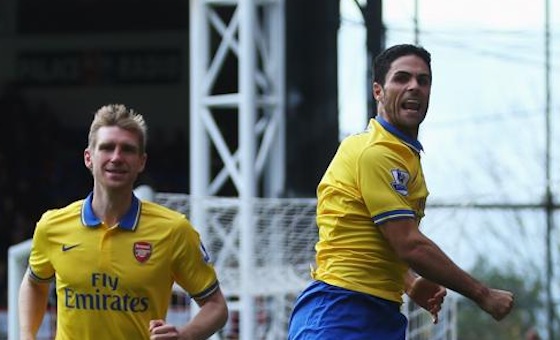 Arsenal will have Mikel Arteta available for tomorrow’s Champions League clash with Marseille.

The Spaniard was substituted during the 2-0 win over Southampton at the weekend, sparking fears he could miss the crunch European encounter, but at his press conference today the Arsenal manager revealed there were no new injury worries.

Although Lukas Podolski was in training with the squad today he’s still a few weeks away from consideration, but Wenger welcomes back Mathieu Flamini who missed the weekend’s fixture through suspension.

The boss is aware that it’s a big game for his team, saying, “We know what’s at stake and want to qualify. Tomorrow is a big game in that stage.”

Thierry Henry and Robert Pires also joined in the training session this morning, and said of the club’s all-time leading scorer, said “At the moment he is invited just to practice when he can and when he wants.”

Arteta on the performance, scoring late and Lacazette’s injury

Arteta: No excuses, Pepe has everything he needs to succeed

Really Bizzare that Arteta went off on saturday. he must have felt one hair clip out of its follicle….

Glad he’s back, with flamini, walcott and to some extent poldi waiting on the wings wenger is about to have the biggest selection dillema he could remember…a good thing though!

Would start Rosicky tomo, and bring Theo on from the bench!

Glad that Arteta is fine. A rather important cog in this Arsenal winning machine. Someone the younger lads can look up to as a role model. Top top top Captain.

Titi Henry, he trains when he wants!

wow, arsene can tease the media all right. “at the moment”

I imagine this is a language issue: in his mind he was probably thinking “a ce moment…” which directly translates as “At the moment…” but can also be used more generally to mean “These days..” etc.

On the other hand, he could just be a massive tease.

Because he isn’t fit and has been out since August

Good to see some old hands about the squad ready to offer advice to the younger and not so young players. They have been there seen it and won it..

So with Santi and Theo on the wings, we have to choose two of Jack, Arteta, Flamini and Ramsey to play in the two midfield roles…If that’s not depth, I don’t know what depth is.

totnum squad, that is depth

So glad your better, Mr Arteta

im actually getting used to the good vibes surrounding our club this last few months!
I could get used to this warm feeling,

Can’t help but still feel nervy at times. I know as soon as I’m feeling totally comfortable will be the exact moment Giroud and Mertesacker will get injured.

How much was the fine? And when was the clash?

Podolski still a few weeks away? Lol.. seriously what the hell did happen to his hamstring??

The worst hamstring tear I have ever seen, according to some doctor bloke.

I heard it wasn’t just a hamstring pull. There were torn ligaments or tendons. I don’t know for sure tho… The club hasn’t been very forthcoming with deets on Poldi’s injury. But from the length of time he’s been out we can surmise it was much more than a pulled hammy.

I heard the hamstring was pulled so hard, it pulled his balls down about four inches 🙂

Some good selection headache there with all the midfielders all available barring Diaby and the Ox!!! http://www.kalahari.com/Books/The-Professor_p_32695071;jsessionid=E9FBB0495FBFA25181C37265C4D0E64A?linkId=751046&affiliateId=8812&linkType=ORDER_REFERRAL

Over the weekend I pointed to two old drunks sitting across the bar from us and told my friend “That’s us in 10 years”. he said “That’s a mirror, dip-s**t!”

Anyone else notice the build up play to that Ramsey back flick? Arteta’s rifled in a 40-yard inch-perfect pass and Ozil’s first touch was so good I couldn’t even see how he did it. With his knee I think. That would’ve been a sensational goal if not for that pesky post…

Yeah he didn’t have the best game by his inch perfect standards but he did do some things right.

His distribution from deep is where he may have an edge over Flamini.

I’d like us to go with a Flamini (since he’s had a rest)-Ramsey axis and also start Rosicky at Wilshere’s expense. Cazorla, and Ozil will definitely be starting, so that only Leaves a decision to be made whether Gnabry or Walcott starts on the right. With Walcott’s fitness in mind, I’d go with Gnabry and bring on Theo on in the 60-70th minute.

Rest of the team picks itself:

Ah, what they do is, they all come on in a bunch, and when the ref does his pre-game headcount Cazorla hides behind Mertesacker.

Crap my bad. Poor Gnabry someone’s got to tell him that he’s not making killbots fantasy team.

How about a start for Nachoman today? He has been on the subs bench far too long and Gibbs would need a break sometime soon.