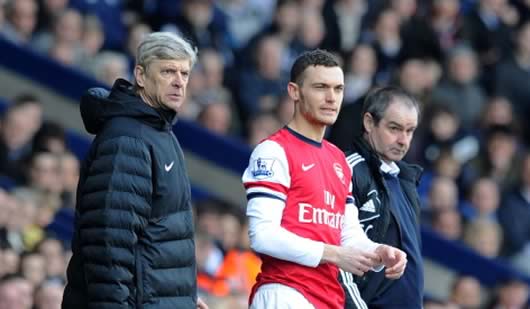 Thomas Vermaelen says he’s not thinking about leaving Arsenal and is focused on winning his place back in the team.

With Per Mertesacker missing due to illness yesterday the club captain started his first Premier League game since April and acquitted himself well despite the 1-0 defeat to Man Utd.

Having played so little speculation about his future is normal, but Vermaelen was keen to play that down knowing there’s still a lot of football left to be played this season.

“I keep on reading stories that I want to leave,” he told the Evening Standard, “but that’s not the case. I’m still focused on the team at the moment and that’s what I want to do.

“I’m always positive. What I have said is that it is not about my situation but what the team do and I’m really happy that we’re top of the League. Personally I’m still confident I can play for this club and every chance I get I will do a job for this club.

“It’s now November but any moment things can happen. If they do, I’m ready and I’m not thinking about anything else.”

Bendtner is a piece of shit that doesn’t deserve to play for the reserve team leave alone wearing the arsenal Jersey.

I very much doubt he could read!

Good man Tommy. As an added bonus as everyone knows, Tommy is a cyborg and thus immune to the common cold, bugs and flu.

Seems his stomach is still human though… dat diarrhea…

I’ve said this before but he looks like Spartacus from that show on Starz.

I’ve always thought he could move into a defensive midfield position to offer a different option – he did always love to move into that area when playing!

no thanks…..he is a central defender, not a midfielder
he wont have the same influence in that position and he is too old to change his game
Wenger just has to get his rotations rt…..no need to play Kos n Mert into the ground…..Verm should get the same chances as those two even more so now that he seems to be coming back to his best

stop with the vermaelen as DM comments! we finally have real DMs to play that role (rather than crab-person side-passer denilson or alex ‘I am a through-ball specialist’ song), so why waste one of our few CBs in a position that we actually have cover for? remind me who plays if, Bergkamp forbid, we are hit with injuries in the central defense?

Thus is the league, were gunna need him eventually. TV number 5. He’ll be back

While he did play well yesterday, especially considering his form that caused him to be dropped, it did highlight how similar Vermaelen and Koscielny really are. We need to buy a defender to cover for Mertesacker.

i would say vermaelen is sort of halfway between koscielny and mertesacker… in addition to that, he and bacary sagna are what we can call complete defenders, and that’s why both are indespensible to arsenal…

Excellent reaction by thomas! Excellent captain! Did very well yesterday, he’s just got to fight his way back in the team. All the best!

Good lad, what fantastic attitude. As fans all we can ask is that the players give their best and care about the club.

After all the players who’ve just chucked it in when things didn’t go well (e.g. Denilson, Santos, and now arguably Bendtner), it’s refreshing to see somebody willing to fight for their spot. Doubly so since TV is the club captain, and the fringe players should learn from his example and be willing to stand up and be counted.

He was fantastic the other day. Even though we lost, all I was thinking about is that there is no way Utd (or any ‘big’ team) is going to score from open play against us.

Some folks are stupid. Jsut coz Flamster had a few good games they thought Arteta was expendable. Similarly just koz-of Laurent/ Per they think TV5 can go. We are very lucky to have him in the team. He hasnt put a foot wrong since the game at WHL. [And yes he played in the run in after that]. Hes a genuinely great player to have in the squad. First we hype him then we bring him down. He wasnt as good as some of the hype during his absence. And he isnt half as bad as some people think he… Read more »

i always love him, and know he will get his way back to wnger starting eleven.

He makes me nervous. He the polar opposite of Per. He’s doesn’t read the game or position himself as well a the German, and Koscielny is a much better attack dog than him. That’s where in lies the problem. He’s not good enough to win a spot back, so is he going to be content being third choice here? I think him or Kos are off in the summer. I know who’s I’d prefer to keep. I hope Arsene sees it the same.

Great attitude… but please lay off the free-kicks!

Hope he’s stays, competition is good for players, he would walk into most teams in the premiership and with injurys and suspensions he get his fair share of games

Guys we need a striker in January is was thinking Thierry Henry he would be good for giroud as he could influence him and he can let giroud have few games to rest and also dat cunt from Denmark doesn’t need to ply!!!’