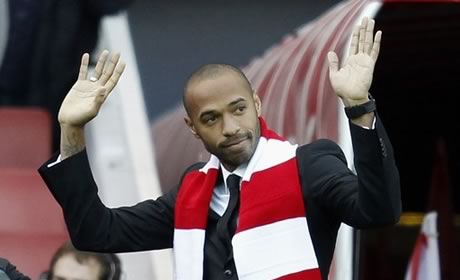 As is becoming something of an annual tradition, Thierry Henry is back training with Arsenal as he maintains his fitness in the MLS off-season.

The 36-year-old, who made 30 appearances for the New York Red Bulls before they were downed 4-3 on aggregate in the MLS play-offs by the Houston somethingorothers at the beginning of the month, was captured by the Gunners’ in-house photographers wearing the vacant number 2 on his training gear, sporting a nifty hat and smiling in a bemused manner at Emmanuel Frimpong.

While the Frenchman memorably signed on loan two years ago, scoring a couple of tidy goals against Leeds United and Sunderland along the way, he’s very unlikely to be pulling on the match shirt in anger this time around although his cheerleader/sage-like qualities will no doubt be very welcome in the camp.

Arseblog News is speculating but we wouldn’t be surprised if Titi also has a role to play at some point in the promotion of Arsenal’s new kit-deal with Puma. Sponsored by the German sportsbrand himself, he was pictured in what’s purportedly next year’s strip alongside Bacary Sagna and Olivier Giroud at a photoshoot a couple of months ago.

For what it’s worth we also wouldn’t be surprised if he gets involved with the unveiling of Dennis Bergkamp’s statue which is also due in the coming months.

Still a dude. Welcome back anytime.

We are a striker short.. I bet he can still latch on to an Ozil through ball and curl it in the bottom corner…..

As a player coach! If Giggs can do it so can The King!

Except Giggs has been playing high level football continuously, whereas Henry has been in the MLS for 4 years. I don’t doubt his skill, but maybe his fitness to deal with the intensity, Giggs is constantly substituted and only plays once a week.

I wouldn’t call the football Giggs has been playing ‘high level’.

Everytime Thierry is back training with the Arsenal, that majestic feeling is back. Welcome back, legend! :’

Return of the King

King Henry was a big part of why i chose to support the Gunners when i was a little kid….Still see him with the same awe as i did when i was young! #COYG

Best cover for Giroud we could ask for until January window.. sign him up and ship bendtner wherever he pleases!

Osi
Reply to  Wizard of Oz

He would be the best player there as well, sure he’s out of this World

He would truly be TGSTEL on Mars.

Can we sign him up on emergency loan for a month? I mean, January is still a month away and let’s be honest, he’ll be a MUUUUCH better option than Bendtner.

only positive having him around, but i just think it would have been better keeping all these legends around, like manu did with giggs scholes etc.. pires vieira henry…… all these players know how to win and that would have rubbed off on our youth, shame they didnt retire with us

Would be good if he could cover us from now till the end of december when we can get someone in the window. As we’d have to wait till then to get him anyway, we should still be buying a long term option.

With ozil, genuine good feeling around the club/team, he just had to get in on that!

My ovaries have exploded, and I’m not even a woman.

I get goosebumps whenever he returns. Welcome home.

It always brings a smile to my face and warm feeling in my heart to see Thierry in an Arsenal jersey! The French players especially must be happy to have him there too.

“He may be cast in bronze but he’s still capable of producing truly golden moments.”

This will live with me forever.

The statue is STILL better than Bendtner

It must be hard for players with regard to age. I’m 39 and I’m just as good at football as I ever was.

Make of that what you will!

A 36-year-old Henry is still going to be more effective as a sub than Bendtner.

I’m confused… I thought that was Linford Christie?

*side issue
I know it’s got an Arsenal badge on it, but seriously Puma?
What is up with the top Giroud’s wearing?

No reason not to sign him up while he’s available.

Why oh why do people keep insisting this is Linford Christie?

After Henry’s loan spell back home, Theo started getting more confident in front of goal and I remember him emulating The King with his calmness and finish. Sweet memories.

we are gone for good

Fuk the loan deal. All i see is permanent

The Artist formerly known as DangerMouse

Much as I loved the man a small part of me always resents how at the very end he angled for a move away. Is this wrong of me ? Probably. But I’m odd like that.

The best striker of the Premier League era. That Balon D’or trophy is a joke as TH never won it.

Come back buddy – age ain’t nothin’ but a number!

how nedved and cannavaro won the balon d’or ahead of king titi is beyond me. A joke of an award to appease those twits at fifa

Damn right! Nedved was the Modric of his day.
Thierry was the Hendrix of football!

So here’s our striker in January!:D

We miss his pace up front. We use to break up field with frightening speed because the main man up top was a speed demon.

Will be difficult to find someone that combines similar speed skill and intelligence.

Well come back, but not in me country, if u do get a statue, I have to cut off your hands

Henry is so fantastic he could come to my house, drop a deuce in the toilet, not flush, and say nothing by way of apology, and it would be fine with me.

Imagine Thiery coming on as a sub instead of Nicklas against ManU won’t he score ‘that’ goal.. He has a very good killer instinct..