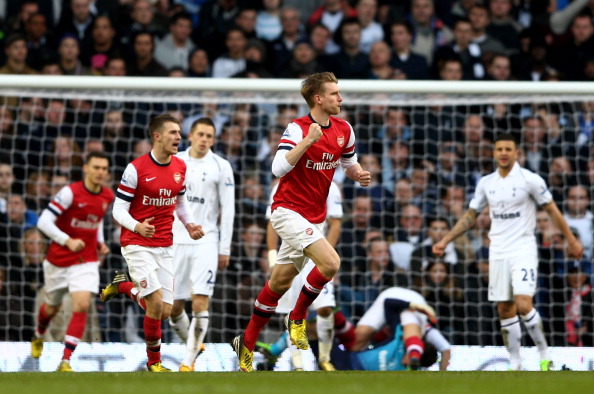 Arsene Wenger has confirmed that Arsenal have begun talks with Per Mertesacker about a new contract but stressed that with 18 months left on the BFG’s contract there’s no rush to thrash out a deal.

The German centre-back, who joined the Gunners from Werder Bremen on deadline day 2011 for around £8 million, took his time settling into the cut and thrust of Premier League life but after an injury-marred first season consolidated his first team credentials last term by forming a very solid partnership with Laurent Koscielny.

Starting to earn the plaudits he deserves (apparently you have to score the winning goal against England to get noticed by most of Fleet Street) the 29-year-old is likely to be offered a two-year extension which would keep him under contract until 2017.

Speaking to the press ahead of the game against Southampton Wenger remarked talks were in ‘progress’, and that, “he has 1 and a half years left so there is plenty of time.”

Arsenal recently tied down Wojciech Szczesny to a new long-term contract although long-standing squad members Tomas Rosicky and Bacary Sagna are both free agents at the end of the current season. As is Wenger himself.

Rosicky and Sagna to come

Yeah and forget that Gaffer Wenger we dont need him….

Who is that lying on top of Hugo Lloris in that picture?

Most likely hfb shoving his dick down a chickens mouth

haha – surprised you got thumbed down for that one goonies.

That is exactly the thing that stands out in the pic.

But, but, the pace, what about the PACE?

Has everything I’ve ever known about football been a lie?!?

Lock it down Arsene.

Then lock yourself down, and Bac & Rockstar-rosicky

good news.Please do the same for Sagna and Rosicky.we really need them for their true spirit.Their contract extension will also make us more stable and strong.We have to learn from Man U as they are known to stick to their old and experienced players as long as possible.Both of them may not be regular starters in the future but still we really need them in the bench and can use them in times where experience is needed than speed and talent.come on you gunners!!!!!
“Arsene knows”

Looks like the guy is trying to bone Lloris’ back… finally, a spud with spine.

if you are talking abt the guy who is on top of Lloris, its an arsenal guy

It’s ok to have sex with a Spud harsh, once your on top!

Contract talks ongoing between the BFG and the Arsenal as Per usual !!

then we would never get rid of Park

Cheers floda,
I needed a laugh!

Per has been amazing over the past year and has really adapted to the Premier League. I don’t want to sound biased, but is there another CB in the league currently better than him? Even Koscielny has made a few mistakes this season but Per has been on top-form for a long time.

From what I remember about him, he needed most of a season to really settle & has just been a rock since. Absolutely quality signing & you feel a real gooner. Get him on a five year.

ahh extend him.
I mean his contract.

Has anyone seen Ozil lately?

This news has me Per-ing with contentment…

*Gets coat and leaves…

How do you know when Per is in form?
He’ll Per-form…

Per-fection – The result of Per’s affection.

Per-jury – The act of sitting in judgement against Per.

Per-sist – The act where Per heads from the near post across goal, for Kos to head it into goal.

Okay, i’ll stop now or the bricks coming my way will make me Per-ish.

A team full of leaders

Anyone still not fighting for the win each game 110%?
How about you explain why to Mr. Flamini?

Should never have bought him. Scott Dann would’ve been much better…

Yeah, and to think that for only twice the price we could have snapped up Cahill. He’s an England international and everything.

I wouldn’t have minded the Aussie one. He’s got a bit of fight in him.

Pers a hero no doubt. I know it would never happen, but the thought of rosicky going to west ham in January makes me feel physically feel ill, please sort it out wenger and co

Hey guys, there’s this German guy, Peter Meatsacker or something, I hear he’s a really good defender, we should definitely sign him.