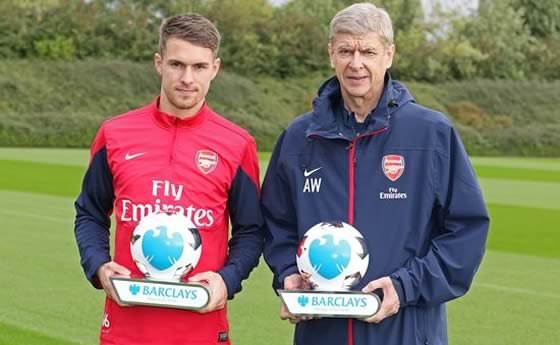 Arsene Wenger has praised the character of Aaron Ramsey after admitting he worried about whether or not to start in him in certain home games last season.

Even the biggest Ramsey fans would admit that his form was poor for a period, but the Welshman became a lightning rod for greater frustrations and was certainly written off by sections of the fanbase.

However, his desire to keep going and to play his way through that spell has paid dividends as he’s now the most confident man alive and, possibly, the most in-form midfielder in European football this season.

That spirit is something Wenger touched on yesterday, saying, “We always saw that he had a good engine. He has another quality in that he does not hide to take the ball – and when he makes a mistake, he doesn’t hide again. For me that is a quality. He is always available to take the ball and play.

“When their own confidence is down, of course they are in trouble. But he is a confident boy. But you have to give him credit for that transformation – the credit goes to him because he could deal with that. He could come back, never give up and convince everybody that he has the needed quality.”

And while some will give props to the manager for believing him and his talent, the boss is keen to give to all the credit to the player himself.

“You have to give him credit for that transformation – the credit goes to him because he could deal with that. He could come back, never give up and convince everybody that he has the needed quality.”

It’s still an issue which prompts a lot of ‘told you so’-ing, and Tweets from certain loud-mouthed celebrities who got it wrong … so very wrong … it’d be good if the divisiveness could stop and folk just enjoyed the resurrection.

Wenger is a deep person. He looks for those things we would normally assume and with his intellect enables you to see meaning.

“he does not hide to take the ball …..when he makes a mistake, he doesn’t hide again. For me that is a quality”

Agreed. Makes the point even greater when you look at the likes of Bendtner who is posing away his talent.

and the swimming pool door

Gotta love the Welsh Jesus! I happily admit I got hugely frustrated by him last season but never have I eaten more scrumptious humble pie!

I’m not even going to pretend, i was one of those that didn’t believe in Ramsey.
I’m glad i was wrong.

Which loud mouth sleb could you possibly be speaking of?

I had so many barnies with mates about his ability to cut it, so to them I would just like to say – I told you that my opinion was different to your opinion, however my opinion was markedly less wrong than your opinion. With respect.

Normally. Unless I’m dealing with the fuckers that are meant to collect my bins.

I hate those cunts. Not the cunts that are supposed to collect your bins, but the bin cunts in general. I’ve had countless rows with them because they keep, you know, not collecting my bins. Even though I’ve paid and stuff. And they seem to think this is just unfortunate. The cunts.

On the subject of sticking with Ramsey, I have played a lot of FIFA 13 over the past year and started well over 20 fresh career modes as Arsenal manager, with the usual clearing of deadwood in the 1st transfer window. I have bought and sold well over 500 players, including Wilshere, Giroud, Szczesny, Cazorla etc. but I have NEVER EVER sold Aaron Ramsey in any of those careers.

I always said to myself when doing this: “Son, one way or another you are going to be the superstar you deserve to be…”

It’s all down to you!

I know right? I should have got the most useless cunt of the month when Ramsey got his player of the month. I shall write the FA a strongly worded letter about giving credit where credit is due…

actually, in FIFA Manager 13, i have played him regularly and he developed explosively just like this. He actually won the player of the season award.

Sorry to thumb you down Harsh but you’re a bit of no-it-all knob.

Jacky and Rambo will be like our xavi and iniesta. Bet fabregas wants to come back. So do Persie and Nasri.

I’d welcome Cesc back, but Van Persie and the chinless cunt can go fuck each other – not that there’s anything wrong with that.

The wrongness comes with what I’d like to see them fuck each other with.

Who wants van Judas and Na$ri back? Fuck then both

Indeed, in the end it has been pretty good letting go of those who doese not want to be here. UTA!

Ramsey has proven a lot of people wrong and now we, the same people who moaned at his presence in the team sheet, are enjoying his success. I, personally, didn’t think he was terrible but there were times when I wanted him out the line-up.

I’m just really happy for him now and it makes you realise how fickle we as football fans are. Not generalising, as there were some who believed in him from the start. Just, well done Aaron. Well done.

Hail Ramsey, full of grace
The blogs is with thee.

Let us all enjoy the resurrection of the welsh Jesus, amen.

There should be an apology banner for Ramsey at one of our home games. He had to put up with some real shit and even asked us to be patient.

Let him serve as lessons to us.

1 – Be patient with the younger players.
2 – Our respect for Wenger IS justified. He DOES know

I will say I always had faith in the Welsh Jesus. He is young and had a horrible injury.

Ramsey never hid, and now he’s handing out the hidings.

[eternalflamini has now left the building]

All of this lavish praise should be tempered by the fact that Ramsey was God-awful against United. Simply awful. Basically the Ramsey of old. He passed to them more than he did to us, with at least two or three egregious give-aways, one in our defensive third. I’m glad Aaron has played so well in the attacking third this season, but he still has many limitations. I wouldn’t expect pollyanna Arsenal fans to acknowledge this, though.

OK, apparently he was fantastic against United. Not sure which game I was watching. My mistake.

First off, he wasn’t that bad. Second off, the team was entirely off the mark. He was also playing with the flu. Did you also per chance catch the Marseille match? MoTM easily.

I’m guessing that this is a lame attempt at trolling because you simply can’t be an Arsenal fan and post drivel like that.

Looks to have the makings of a Gerrard. Can’t wait to see if I’m right