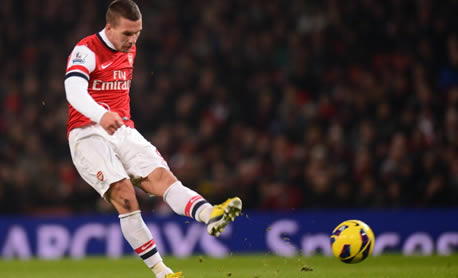 Lukas Podolski is edging closer to competitive action after more than three months on the sidelines with a grade three hamstring tear.

The German international suffered the injury in the Champions League second-leg qualifier with Fenerbahce back in August, just days after notching a brace against Fulham in the Premier League, but looks set to make a long-awaited return to full training after Wednesday’s game with Hull City.

Speaking this morning, Wenger told assembled press that once Poldi is back with his teammates:”It will take a least a week for him to be considered [to play].”

The 28-year-old has been working hard in the gym at London Colney throughout his rehabilitation but looking at the fixture list he’ll realistically be aiming for the games against Man City and Chelsea in a couple of weeks time.

He’s kept himself busy has Lukas, as well as popping back to Cologne at every opportunity he’s also found time to stalk celebrity popstars including Miley ‘Bentdner’ Cyrus and Celine Dion, taken part in an impromptu Q&A session in a London pub and watched Arsenal beat Dortmund with travelling Gooners.

Not bad…but no doubt the prospect of playing with mate Mesut Ozil will top all that.

You’ll know podolski is back when that left-footer doesn’t find the net and ends up in your living room….

I thumbed it up thinking he said ‘through the net’ to my living room. Damn!! I should live my life in regret now.

Oh people got this all so wrong….

He shoots to score but when he doesnt hit the target that ball is coming to your house.

Raekwon The Chef
Reply to  Heroldgoon

How can you possible say that. Podolski has the best finish in our team.

With that attitude we will never win the league,TWAT!

Good thing he’s not actually in the squad, or it might actually affect something. I actually thought it a big amusing, although much more appropriate would have been joshing on Giroud missing the goal and killing someone in the upper tier. Can’t confirm anyone’s actually died yet from a wayward Giroud strike, but I’d put money on someone feeling complete and “letting go” after spying him through binoculars.

All he is saying is that Podolski can kick the s*** out of the ball.

Remember his shot power is a 91 on fifa

AHA! Welcome back Poldi! Go and score some goals from Ozil assists!

Goldi Poldi Hallelujah! The bloke is bonkers – and I fucking love it.

Easily the most interesting person in the team!

It’ll be good to have him back… He’s a decent (non-bendtner) back-up for HFB.#aha!

smh
Reply to  The AWenger

Indeed. However, Poldi and Giroud are two very different players. I see Poldi as an alternative in the striking department rather than a backup for Giroud. In terms of accuracy and power of his shot, I would even cautiously argue Poldi is better than Giroud.

Poldi is much more of a poacher than Giroud, he won’t win as much in the air (though he’s no slouch the HFB is like a ball magnet) but with Özil feeding him the ball it might not matter.

But I’m pretty sure Giroud has the poacher trait on FIFA.

There’s no doubt that Poldi is more lethal than Giroud in front of goal, everything else not so much but the extra pace and guile in his movement tend to make up for it, especially with the guys he’ll have behind him now.

“In terms of accuracy and power of his shot, I would even cautiously argue Poldi is better than Giroud” Is there even an argument? While Giroud is better at holding the ball up and bringing others into play, Podolski’s finishing is probably the best in the entire squad. The problem with Poldi in the striking position last season was that he played as a CF in games where we had very little of the ball and relied heavily on the CF winning those aerial duels which Poldi was never gonna be able to do. So he ended up having very… Read more »

Poldi has started training full time and hopefully he will be fit enough to play after Napoli game, good news for Arsenal

it says that in the article, yet you got 20 thumbs up?

I think Podolski and Ozil could prove to be a really amazing combination when he returns to full fitness. They’ve been playing together in a very successful German team ever since Ozil made his debut, and I’ve always gotten the impression that the German national team’s style is one of the closest out of all clubs and countries to ours materially and aesthetically, though that might just be me. Not sure exactly how many games they’ve played together but Ozil has 54 caps and Poldi more than 100, so it’d certainly be a few. Would be interesting to see the… Read more »

I think we try to counterattack like them, but retain some of our pretty passing when it’s the better option; ’twas difficult when the team didn’t know which to do and when but now it looks like it might be working out.

No mind the gap jokes plwase!

Zorro in the Box

I hope all that strength training has been preperation for him to play in the central strker position.
It wouldn’t make sense working on your upper body for wing play

Wouldn’t be the first time Wenger converter a winger to a striker!

Ha – no, it wouldn’t. Feel that Poldi can play that position well though. Absolutely thumper of a left foot.

True enough, but those Wenger did convert were young and had time on their side. Teaching a successful maniacal 28-year old German international will be different.

Yay! Sometimes this season (it hasn’t been as often or as annoying as earlier seasons though) when we’ve kind of over-passed it I have wished for Poldi to be out there, just taking the ball and smashing it towards the net with no regards for human or goalkeeper-safety. Great to get our squad even deeper with quality.

Hopefully we’ll not be seeing much more of Bendtner on the bench. Looking forward to having Poldi back. I may be in a minority but I thought his first season was pretty good: plenty of goals and assists. Great option to have from the bench or for rotation.

Fed up of pundits saying we only have Bendtner as backup to Giroud and forgetting about Poldi (who is more than capable of being just a backup). Let’s have a look at the checklist:

It’s only because he’s been injured mate. A bit like Sanogo…

The German thunderbolt is back! Christmas has come early.

Does anyone know if the Tube Strike is still on tomorrow night? Trying to plan how to get to the Emirates if it is. Thanks.

Ride a bicycle. I will bring a lock and you can you can lock it to mine.

It’s been cancelled for tomorrow

the best word here is “imminent”

Poldolski will be LANS!
Hopefully he will bang in some goals, now that the team is creating so many chances.

Great news, he’s back, the OX not far off being fit, our squad will be much the better for exmas, and run in, bring it on you guns

i can feel, there’s going to be some games coming up soon where several players click and we really hand out a pasting to another team

Wouldnt it be great if he’s next goal is celebrated with a big ‘Ah-ha’ from our fans. 😉

Relishing a good partnership with Ozil, better than giroud

I bet Poldi is going to come back on the field like a Wrecking Ball..

haha, made my morning. thanks for that.

While our goal scoring record has been above average this year he should be a great addition when he steps back on the pitch. Adds a huge amount of finishing capability to the squad. That left foot is gonna be hammering home a few of the BIG Ös magically delicious passes.

his shots are wrecking balls

That’s gotta be a winner! Anyone? Anyone out there…?

Be nice to see him come off the bench against citeh. Get his left foot behind the ball and cannon one in off nasri’s ego. Who wouldn’t enjoy that?

Podolski. Up top for us with Ramsey and Ozil off his shoulder. Not as much hold up play maybe but slightly better pace on the break and more direct with a very hard shot. Which is why Wenger does believe we may be able to sustain even without another striker in January. This particularly as we may incur opportunity cost if we sign another striker on (with us yet to shed Bendtner and Park). There will be good players possibly available in the summer. OTOH, the timing of Poldy’s return is slightly off. Ideally we would have preferred him back… Read more »

cant wait to see that combination