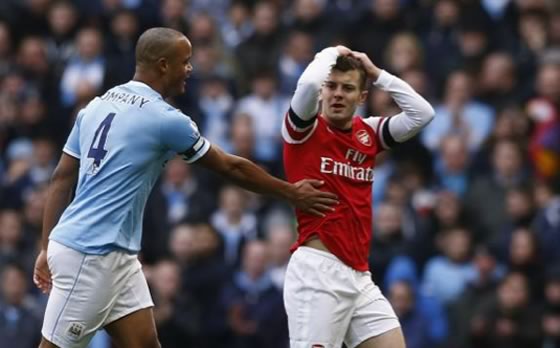 Despite challenging the decision to suspend him for two matches, Jack Wilshere has been banned for the Gunners next two matches.

Arsenal had hoped that the precedent set by banning Luis Suarez for one game for the same gesture to Fulham fans in November 2011 would work in their favour, but the new FA Disciplinary Panel are keen to crack down on this kind of behaviour and have doubled the punishment.

Of course they’re not that keen on cracking down on things like nasty challenges that seriously injure players, or high profile England internationals telling referees to “F*CK OFF” repeatedly, but it’s an odd world we live in.

We can only assume that this is now the baseline for this kind of offence going forward and other players will receive the same ban if they transgress in a similar fashion.

Wilshere now misses Monday’s clash with Chelsea and the trip to West Ham on December 26th.

Unfair if Suarez only got 1! But honestly I think he and we would benefit if he focused on getting back to top form now if he’s not playing!

Kompany takes your hands off Wilshere.

I think Kompany was telling him to calm down

Good. Hope he will learn from this and perform better on the pitch next time.
It’s disappointing to see a player who had a good rest played such a poor game.
Wilshere needs to do more talking with his boots rather than his fingers.

Come on Jack! I bought your number 10 kit cause i believe in you. Don’t let us down.

Ridiculous decision by by the FA, but not surprising really. Their stupidity knows no bounds and it’s laughable in the irony of how they accused Sepp Blatter & FIFA of incompetence.

As for Wilshere, I just hope he learns from his mistake and works hard to get back to his best. He only has to look towards Ramsey to see how it’s done.

FA by name FA by nature.

Its ridiculous tbh. 2 game ban for flashing the finger when many have got away with much worse offences. Yaya being the recent one.

A simple question to the F.A should be this.

then see them shit themselves as they struggle to find an answer. the F.A are getting away with such arrogant decisions and you wonder are they even credible or are they just some unqualified fat lard arses playing god with footballer’ careers

Well you said it at the end, They aint elected, they are,not just in our cases, absolutely fucking useless. Stitch up (some) of their England players and then expect them to give their all. Much as we despise him, if I was Cashley I would have told them to fuck off years ago and of course his mate JT did just that.

Usual FA nonsense, miss the challenge that could have broken Giroud’s leg, but punish the guy who momentarily flashes a sign to the crowd. While we are on it, worried by the number of Gooners on here giving Jack abuse. In past years, when others were jumping ship, Jack was the hottest prospect in England and could have doubled his salary going elsewhere. Instead he re-signed last year with the absolute minimum of fuss. Right around the time Theo’s agent was in the press every day trying to drive up his value, Jack signed for five years. Remember the FA… Read more »

i stick up a finger to the FA, go ahead and ban me too, fuckers

So did Giroud at the xmas party, hope that doesn’t count!

Would u look at that, TV5 himself got wiser after time on the bench.

Not to mention two smashing (important) goals against Marseilles

I long ago gave up expecting any clarity, fairness or logic from The FA. They are the worst offenders at bringing the game into disrepute; I wish they’d give themselves a 12 match ban, lol.

As for Jack, many have said it. I understand his frustration at his performance levels but he needs to focus on his game and channel that desire positively. Hopefully the ban will help him find that focus.

We can take positives in that Jack will be well rested for the tight fixtures ahead. It might help him get back his form.

What a complete bunch of incompetent fuckwits the FA are! It is for exactly this reason our international team is going to the dogs and exactly the reason I have given up watching England. The FA are setting completely the wrong example here: everyone knows swearing is wrong but it’s the dangerous tackles that need to be stamped (forgive my pun) out too.

I’m starting to think that FA stands for “Fuck Arsenal”.

This is the part where we are supposed to condemn the F.A for being such malignant cunts right? but i for one think if your mother or father can’t teach you some manners then the UNIVERSE will conspire to do so.

Boy needs to learn and grow up. even though i doubt 2 weekends will fulfill that, i suspect it will help.

@TV5 Dont forget that wilshere is not bigger than the team. He shows us loyalty because the club has faith in him. I think that it is fair he got 2 games ban so he can learn how to behave.

I wouldn’t suggest for a second that any player is bigger than the team. I just can’t help but feel that at the time we needed Jack more than he needed us. We had seen our top talent walk, it was looking like Theo was going to follow. Our form was very inconsistent and those that like to knock us were predicting our demise. I think we all know that there were teams out there with deeper pockets than us and Jack was a very highly regarded prospect. There was no showboating, no nonsense, the deal was done. I really… Read more »

I dont know about u guys, but as much as I like Jack he better be founding consistency on his performance soon or else he could be the next Vermaelen on the bench … Number 10 , captain, nothing matters if u r not giving your best on the pitch… Let’s hope the kid get back on track soon… We’ll need everybody at their best!

Thank God its not 8 matches.

Probably would’ve been if he wasn’t English.

Deliberately break someone’s leg-3 match ban. Scream abuse at the referee from 3 feet away – no punishment. Deliberate professional foul stopping potential goal scoring opportunity. yellow card. Finger up to the crowd – Suarez 1 match ban. Finger up to the crowd – Wilshere 2 match ban. So if you’re an Arsenal player, you twice the punishment of that given to a player from another club for the same offence. Despite no injury being inflicted, an Arsenal player gets 2/3 of the ban of someone setting out to damage a fellow players professional career. Absolute genius from the halfwits… Read more »

has anybbody seen arteta dressed as zorro ? you should, its hilarious : http://instagram.com/p/iGrTW3uJ2C/

Jack just took one for the fans. Lets be honest we all would like to offer the city chavs the same sentiments. He is a fan and a superb player despite a drop in form he has scored the most quality goal this season. Guys get off Jacks back he is a gooner and the best English midfielder in the PL and eff off sky sports stop headlining it as breaking news.

ok so jack fucked up who has’nt it’s about learning from this situation and coming back mentaly stronger, shame about 2 game ban he really needs games at the moment form is temporary class is permanent, and he has the best teacher AW

For me – the punishment fits the crime. He shouldnt be doing that on the field. He and the rest of the team should be acting as role models.
I think it should be a low priority when compared to leg breaking tackles, but thats not the argument. We cant whinge – when adebayor slid on his knees to celebrate that goal – we all said he shoukd be bsnned. Same difference – both incedents could incite crowd trouble.

Jack the twitter account son and concentrate on what you do best ,as obviously you have now become high profile for your comments rather than your football skills which has made you a target to be shot down.
You have it in you to be captain of our great club and your country so please please please dont blow it.

Does this mean tottenham are shit?

I dont get this decision. How is showing the finger any worse than a player mouthing a “Fuck You” to the fans or the ref, I might add. If they are cracking down on such behaviour, they need to consider all such incidents. Dont get me wrong, I dont think swearing or cursing is right, but our world is now so de-sensitivised (maybe not a word!), that it hardly matters.
Are they now finally going to stop managers for chewing gum?

Jack has been on a downward curve ever since he was caught smoking. He had one or two great performances but the rest have been mediocre. Sounds like he is well short of match fitness. Give up the smoking and concentrate on you fitness Jack, then you won’t get so frustrated.