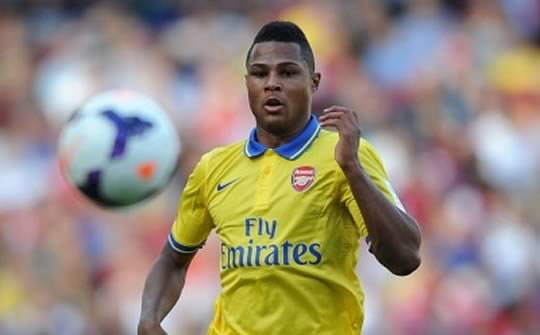 The 18-year-old winger has only been used sporadically so far season but having impressed in starts against Swansea and Sp*rs and off the bench against Crystal Palace has consolidated his credentials as one of the Gunners hottest prospects.

Speaking ahead of Monday night’s game with Aston Villa the boss spoke in glowing terms about Gnabry, whom he awarded a new contract in October.

“We are looking at a guy who has good individual talent, he can go past people, is a good finisher and has a very good football brain with good vision.

“I am not afraid with him. I have shown that against Tottenham – it was a big game. He has convinced many people that he at least deserves another chance.

“He was influential in that game, and until now when I played him he has always had an impact on the game.”

“There is more than a small chance,” Wenger continued when asked if his teenage protégé might be selected by Joachim Loew this summer, “There’s a big chance.”

Having represented Germany at all ages up to under-19 level the prospect of him jumping to full-international status and playing on the biggest stage of them all would represent a serious acceleration in his circumstances.

That being said, young Gnabry is still eligible to play for Ivory Coast and that could play a factor for Loew who won’t want to let such a big talent slip through his fingers. It’ll be interesting to see how the Germans play it,  it’s not like they don’t already have an embarrassment of riches but surely they’re tempted to give him a shot in one of their four pre-Brazil friendlies.

Although I am not the biggest fan of international football and quite honestly would rather see Arsenal’s players rested over the summer so we always have a fit squad (very “club selfish” I know), I’m still going to say I’d rather he didn’t join up with Germany this summer.

I think Serge is an incredible talent but I worry he might end up like Walcott in 2006. If he goes and plays then good luck to him but if he is just going for the “experience” then I’d rather he stayed at home.

Read between the lines. Wenger is using the World Cup as motivation for Gnabry to have a great season with Arsenal. Good luck to The Power Serge!

Don’t be a prat. It’s every footballer’s dream to go to the world cup, even if they’re never used. I would never want to take that away from any player in the world.

And maybe there is a benefit taking a young player just to observe, so he gets used to the atmosphere and world cup pressure, so he can handle it in later tournaments.

I do not understand why so many voted you down , you had are valid points. However i trust the media in germany and Loew to be a tad more intelligent and understanding than their English counterparts. This is no slight on Roy by the way he has proved to be very understanding . I share your fears but Its a worldcup in BRAZIL and wouldnt it be absolutely brilliant to see one of our players shine ,and become the envy of other fans no to mention its a good target for Gnabry and he would he would be over… Read more »

I have more confidence that the German National Team will handle their young talent slightly better than England! If they pick him it’ll be because he deserves to go, if not because he isn’t good enough on this occasion. The won’t dick him around like Sven/Capello did to Theo.

I agree. Joachim Löw has proved already that he’s considerably more sensible than most national team managers. He knows when to rest players and when to use youngsters. He even seems to have a good dialogue with Wenger, which is very rare, as they usually try to ignore Wenger completely (despite the fact that Wenger deals with the player(s) in question every single day, and probably knows a thing or two about them and their fitness.).

If there’s a 18 year old boy i want to see dazzle at the WC it certainly is Serge Gnabry, the diving Manc should fulfill his synchronised swimming ambition at the olympics first.

Arsene knows… He wouldn’t say that without real belief, wouldn’t want to get his hopes up. I’m excited for this boy!

Well if I was Serge and such a World Cup opportunity came, I would Gnab it

Gnot all that again.

So that comment Gnabbed your attention? hehe, I know I know.

Well for him to be picked for Germany he will need a long run of games. Don’t you just love some of the competition for places. Hope he has a stormer tonight just to emphasize his talent.

Earlier this season Loew mentioned that he has his eye on Gnabry, so maybe he had had a word with Wenger as well. It’s a big ask for Ox and Gnabry to fill Walcott’s shoes; many people would consider them better and more confident than Walcott when he was their age, but Walcott is better than them right now. Not sure they will replace is goals and assists between them but it’s good to have that young talent available.

Lets hope he gets picked for Germany rather than Ivory Coast, so that he doesn’t have to disappear to the Cup of African Nations Cup every year or two

Anyway, by the looks of things, Arsene is definitely planning to give Gnarby more playing time. If that’s not the case, it may dampen the lad spirit if he was not selected for the WC and perceived that as due to a lack of playing time or trust in him.
But then again, he seems like a level-headed person, so I may be thinking too much.

If somebody doesn’t tell me what ‘yes session’ is then i’m going to go into the corner of my room, maybe cry but definitely get very angry.

If he keeps up the level of performances, there is every chance he will Gnab the opportunity to get into the Germany squad!

Scroll up and realise you aren’t the first….

Who cares about international football? Actually, if I was German then I would care: our Teutonic friends have an outside chance of winning the World Cup. But for us English international football is a form of perpetual masochism: a constant footballing punishment, handed out by the best in the world. That’s why I don’t care about it. England are rubbish. But young Serge should try to get into that German World Cup squad – he might surprise a few people in Brazil. With Walcott out it’s now time for Gnabry to step up to the plate. Against Spurs he showed… Read more »

In vain.
Reply to  Fatgooner

I care exactly in proportion to how many Gunners play. Otherwise it’s like watching an Allardyce select eleven.

In vain.
Reply to  In vain.

Yikes
Reply to  In vain.

…otherwise it’s like watching a cock balancing on a basketball. Funny, but not football.

With possible wing players like Podolski, Schürrle, Draxler, Götze, Reus, and Müller I doubt he’ll make it… But I hope he does lol

Funny how he is just about getting consideration in Germany. If he was English he would have made his debut the minute anyone mentioned exciting young player and be on about 20+ caps by now. He’d be the first name on the World Cup team sheet, Roy deploying him as a holding midfielder. I think I’ll follow Germany this WC. We’ve got far too many cunts.

Gnözil. What damage this could cause.

From what I can gather “Yes session” is an iPhone app that let’s you “brainstorm” by speaking into your phone, it then gives you positive (no negitive) feedback.

You’re right!
I said to my phone “John Terry and all of his team mates are cunts” and the phone answered “yes”
Now I know why they call it a smart phone.

Dude has been down for 5 minutes… I hope he is ok. But from an arsenal perspective why has no senior player gone over to put an arm around grrr-nabry? Where is rosicky when you need him?