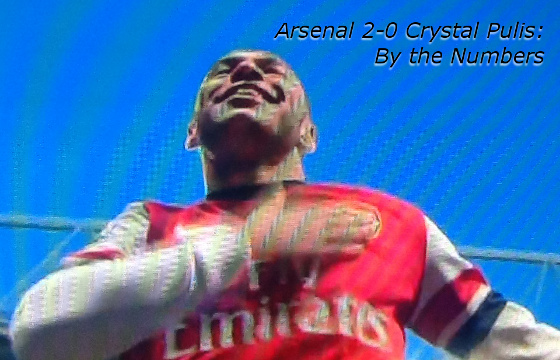 Ox does everything Ramsey does, right down to the back-heel-passing-running-on-to-a-pass-from-Giroud-and-scoring-after-shucking-his-defender thing.

Eerie. But I don’t think Giroud is another Chamakh. Better hair for starters. Also, all round better effort from Giroud.

Arteta in the DM Role

Arteta really benefited from the energetic and attack-minded Ox in the Ramsey role. He also benefited from not having his midfield teammate sent off for a 2-footed challenge.

Arsenal first half v. second half

After Arsenal take the lead they just turn into this barely recognizable version of themselves. It’s incredible. And it works. Arsenal go into their shell and still create chances. The announcers were praising Pulis’ tactic of trying to hit Arsenal on the counter, why don’t they also recognize Wenger for doing the exact same thing?

Give me oxygen cause that was one breath taking performance

or because there is a lack of it t’ward the wit department of your brain?
anyway nice one Ox

It does not matter who praises Arsene Wenger from the press…it took them 2 years and 30 games to recognize that Per and Kos are the best central defenders in the league….

Not to sound like a press sympathiser or anything coz i hate those fuckers but 2 years ago koscienly was not like he’s now. its been a process and he has reached the potential that Arsene saw in him. As for Per it was just a mis-conception coz apparently he was too tall.

They have grown to be the best, they weren’t 2 yrs ago.

Last sentence is amusing. We are working like an German machine. Efficient and effective.

Cazorla brought kozzers long ball down like a Ninja. we all saw it. It was extra nice.

I’m glad you mentioned it. That was unreal.

KM – spot on. Some ppl are still not waken up to that.

Ox’s direct play is what I feared would be missing in Wilshere’s absence. It’s pretty effective technique against tight defences.

‘Clean sheets, Lads, clean sheets!’ The spirit of TA and Don Howe is alive and well.

Ox in the box to box!

Do you smell what The Ox is cooking?

Yo, finally The Ox has come back
Layin down the smack on your monkey crap candy coated ass
Enter the squared circle with the Great One
Most electrifying moves, don’t change the station
Children and their children, they all chant
With the millions upon millions of Ox’s

I don’t care if the press don’t praise AW for his tactical brilliance. All that matters is come may we are crowned EPL champions (you can throw in C.L and F.A cup to), then they’ll say they predicted it.
Also a known fact of life, John Terry is a cunt

Sky bloke: “now you can sit back relax and watch tomorrow’s big game”

I like the “Cry Pal” in the last table. Looks humiliating…

Who has the most key passes in the league?

Lol, ox in this photo looks like Mike Tayson, and surely fought like him today and knocked the pullis tactic down, very nice .

Chamakh had a decent game. Pleased for him and his form this season. Hope he keeps the Palace up. Shame it didn’t work out for him at the Arse.

Literally speaking i’d rather make it at a Palace than in the arse.

I was pleased to see our supporters showing him some respect and affection, too. He came, he tried hard, he didn’t work out, and he left on good terms. Now he seems to be doing all right for Palace. As long as they don’t behave like cunts when they leave, I will always wish our former players well.

Except for the Dutch cunt. I’ll never wish him any luck.

Great game from the Ox. Really good to see him getting on after his injury.

Bit unfair to compare a half a season’s worth of magnificent stats from Ramsey to one game’s worth from Chambo, there’s that consistency thing we gotta talk about and not to mention the assist and goal ratio. But nonetheless its freaking awesome to see that he can fill in in the middle (read: no Flams-Arteta double pivot please) while Rambo gets back to full fitness.

Wasn’t trying to be unfair. Sorry if that’s what people took from that. He’s a young lad and I think the stats show him in a favorable light.

Also defensively Giroud and Chamakh had a similar match. In fact, it might be unfair to say that Giroud worked harder than Chamakh…

Huh… I think… I think Chamakh might have outworked Giroud. What do you all think?

I suppose a lot of those differences are a consequence of Arsenal having the ball a lot more than Palace did.

Chamakh was playing without the ball for 73% of the match, and I’ll bet his heatmap would show that he played in his own final 3rd more than anywhere else. He was basically a defensive player. Giroud meanwhile had the unenviable task of occupying Palace’s 4 central defenders, trying to create space for the midfielders to do something. Didn’t have to do much defensively because we always had the ball. Having said that, I remarked to myself how fit and hungry Chamakh looked. Much more like the player we thought we signed from Bordeaux. The move has done him a… Read more »

Is ramsey really averaging 8 goals and 6 assists per game..that.s phenomenal

Superbowl? Going good so far for me. Arsenal back on top. Seattle spoiling the broncos bandwagon party. And enjoying the food. Only downer, I hate how every American sport has to stop every 2 minutes for time out.

Chamakh is not a bad player as some suggested. Just too bad that Van Cuntsey was at the form of his life that time.

How is it possible that -8 goals conceded and -1 goals scored over last season translates to +17 points??

Very simple really, we conceded a lot of goals in certain matches (6 @ city) and won by a fine margins in some other games.

Indeed. The Man Schitty match was a freakish one-off where every time they touched the ball it went in the net. We certainly didn’t deserve to win that day, but we also didn’t deserve to give up six goals. 2-1 might have been a more appropriate score. And then our goals against would be 12 less than last year rather than 8. Keep in mind that if you take out that one match, then we’ve only conceded 15 goals in 23 matches. Our matured and impressive defence is the reason why we’re top of the table now.

In 2010 Giroud was still playing in Ligue 2, so abit much to hope he was ever going to be a World Class striker. But still, he works hard and contributes alot to the team, and a goal ratio at around 0.5 last season was decent. But so far this season he is down from 0.51 to a 0.44 goal ratio which i find more worrying than how he compares to Chamakh. His assist rate has also gone down quite alot since last season with 0.20 assists Per game, down from 0.33 Per game last season. Or 1 assist in… Read more »

Looks like those numbers should be abit lower since i only did tye Math on tames started, and did not take in to account the games where he came on as a substitute.

And with all due respect and admiration for OG for all the hard work he puts game in game out, anyone thinking we don’t deserve a better striker than him is absolutely deluded – the guy doesn’t get the basics right 9 outta 10 times.. And all his ‘chesting down’ thing seems to be gone too at the moment – a huge matter of concern…

Anytime one voice concern over Giroud, one is automatically downgraded in here. I wonder if anyone Else actually watch the games and follow the stats? One of Giroud strenghts which he is known for is his ability to win most duels he goes in to. For Montpellier he was top 10 in Europe by winning an amazing 77% of his duels his last season there. This season for Arsenal he have only won 47%. Which is down 6% from last season. So he effectively is more likely to lose duels than he is to win em this year. His goal… Read more »

Never mind the haters @Davy, those on Giroud’s side will soon be at his throat when the big games come, scrutinize every inch of his (obvious) lack of certain Arsenal basics (neat and accurate passing, close control, awareness and positioning).. But as I said I have the highest respect and sympathy for what he does as a target man but this “dip in form” and general lack of quality (vis-a-vis his teammates) is alarming as our whole entry into the final third seems to depend on him in tight games.. Sadly, it is not even all his fault though.. I’m… Read more »