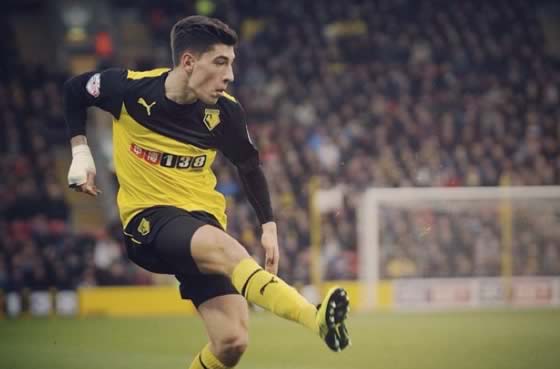 Watford have announced that Hector Bellerin’s loan spell with the club has been cut short and he’s been recalled by Arsenal.

OFFICIAL: Hector Bellerin has been recalled by Arsenal from his loan at #watfordfc. We’d like to thank Hector for his contribution at VR

The young Spaniard joined the Hornets on a short-term basis in November, but last month it was announced that he’d spend the rest of the season at Vicarage Road.

While it raises fears that one of the senior right backs has suffered a problem, it could be because of the injury sustained by Tafari Moore in last night’s U21 2-1 defeat to Reading.

However, that would seem somewhat self-defeating as the purpose of his loan was to gain valuable first team experience.

Bellerin made 9 appearances in his spell at Watford, the last of which came on Feb 11th.

Curse of the new manager at a football club. Sadly didn’t get played.

That’s all there is to it I’d guess. He wasn’t seeing any game time at Watford so what was the point in him being there? Have high hopes for this guy, hope he makes it.

Yep, there isn’t much point in him being there if he’s just going to sit on the bench. Might as well play a bit for us then when Wenger feels like letting him try here and there.

He hasn’t played much lately, only a few minutes from the bench.

Shiiiiiiiit I hope Sagna’s not injured

Sagna’s our warrior. Our guns of the Navarone. This kid will need to come with some gladiator shit to even understudy his understudy! http://www.youtube.com/watch?v=Yhv-AClYEzI is making me feel good though.

Hector Bellerin. There’s got to be a Breaking Bad joke in there somewhere.

If Sagna has confirmed he won’t sign a contract, it could be we’ll see him blooded with the first team from the bench in preparation for him being a potential right back understudy next season

Except when he plays like he did on Sunday?

Sadly, he needs to perform like that week in week out and not just on the odd occasion. So far this season, he hasn’t really taken his chances when given the opportunity.

Didnt we say the same about our LB Options when they stepped up? Silvinho to Cole to Chlichy to Gibbs? If the Corporal is the one to step up, then let him step up. A run of games and he’s ready. He only is shakey when he comes in cold.

This makes no sense to me. Maybe the fact that Bac is definitely off means that Wenger would like to get Bellerin training with the 1st team to be ready for next season?

That was my first thought. I know some people aren’t convinced by Jenkinson, but I must confess that I wouldn’t be unhappy with him as first choice, and from what I’ve heard of Bellerin (I admit that I haven’t seen much of him first hand) he’s got a good future. Given Arsene’s reluctance to bring in too many new faces at once and the likelihood that this summer we’ll also require a new goalkeeper to cover for Wojciech, a new centreback and the striker whom I have nicknamed Godot, I wouldn’t be surprised if Wenger wants the right-back problem to… Read more »

who is this godot and how long do we have to wait for him to sign?

I heard the other day that sagna was close to signing for galatasaray !!

Vermaelen too, I’ve ‘heard’ is close to signing for Galatassary or Inter. We will miss Bacary, much, much more.

Sagna best RB the Arsenal have had since Lauren imo.

well, given that he only has justin hoyte and emmanuel eboue to contend with since lauren, it is hardly surprising

jokes aside, he is definitely up there with ralph

Both of them can do much, much better than Galatasaray. And Fabianski too.

??! Well in that case I guess we would know the motivation. Still hoping for a deal.

I’d say it’s to do with Sagna leaving, maybe Wenger has learned from seasons past not to rely on a player from youth when someone from the first team is leaving.

He is on the bench in Germany I bet

Have seen Bellerin play at The Emirates and he looked pretty decent to me. Should hopefully have a bright future with us.

He’s a great talent. If he’s getting no games at Watford, he’d be better off training with the first team here. Doubt it has anything to do with Sagna. If he’s leaving, we’ll surely look to bring in a ready made replacement such as Lukasz Piszczek rather than promote Jenkinson and Bellerin.

Playing mind games with Bac. Pay Bac his money. Deserves it. Need his experience in the club.

Maybe with Tv5 out for a bit he needs Bac on standby to cover cb if needed and then we would still have two right backs if that situation arose?

The Ox is a fox

the right back position (or even right wing) is one of the positions that need more covers as the fixtures are piling up.

Including two walk-in-park games against the Bavarian boys, we’ll likely have to play 22 games two win the treble. That makes 10 more than Liverpool have got to do from now to the end of the season.

I would rather see bac stay at the club and end his carrer playing at CB. He would be great cover for mert-kos. Also, vermaelen should stay. If you don’t remember, he is our god damn captain for christs sake. And captain he is for a reason. He”ll bounce back, I’m sure. #verminator

He is gonna be on the bench to put off Pep with a few “You remember when…” stories from Barcelona.

He’s probably being drafted in as cover for right back because due to Vermaelen’s injury, Sagna is going to have to be our third choice center back.

bellerin (if he keeps improving) is better in my mind than jenkinson.

Where jenkinson is technically limited and one dimensional, Bellerin carries a threat going forward.

Still think we will need an interim solution when Sagna goes.

Likely possible candidates with PL experience include Debucchy at NouveauChateau and Seamus Coleman, both late 20s with plenty of experience and offensive ability.

This will give us a season or two to either work Bellerin in and/or jenkinson.

Would take Coleman in a heart beat. Not an outstanding player, just does a good job of the basics. Only problem is that the likes of Liverpool, Chelsea and Man Utd are all going to be looking to bring in a right back, so his price will venture into silly territory.

An issue with Jenks? Playing hardball benching Sagna over contract talks? Saving Bac for the FA and Premiership? Backs as wingers both sides to park the bus? The plot thickens… The drama!

Guessing its simply a case of him not getting enough match-time at Watford and he will probably go somewhere else until the end of the season.

Hope so. I don’t really like the sound of any of the above.