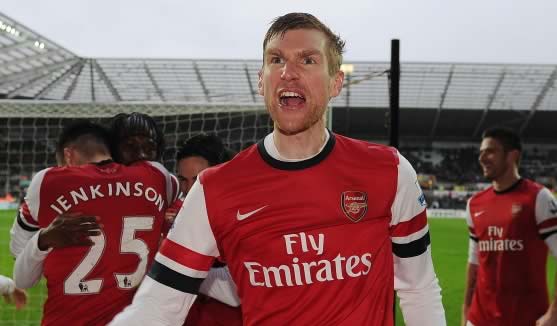 Per Mertesacker says he’s still in discussions with the club over a new contract, but says his desire is to stay at the club and that talks are going well.

The BFG spoke to the Guardian ahead of tomorrow’s game against Liverpool, and is keen to repay the faith of Arsene Wenger. The former Werder Bremen man will have just 12 months left on his contract this summer, but the club, and Mertesacker, are hopeful of tying up something soon.

“We are in good progress with the negotiations,” he said. “It’s up to the manager, of course, but I am really up for it.

“The first year wasn’t that successful but, after that, with how the manager dealt with the situation and helped me to come back even stronger – that is something very special so that’s why my target is to extend my contract here.”

He also praised the influence of Steve Bould on the training ground, especially in light of the team’s defensive improvement.

“Steve likes to work with us, especially with the back four. We are grateful for his influence, his tips and his little hints as to what we might do better in any situation.

“We’ve worked just on details and that’s what it’s about, that’s what really pays off now. From the start, he tried to be an influence. He’s a good addition on the coaching staff.”

Indeed! The pic alone on this article is worthy of a Big Fucking Contract.

Haha! When I saw this article instantly I thought to myself, “Self, the top comment will likely be along the lines of BFG or BFC”.. Sure enough.

He’s got a heart as big as a fucking kaiju, give the man what he wants.

My personal nomination for captain!

We love you Mertesacker! <3

I’m pretty sure the negotiations are going so slowly because Mertesacker is holding out for Wenger to make him captain. I hope.

Shouldn’t a follicle residing in the prof’s nostril be privy to such information? Enlighten us pleaseeee

Random: following Arsecast: If Arsenal are a horse, it’ll probably end up being ‘Devon Lock’.

It don’t half seem like our contract negotiations last forever, maybe it’s the same for all teams but it does seem to take half a season at the very best

Please stay BFG, you are exactly what we have been missing for years!

Get him signed. Who’s our “persuader”? Oh.

Szczesny but he’s not very good at it

Probably want the players focussed solely on our deathrun. why complicate matters with contract talks if can be done over summer for BFG, the way he runs things at the club/ on the pitch I don’t see him going anywhere soon.

Dealing with bacary’s contract is however a priority. surely paying a few million extra to him spread over a new contract would workout cheaper than buying someone to replace him who is fully developed transfer fee + wages would definite be £10-15 mil for a quality rightback.

come on Ivan and co sort it out

I like Jenks’ and Gervinho’s heartfelt hug behind BFG.

anyone know how djourou has been playing at hanover (I think that’s where he went)? always rated him a very capable central defender, one unfairly hounded by a small section of fans for not being the best right back in the world when asked to fill in there.

Fast approaching the iconic status that Kolo and Campbell, Adams and Keown/Bould hold, let’s hope we do everything in our powers to tie this duo down. After years of leaky defences, it’s so comforting to have a solid back five.

Not sure I would put Kolo Toure in the same list. A very capable defender, yes, but not as good as Adams, Bould, Keown or Campbell (who gets extra points for realising his error and making a move over to the best team in London).

I’d say Mertesacker and Koscielny are looking like they can be as good a centre pairing as we’ve had in a while. If they can replicate it next season as well then we may have an amazing partnership on our hands, especially with how football has changed over the years.

Djourou was a lousy improvised right back (which seems to be all everyone seems to remember these days), but a very good center back.

Sadly, he would be 4th choice with us as long as Per Kos and TV5 are around, which understandably isn’t good enough for him.

4th choice CB? I’d happily have Djourou back in the squad.

Problem that I always felt was that Djourou needed a run to have confidence & get into a groove. When he got an injury free extended first team run he looked good, and sometimes very good. However, when he had been out of the team, whether through injury or people ahead of him & he came in for one or two games I always felt he was a liability. Didn’t always pan out like that, but he did have some shockers where his confidence looked non-existant. 4th choice Cb (not something he’d want to accept at any rate I would… Read more »

honestly, he lacks the mental strength needed to be a 4th choice cb for us.

Anyway, Mertesacker is a Gooner, he aint going nowhere.

Metersecker is too slow. Too slow.

Got Sol Campbell from scum, converted some midfielder in Toure, then go some Ligue 3 standard French player in Koscielny. Demechelis is waay better than Vermaelen.

he should have stuck to proven players instead like Squillaci and Silvestre.

Blogs could you please amend the comments policy to ban the use of the term “Silvestre” When I see that word it is akin to receiving a notice of a tax audit. Some of my worst worst Arsenal memories EVER. How can a player be so bad that when he is alone with the ball at his feet you know that we are going to concede a crucial goal as soon as he kicks it. Igor Stepanovs was funny, so useless, he fell over whenever he saw an opponent, When he was on the field it was like we had… Read more »

We need to work on our contract negotiations. Should have extended his contract at the end of last season. Love the BFG world class!!!

Off topic, but does anyone have any idea why Koscielny, Ozil and Flamini all wear plain black boots which feature no logos in training? At first I thought it was because they are with Adidas, but while Koscielny and Ozil wear their boots, Flamini usually wears Nike. I thought it was because they are maybe between boot deals but they seem to wear ‘normal’ branded boots in matches. I also notice that Ozil wore the same boots in training for Madrid. Anyone know?

Sometimes it’s down to personal sponsorships

“Per Mertesacker put through by Laurent Koscielny! Would you believe it!!” 😀

I hate the lazy journalists who say that per and koscielny both had shit first seasons. In my opinion they were both immense since they arrived, koscielny was easily our best defender in his first season yet got slaughtered in the media.
God id love to hear what Stewart Robson would have to say now, still don’t believe Wenger can put together a defense? Still think bouldy has no say in training? Crawl back into your hole you sour cunt!