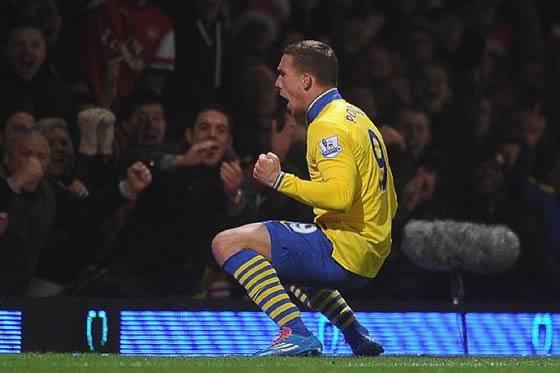 Lukas Podolski says that this Arsenal side has more team spirit than any other he’s been part of.

The former Cologne and Bayern Munich man has hailed the groups togetherness and ability to get beyond difficult situations – of which there have been a few this season.

Speaking to the official site, the German said, “The team spirit is always good here, even after defeats. This is a great team – there’s a good atmosphere between us and up until now, we’ve had a super season. We need to keep that with us now.

“I’ve been at a few clubs and in different dressing rooms but I’ve never been in a team with such a strong spirit. You feel comfortable here – be it on the pitch or off it. You always look forward to being with the team and I think that helps us in matches.”

And with just 11 league games left to play, and Arsenal in second by a point to My Little Ambramapony, Podolski says they’re gunning for the title.

“It’s going to be tight until the end of the season,” said Podolski. “We’ve got 11 games left in the league and we have to try to find a way of winning as many of those as we can and get the points in any way possible.

“We want to be at the top come the end of the season.”

My Little Ambramaponi! Blogs just made my day

Think Poldi is a big part of that team spirit! #aha

Raekwon The Chef
Reply to  Santi cazorlas coming to town

I hope Poldi gets some game time soon, I fear he might leave for regular football elsewhere. I still don’t understand why Wenger has barely played him when we have lost our 2 biggest goal threats in Ramsey and Walcott while Poldi is a proven goal scorer as he has shown in the little time he has played this season. I mean what regular goalscorers do we have in our starting line up? Giroud scores some but isn’t the most clinical striker and Cazorla gets the odd goal but that’s about it.

Did you hear that RVP? What’s the little boy saying now?

The little boy’s can’t talk, his space has been taken away by his good company hahaha

We are lousy, iam a lousy grey haired cunt, we are in a lousy league position and are out of all the cups and the champions league looks difficullt. did i mention we are lousy?”

Looking at the remaining fixtures it will be REALLY tough for us to win it. The game at the bridge is key as I don’t see Chelsea dropping many points anywhere else apart from Anfield, which is offsetted by our game against City (who to be frank I see as being more beatable than Chelsea). It would be fitting if we get a result at the bridge and go on to win. Even if we don’t I’m proud that we’re in the mix till season’s end, a feat which would’ve been laughed at in the beginning of season. I do… Read more »

Not a mug
Reply to  fabulous

It’s a difficult choice. Gerrard might have had a long and illustrious career which perhaps deserves a title. But, I’d rather not those scummy mugsmashers break their golden duck. They may seem all lovely now, having had no CL football for years. But, in my experience Liverpool fans are as deluded as they come.

Excuse the source, but I hope the wheels come off and Everton get 4th.

It’s difficult not to like Podolski as a person and footballer.
I really want him to do well.

Completely disagree. It’s all very well being the funny guy but when Arsene questions his attitude publicly, something that he never does, it’s obvious something isn’t right. When you buy a striker who has countless caps for Germany and Wenger is prepared to play an unproven, injury prone striker in possibly the biggest game of our season in his place, it’s not looking good. And he’s our third highest paid player. Ship him in the summer, he has no role at this club.

False argument. To me Sanogo’s runout had to do with role and playing style. Arsene’s gameplan was for a big back-to-goal target man to bully defenders and provide aerial presence and close down tirelessly. Poldi is an excellent player in my book, but not that style. It is, however, very much Sanogo’s style and more similar to Giroud. Horses for Courses.

The only Olivier is Giroud

Fuck that if we don’t win the league it would have to be Wenger Out!!!

In all seriousness, though, Poldi himself might play a big part in us being champions at the end of the season. And PS., am I the only one around here quietly dreaming of a double? Still clearly focussed on us bagging the FA but after our rally vs the Mugsmashers in the Cup… wouldn’t mind victory at the Br*dge and Wembley to cap off the Double 😀

What an image… Lukas Podolski with an electric guitar between his knees jamming to the old 90s Nirvana tune “Smells like team spirit”.

Cannot wait to see Poldi’s celebrations/tweets/hashtags when we win the title in May!

I can actually see Rosicky doing that..

I can see him being more of a ukulele man myself

Il have what hes on please

Hey Podolski – stop talking and get on with leathering the thing!

Off topic, but does anyone know why the stand / pole keeping Dennis aloft wasn’t made transparent?

Presumably because it would be made of a material easy enough to break therefore allowing thieves to steal it?

Was impressed with the shift he put in against Sunderland. More starts for this man please Wenger.

His attitude defines the team spirit. Where others would sulk, he smiles, plays when he gets his chance and scores goals

Ozil getting shouted at by Per
Ozil and Flamini shouting and pushing at each other v Bayern
Podolski hardly playing
Sanogo and Per fighting in training
Conceding 5 and 6 goals
….yeah, a real barrel of laughs.

It’s a TEAM. You find those things. How they resolve it is what matters. I wish I could get a hidden camera into the dressing room. …not only once. I believe him.

The fighting and shouting can be a good thing. A few seasons ago, maybe a year before he left Cesc said that one of the things he liked most about the club was that nobody criticised one another. Sorry but that’s not a good thing, criticism and fighting (to an extent) are a good thing. It shows they give a shit and if some don’t like it then I’d rather they left. I bet Vieira, Campbell, Adams, Keown etc tore into each other at times but they still had a great team spirit and look how much they achieved. I… Read more »

My little ambrampony, skinny and boney… lol anyone else remember that stupid song? Funny if it was chanted at the chav ground!!!

That pic is perfect for photoshopping a turd being unleashed on the Spurs badge.

Podolski is right about big games coming up, if the team can believe they can salvage pts from games they will,

I’m starting to get pi55ed at these so called gooners who constantly having diggs at Wenger problem is most of you don’t remember the days before he arrived we were not a team guanteed champions league football and finishing mid table was not a shock. Look at man united and what difference a manager can make to a team. The before Wenger reminds me of after fergie. Either get behind the team and manager or go support someone else seriously you will not be missed!

Errrr….George Graham? Remember him sonny…..? He did just fine.

@unyoke the ox
Perfect or should I say Turdfect, that would be EPIC!!!

Poldi – A cannon of a left foot.

Caption: Now I will get time in the Balloon Room!

What I also love about this team is that everyone seems to have their one best buddy or two. The Germans Mesut, Poldi and Per then there’s Theo, Rambo and Gibbo who are best buds, then Santi and Mikel, there’s also Jack and Chessers and then Chambo and Jenko…Lolo and Giroud…I could go on. Nice to see.

Podolski : ” I don’t like parking ze bus, I like to drive mit ze bus …preferably into the opponents goal with ze ball of course.”

Gotta be the Hokey Cokey one !