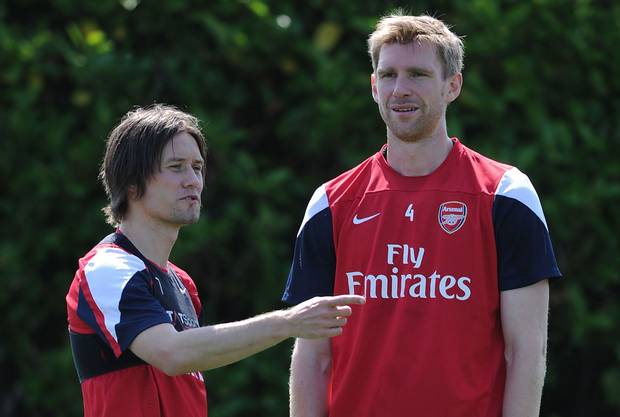 Arsenal have confirmed that Per Mertesacker and Tomas Rosicky have extended their contracts with the club.

We brought you the news last week that the pair, along with Santi Cazorla, have put pen to paper on new deals, but today there’s been official confirmation.

Arsene Wenger said, “We are delighted that Mertesacker and Rosicky have committed their futures to the club. They are players of exceptional quality and experience, and have consistently proven themselves at the highest level.

“There is a great feeling of togetherness and belief in the group and this news will only help to strengthen this further.”

Mertesacker expressed his delight, saying, “It was easy for me to commit myself to the club. I have been here for two and a half great years and feel I have great support from everyone at the club and the fans.

“I’m really looking forward to having more years coming up with this fantastic club. We have a great team here and we all want to do our best to win trophies.”

He also posted an awesome message on his Facebook page.

While Rosicky said, “I’m very happy that I’m staying at the club. I’m proud that I’m still here after a long time and that it still continues. I’m glad I’m here at Arsenal and we’re all trying our best to win trophies for the club and our supporters.”

It’s believed that Rosicky’s deal takes him to 2016, while Mertesacker’s runs until 2017.

It’s good news all round. Cazorla will be announced soon, but no, there’s no news on Sagna so there’s no need for ‘What about Sagna?!’ comments 😉

Just enjoy this on its own merits.

Does this mean a testimonial is in the pipeline?

My Name Is Difficult To Pronounce
Reply to  Viva Vivas

I will get all excited like my sister does when one of her friends is getting married.

Good job AW, Per and Mozart are top players. It is sad to see Sagna going.i really liked his fighting spirit.always he gives 100%. Now it seems impossible to prolong his contract.so sad!!!

LA
Reply to  gunner for ever

All’s not lost. If I remember right the “British core” all signed deals and a few months later when it looked like Theo was definitely on his way out, he signed too. On the other hand that may mean nothing at all this time. Different people’s situations are different, contracts are complex, que sera and all that.

Love that picture on Per’s FB page of a then not so BFG in the old JVC number when he was a kid.

Did Tom get a 2 year extension?? Bravo to that agent!

Good news, but what about Sagna?

My Name Is Difficult To Pronounce
Reply to  Mooo

I love you, ya lovable stupid fuck <3

I think the BFG needs to pay Arsene a visit to collect his fines for not signing a striker in either transfer windows!

You know, I friggen love this team and due to that sometimes they irritate the hell out of me. What can I say, I want them to dominate all the time. But I sure do love days like this, because while these two guys can have a bad game here or there, they are truly class acts and man do they work hard for this club. They aren’t out there making it about themselves or stamping people (of course no specific reference intended there). They are gunners. Happy day today. Well deserved.

Despite the request it appears impossible for most to just enjoy a bit of fantastic news.

So glad you’re staying with us Tomas and Per.

2016 for Tomas too! Highly deserved and highly rated.

Two of my favourite players in the squad at the moment. They play with such passion every time, it’s fantastic to watch.

Great to get two of our best players this season renewed in good (for Arsenal) time. Ominous news that Sagna isn’t confirmed, it would seem that barring some last minute changes of terms he is on his way,which is a real shame. Also suspiciously no Wenger announcement. My guess would be,if we win a trophy a the deal will be announced in the immediate aftermath. Failing that it it’ll be announced during the world cup to give the angry armchairmen a distraction. Or perhaps a sneaky Ferguson style departure?? all eyes on France, PSG and maybe even Barca job traffic.… Read more »

The club is doing the right thing by consoildating our core squad. This is the squad that will take us to the promised land, maybe not this year but this is the one. As long as we don’t lose key players to rivals and keep adding quality (Ozil). COYG

Keeping Per is great news but, not so sure about Rosicky though. Can’t help but feel that we’ve seen the best of him. New younger and more durable blood required I think.

Right, that would give you the opportunity to complain about “you can’t win anything with a bunch of kids”.

My observations on Rosicky are, that most of past 8 seasons have been spent in the sick room or on the bench. And that at the ripe young age of 33 he ain’t worth hanging on to anymore. He’s scored a couple of cracking goals for us this season but it’s unlikely they’ll be worth much come the end of the season.

I’m totally with you. As said we’ll probably again come up short this season, and when, I at least, review the squad to see where improvements can be made the name Tomas Rosicky comes very high on that list with all things considered. The bottom line is he doesn’t score enough, create enough and is too old, and even with his age doesn’t bring any experience of winning. This was an opportunity to address the imbalance of the squad but now has the hallmark of Wenger again being stuck in groundhog day. Bad luck with injuries to Ramsey and Walcott… Read more »

…the Mata/Matic scenario is a good example of the type of imbalances that we should be addressing. We are too heavy in the attacking midfield front (i.e. trying to squeeze too many players into too few positions). What we really need is a big, quick, agile, bruiser who put a bit of stick about, stand on the ball (when required), and put a bit of muscle about (when required).

My take is that, in general, gooners tend to fall in love a little too easily. They need to learn to be a little more flint hearted.

That’s exactly what we need but instead we’ll get Wilshere there who is hopelessly unsuited to the role. Just because he’s a bit spiky doesn’t make him Roy Keane when it’s patently obvious to anyone who’s watched him that his best work is quick one two’s and a burst of pace in the opposition box. Rosicky has, along with Diaby and Wilshere, has become a exponentially better player with each day out he’s been injured to the point where some fan’s see him as some sort of deity. The reality however is that in 130 matches (80 starts) over the… Read more »

Great that Mertesacker has been signed up, but like the comment above its time to cut Rosicky loose. I just don’t see where he fits in the squad, how many players do we need whose preferred position is behind the striker? His inclusion in the squad just cements that other players suited to playing in that position get shunted out to the wing (Cazorla) or played deep (Wilshere) instead of more effective players being purchased for the roles. Unless either of those two are going to be sold for more adequate players, we’re going to see continuation of the shoehorning… Read more »

A mix of both is a good idea, and if said experienced player still runs around like a 20-year-old, all the better.

I can see Mertesacker become a good manager in the future. Intelligent, calm, humble, patient.

Ramsey set to sign on the dotted line as well!

He looks just a taller skinnier version of his 8 year old self. Quite amusing actually. Mad love for the guy

PERfect end to my shite day and weekend.TOMorrow Sagna will sign.
*not even grabbing coat*

Can’t wait for Rosicky’s testimonial! 😀 I’m gonna be there for sure!

So, it looks like our spot for tempo creating, flying ninja tackling, age rule defying piece of fu*king awesomeness is gonna be covered for another two years.

Can someone please tell me what Pers Facebook message says?
My safari browser thing keeps crashing every time I click the link.

I am the same age as Per and that was my first Arsenal kit as well. My mum threw it out after I left home and still denies doing so. Man I’d like to know if the BFG still has his. I think the RVP picture in his bedroom is the same shirt. Bet his is long gone, or his mum has been wearing it to bed every night for the last 18 months.

I like Rosicky and have always felt that over last season or so, he has general more fight in his game. That being said, I would rather we let him go and use the money to make up the difference for Sagna. Rosicky will only get older and his appearances will be sporadic where Sagna is a physically more solid player good to go to 34. Plus there are options in the market at the moment to replace Rosicky with. OTOH, his signing does retain an element of experience in the dressing room, not that Arteta or Flamini do not… Read more »