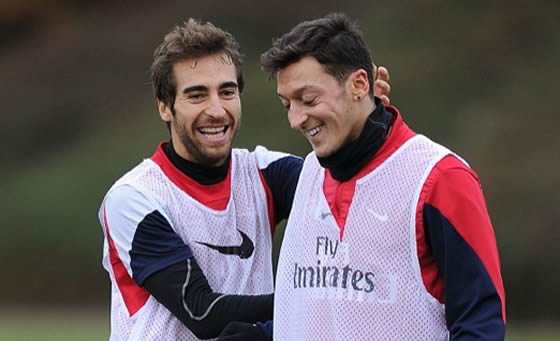 Mathieu Flamini says that although Mesut Ozil is one of his closest friends in the side, and a player of great quality, the team has to find a way of coping with his absence.

Currently sidelined with a hamstring strain, the German is set to miss the next few weeks as Arsenal continue the fight for the Premier League title, and the Gunners have to get through them with the players they have.

“He is one of my closest team-mates,” said Flamini. “He has outstanding quality and has brought so much to the club on the pitch and off the pitch. In the dressing room, he is a very important player. Every time on the pitch he gives so much.

“I’m very proud of him, very happy to have him in our team.

“He’s a player of great quality. We will miss him a lot over the coming weeks but I think the manager will find a way to replace him, even if it won’t be easy as he’s such a talented player.”

The Frenchman also spoke about the importance of winning a trophy this season and what it would mean to him and the rest of the squad.

“Winning titles is very important for every single player, the management team and the fans. We will fight and give everything to win a title this season.

“I’m focused on our team. The Premier League is very competitive, it’s a very open championship and that means every single point is important.

“I would love to win a title, it means so much to the players, to the manager and the fans. We believe we can do it, we will give everything to do it.”

So much for the mountain out of a mole hill the media was trying to play-up!

The bromance between our players these days!. I love it!.

What about Wenger?!? 1000 games. Wouldn’t be magnificent to win at the Bridge and stick that Failure BS right up Mourinho’s home record. If there is a Karma god… Please smile down on us come saturday lunchtime. I beg of you.

Before Saturday we should all dust off the “Return of the Jedi” DVD lying around somewhere in our living room and watch it.

Ultimately, ‘The Force’ always prevails versus ‘The Dark Side’.

THE MOMMENT THEIR STEWARDS OR POLICE COME TO TELL US OFF WE INVADE THEIR STADIUM, FACILITIES, PITCH, OFFICES AND BURN IT ALL TO THE GROUND

Gunner From Another Mother
Reply to  birbicholi

THIS is called a team.
Take note, Manc and chelsea and your bunch bunch of mercenaries.

single bunch’
thats what happens when you take a sip mid-sentence :/

Silly Rambo, flicks are for Gibbs
Reply to  Midwest Gooner

It’s funny cause I keep having these moments where I realise it hasn’t sunk in that we have Ozil and then I’m like OMG WE HAVE MESUT OZIL THAT GERMAN FREAK WTF
Or something like that, but either way I love that we have him.

I know exactly what you mean. Sometimes it feels like we’ve signed him in a videogame and meanwhile, in real life, he’s still at Madrid!

I think I dreamt that I read an Arseblog article that Sagna singed. While that would be great, why am I dreaming about such things? Surely they should involve Jennifer Lawrence or something?

She’d be a great physio for us, at least to rival Chelski’s

I love how much love their is amongst our team. No other team has or will have it.

On another note, hope flamini starts against Chelsea..no offence to Arteta but need some steel in the mids against Matic and Lampard.

To quote Brian Mendoza from about three posts up… why not both?

Cuz that would slow the game down?

why is there a “but” in the title? I was expecting a criticism of Ozil from Flamini. The “but” here is misleading.

I think it was probably done intentionally

its to make fun of the media agenda – every single thing an arsenal player does is portrayed as a symptom of a ‘squad sickness’ or inherent weakness to wenger’s philosophy. Flamini says he loves ozil, the metro/sun/telegraph run that as ‘flamini admits he doesn’t love anyone in arsenal except ozil’. stupid media agenda…

How about diego costa to join with us?

will Kim Kallstrom soon be playing for us?

doubt he will get a start, he might get 1 or 2 sub appearances.

If he is fit I reckon he might get a start someone Maureen might not of done his homework on. might be a surprise package for us.

Saturday will be massive. It will be nice to have Flamini and Ox in front of the back four. With Rosicky, Santi and Podolski in front in a 4-2-3-1 formation.

The Ox is at his best when running with the ball at the opposition. Im not sure having him in front of the back four will be of much use. While he can put a defensive shift in, id much rather have a player with a more rounded game playing with the flame. If Arteta can play in a more advanced role as he had done when playing with Flamini in recent weeks I see no issue with that pairing. It would allow our attacking 4 more freedom in the final 3rd. With Willian and Ramires out it will be… Read more »

He played Lampard last time and he played like a goon. Kicked through legs every chance he got. Wouldn’t be surprised to see that again.

If we can beat the noisy Mourinho and the bridge men right there at their backyard then the premier league trophy might as well become Asenals’. We can do it guys, why not ? As long as Oxlade begins to utilise clear goal scoring chances as he can’t afford to keep waisting them like he did against Tottenham.

Gunner till I die.

Arseblog News doing it’s bit for the click-whore press there!

Sagna will leave, I like Carl but he’s not quite ready to step up to first choice RB.

Who would be a good replacement?

I think he had a Great 12/13 Season…Thought development of Gibbs and Jenko were best things happened to us last season…I think Jenko has what it takes to be our first choice RB…having said that i would love sagna to finish his career at our ARSENAL!!!

From the prem Coleman or Clyne would be nice options, but for the price of Coleman we might as well just give Sagna what he is asking for.
Id love to see us sign Rod Fanni from Marseille just because his name ammuses me, he is too old though. N’Koulou who has replaced him as number one there is some player though.
Juanfran from athetico is also on the old side.
Piszczek is most likely our highest target. In his prime as a direct replacement with a few years still left in him

Debucchy is a good bargain. Seamus Coleman could also be significant. Both are familiar with the league and peak age.

Will give us another 2 -3 seasons to assess jenkinson AND Bellerin.

Personally find Jenkinson a bit predictable and one dimensional. he isn’t up there with the technical side of things. Good heart and strong running aside.

I have a feeling Özil will still assist off the pitch….what a guy…..

I’d never even heard of Özil before September, what a signing!

Heard a rumor that Mourinho and his players in preparation for the game on Saturday were spotted at a bus depot in London practicing how to park a bus.

He must have missed Poldy then who was at the wheel.;)

Somebody please click Dan Gunn over 200 likes… Karma god…classic! i feel like i need to make a worthy sacrifice before Saturday but I’m not sure what to do? One thing’s for sure, if we win on Saturday i think i might go the craziest I’ve gone for a long long time!

It’s going to be a right battle with Chelsea Saturday, we drew the first. Now they have Eto. Going to be interesting how we handle that wiley old goat

Or John Terry in other words.

The media allways nit pick at our players, Ozil is a genius, sometimes overseas players take time to settle, ie henry, giroud van persie, give the msn a break and watch this space. The only way is OZIL.

BS had been great this season, but as many French players do they flop after 30, with AW in his last season, bring in Roberto Martinez and take Coleman

My opinion is we should not start Arteta against quality teams that hustle. He seldom touches the ball and when he does he has to make a quick pass out which is typically to the side which either gets intercepted or puts the receiving player under pressure. Also he does not have the speed to chase down players. For the chelsea game we should not aim to make the game controlled and calm. We should aim to make it a brawl raucous affair to disrupt any negative tactics employed by Chelsea as well as create opportunities for oxlade (our only… Read more »

@Arsenal Fan, I concur that Arteta shd sit out this game. Losing possession from his position (which happens quite a lot) will amout to handing Chelsea victory on a platter.