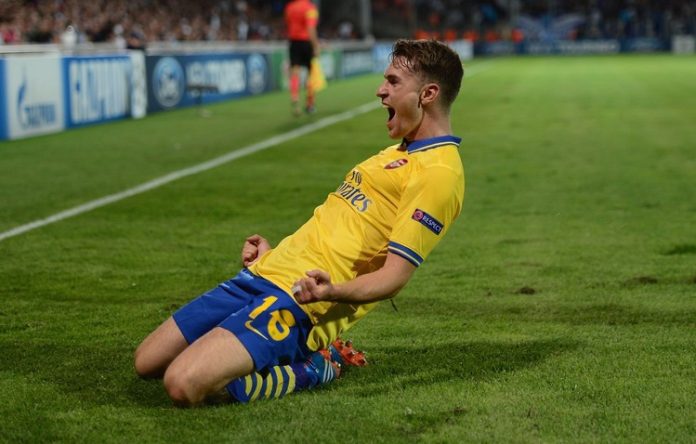 It’s not all doom and gloom in light of Jack Wilshere’s latest injury blow, with Arsene Wenger confirming that both Aaron Ramsey and Kim Kallstrom are just one week away from full fitness.

The Welshman, who hasn’t featured since the Boxing Day win away at West Ham, was initially ruled out for four weeks with a thigh problem but after a setback has spent over two months on the sidelines. Sorely missed during that time his return is a welcome boost ahead of another hugely challenging run of fixtures.

Kallstrom, as has been well-documented, hasn’t yet featured for the Gunners having signed from Spartak Moscow with a back problem.

Speaking to the press ahead of tomorrow’s FA Cup quarter-final with Everton, Wenger stated: “Ramsey is one week away, he should be back for next weekend. Kallstrom as well.”

All going well the pair should be challenging for a spot on the team coach for next weekend’s game away at Spurs.

At last!
Back in time for the Spurs. A true Arsenal player

Best News in over two months! Cant wait to see kallstrom kick a ball for arsenal!

You could say Ramsey is like Arsenal’s Ronaldo at the moment, which is probably why Ozil combines so well with him. And you can see how his absence has made an impact on his(Ozil) and the club’s performences.
Here’s a clip that shows how much of a connection these guys already have
http://www.youtube.com/watch?v=rjmh3tNLYG4

Once for once, please let the full squad be fit. For once, I want to watch our team compete when they are completely ready to face the tests with all the arms firing in the Arsenal.

All in the hands of Bergkamp.

Fans saying wilsheres injury is a blessing in what ever f*cking disguise are deluded! Its all ramsey again, wilshere on a little poor form and he is now a liability? He sould be dropped to the bench? Then what? Do players find form on the bench? Ramsey was played until he found his rich vein of form so why should wilshere be dropped to the bench to find form? For me, wilsheres injury is a massive loss to the club, I just hope ramsey and kallstrom hit the ground sprinting! #speedy recovery jack! COYG!

So one player is more important than the results of the entire team? Wilshere has been shite as of late and needed to be dropped to sort himself out. Him getting injured is just an unfortunate thing which has forced him to do so.

While I think being dropped for a game or two would have been sufficient – 6 weeks is not a break… No one comes back from 6 weeks out, in better form. That’s just nonsense. And what happens if someone else is injured again in that time. No, I’m sorry, there’s really just nothing positive to be taken out of Wilshere’s injury. If Wenger felt that he could drop Wilshere when Ramsey was fit again, I’m 100% sure that he would’ve, mainly because he’s done it quite a few times.

The thing is he (Wenger) has had the option but has refused to drop Wilshere. He could have played:

BUT, he has been playing Wilshere and we have suffered for it. Wilshere has been losing the ball in key positions, getting fouled all too often, not chasing down loose balls and generally been very indifferent and nonchalant, rather he has chosen to complain to the official everytime he has gotten tackled. Good thing he has been injured I say.

Just imagine the colossal bad luck the rest of the squad will suffer when Diaby returns to fitness! Now that’s kack-your-pants kinda stuff!

“as has been well-documented, hasn’t yet featured ”

Nice through ball from Kimmy, get it through the legs of Jan-cheater-Vertonghen, Ramsey on the ball, flicking it over Lloris’s Spu*s face

Thank fuck for that Rambo s back !!!!

Aaron Ramsey = “The One” Neo: Can [ Arsenal ] be saved? Oracle: I’m sorry, I don’t know the answer to that question, but if there’s an answer, there’s only one place you’re going to find it. Neo: Where? Oracle: You know where. And if you can’t find the answer, then I’m afraid there may be no tomorrow for any of us. Neo: What does that mean? Oracle: Everything that has a beginning has an end. I see the end coming. I see darkness spreading. I see death. And you are all that stands in his way. Neo: [ Mourinho… Read more »

Stay away from those funny cigarettes, man.

Come the revolution mate your name’s on the list. I aint having you on my side!

Those Matrix sequels made me rethink the definition of pain. Please please please don’t bring them up here, this is supposed to be a safe place.

Great news about Ramsey – but it might be too much to ask him to hit the ground running straight away and produce that excellent early-season form. But it would be great if he could. Interesting article by Arseblog today. I agree with all of it, but for me the majority of the blame has to go to Wilshere himself. Only jack could tell just how badly he was hurting after that tackle; when he couldn’t run it off he should have asked to be substituted. You would think that a player with his injury history would have been eager… Read more »

Fuck me! FG with a coherent and interesting comment!

The thing with jacks injury is that he didnt even go for ball and instead just dangled his foot in no mans land…….and you know what happens in no mans land! YOU GET HURT!! But anyways I hope you learn from this Jack and I wish ya a speedy recovery. COYG

Arseblog, what’s your opinion on the ox partnering arteta in midfield and gnabry on right wing? We’ll have a lot of pace AND ozil and cazorla will be able to play too!

Ramsey is not fit and why would you leave Arteta out who has been Mr consistent this season. Looking for some Ox and Ozil inspiration tomorrow. This will be the 2nd game I have got tickets for this season- the first was ruined by the red card (Bayern home). COYG let’s get to Wembley!!

Does anyone ever get the feeling that we have more medium to long term injuries to key players than anyone else? From time to time I check in on the Physio Room league table, and we are always near the motherfucking top. Tell me I’m not paranoid, but for the past 7 or so seasons it feels like evry season is punctuated by high profile injuries. Has someone got stats to paint a picture. Physio room table history vs league position or something? Sagna – 2 broken legs Diaby – constantly Rosicky – Constantly. Walcott – Knee, Back Ramsey –… Read more »

There was a league table of injuries on here a couple of weeks back. Someone’s bound to repost it.

This is a good site for that: http://www.physioroom.com/news/english_premier_league/epl_injury_table.php

The Rambo is the Saviour… And this time he’s back with an accomplice, Mr Kim. I see the future… I see it clearly… The league is ours!

wouldn’t it be ironic if Spurs help us win the league by beating Chelsea. That could make very good chant songs. I know the are sht but hopefully they get at least a draw.

So we go into two big matches without Wilshere, Ramsey and Walcott in the midfield (I don’t even consider Kallstrom part of the team yet, for all we know he is a ghost like Park). Assuming Ozil, Carzola, Ox, Flamini and Arteta start the matches (or Rosicky for Ox vs Bayern) that leaves us with Gnabry, Podolski and Rosicky as subs and possibly only Jenkinson as a sub on defense if Monreal is still out and Kos is out. Not the type of squad you want to have available for the run ahead. Ramsey’s return is around the corner, but… Read more »

My Name Is Difficult To Pronounce
Reply to  Mark

Ozil, Cazorla, Ox, Rosicky, Flamini, and Arteta. Add in Gnabry as a wing option (Ox my first choice..) and Poldi as the other; not a bad lot to choose from.

But just imagine the threat if Ramsey and Walcott were healthy. Sigh.

Well Sherwood is a gunner so I wouldn’t put past it that he’ll do his best to beat Cuntrihno.

we are coming for you sp**s

If wenger wouldn’t insist on playing his players into the ground , I don’t think we would get some injuries.

If only he was as forward thinking in the striker department…

I bet Ramsey is absolutely frothing at the gash to get back out there and bang some goals in! Cant wait.

Our answer to a striker shortage and need for a centre back in january. To be fair, if we works out like arshavin did in the short term I certainly won’t be complaining!

This month is so important to us. A lot of big games in a lot of competitions against the kind of opposition we’ve struggled against but and I can’t stress this enough, this is a group of arsenal players we have seen cope brilliantly with this kind of pressure at various stages over the last year. There have of course been games in between where we haven’t quite managed to live up to that but what has been another factor over the last year has been our ability to respond to setbacks. Stoke was huge one, no escaping that, but… Read more »

chris b
Reply to  goonero

totally agree. this is make or break time. Ramsey won’t be in the squad for the Everton game though.

goonero
Reply to  chris b

Yeah 🙁 Hoping for a big games from rosicky and cazorla!

Pace will be important in such games that appear, a big month for arsenal fc, with 2 important cup games nxt matches then prem schedules. Proud to be a gunner.

Great news! Im a bit skeptic about Kallstrom though. He was not playing much for Spartak, so that leaves me wondering what makes him good enough for a place in the Arsenal team. But i will reserve judgement until i see him play ofcourse. Ramsey is just what we nedd to finish the season strong. Very happy about his Return. And i think Wilshere must take most of the responsibility for his injury himself. He must clearly have told the physios he was fine, or Else they would have taken him off pronto. He is a key player in the… Read more »

Hope Rambo 2 makes an equally devastating mince out of the opponents in the final run in.

Have a feeling Kallstrom will contribute in some significant way (likely with his only kick of his loan), hopefully its a positive.