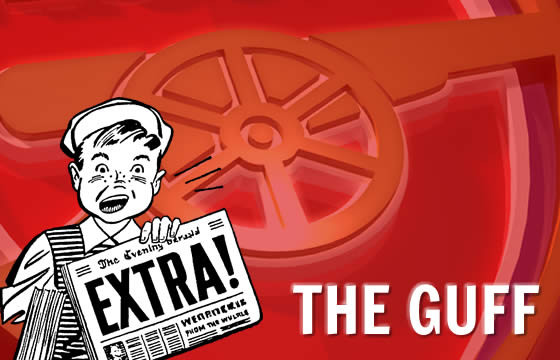 So a 3-0 win over Newcastle last night, here’s The Guff from the blogs and assorted media.

The first of Arsenal’s redefined season’s objectives is almost achieved. Victory here against an accommodating Newcastle United established a four-point cushion from fifth-placed Everton and, by the time his team host West Bromwich Albion on Sunday, Arsène Wenger may already be guaranteed a crack at a 17th successive season of Champions League football with the FA Cup final still to come. This campaign could yet feel productive. – Guardian.

Alongside Ozil, Aaron Ramsey and Santi Cazorla flourish. When the three are together and on song the Arsenal midfield has a fluidity and purpose that shines through once the groundwork has been laid. We struggle without any one of the energy and drive of Ramsey, the vision and distribution of Ozil, and the dancing feet of Cazorla. – Goonerholic.

The three points mean that, for the 19th consecutive season, Arsenal are guaranteed to finish above rivals Spurs. Arsenal fans celebrate this landmark annually, and it has even earned the moniker ‘St. Totteringham’s Day.’ The supporters will be grateful that, this season, unlike each of the past two seasons, they’re able to secure their local superiority before the season’s final day. – ESPN.

Ramsey’s return after an absence of almost four months seems to have given everybody a shot of confidence. The booster has brought his team-mates back to life and they dealt with Newcastle in a manner reminiscent of the football they played in the first half of the season, which took them to the Premier League summit. – Amy Lawrence, Guardian.

My fave moment was Ozil loaning that Gouffran a dummy. Holy shit that was exquisite. My #3 moment was that lazer/rocket of a cross that hit Giroud right in the center of his forehead, whether he wanted it or not. So much to enjoy in that match, even if the Geordies felt beaten by half-time. – Poznan in my Pants.

Arsenal fans also chanted “it’s happened again, Tottenham Hotspur, it’s happened again” to mark finishing above Spurs for the 19th successive season. Lukas Podolski endeared himself even more to Arsenal fans by tweeting his recognition of “St Totteringham’s Day”, the date in the calendar when Spurs can no longer catch them. Spurs now trail their neighbours by seven points. – Telegraph.

Disclaimer: Arseblog News is not responsible for the content of other sites or any of the stuff they might say in the bits that we haven’t picked out that you might not agree with.

I missed the first 20 mins due to tang stupid overground train but the next 45-50 mins made up for that. Arsenal went 3-0 nil without much hassle.

Next year we need to sort our away to big teams form and we will be in the mix for the title.

“My #3 moment was that lazer/rocket of a cross that hit Giroud right in the center of his forehead, whether he wanted it or not”

… always loved the way how Ozil could make the exquisite and brilliance appeared so effortless and nonchalant, and now, an assist could trigger different interpretations on his underlying intend

Maybe the extra zip in Ozil’s rocket pass came from the frustration of Giroud not squaring it to him for the 2nd.

“This is how you pass” whip!

Great game last night. Őzil makes it look so easy that he doesn’t get the credit he deserves. Great performance I thought.

Mr A N Other you are so right.
If we had ‘parked the bus ‘ at Liverpool, Chelsea ,Everton and Man City this season and came away with a point each time the league table would look like this today.

We wouldn’t have won it from those results alone but what a difference.
Everton. 67

I can’t remember the last time we had such a comfortable night, but damn glad it was. Ozil was class, and provides a guile we lacked in his absence. And you can’t wax lyrical enough about Ramsey. Great result, and after the weekend, hopefully we can concentrate on the FA Cup and so shut up the commentators who love banging on about how we haven’t won a cup in how long. They’ll actually have to do their job when that crutch is taken from them.

“My #3 moment was that lazer/rocket of a cross that hit Giroud right in the center of his forehead, whether he wanted it or not.”

yeah Ozil is bad-ass like that, he doesn’t give you a choice, you simply have to score whether you like it or not hahaha.

Ozil is a precision passer. he picked out cazorla as he went on to force a save from krul. not many see those type of split second passes, we’ve missed him no doubt. get fucking in!

@possesion
Not “If we had ‘parked the bus ‘ at Liverpool, Chelsea ,Everton and Man City this season and came away with a point each time the league table would look like this today”

What about lost to Stroke City by 1-nil ain between?…that result would have been more painful and disturbing at least.

I still shudder at the memory of Flamini’s own goal (bad luck rather than bad playing) in the dying moments of our 2-1 game against Swansea. Yeah, it was only two points and not enough to turn the whole season , but losing points that easily always stings! The 1-0 at Stoke also smarts, first just because it was Stoke, and second losing solely on a penalty is hard to swallow.

Some team spent above 100 mil and are 7 points behind us.
Don’t have to say anything else.
Happy st. Totteringhams day to all gooners.

This website uses cookies to improve your experience while you navigate through the website. Out of these, the cookies that are categorized as necessary are stored on your browser as they are essential for the working of basic functionalities of the website. We also use third-party cookies that help us analyze and understand how you use this website. These cookies will be stored in your browser only with your consent. You also have the option to opt-out of these cookies. But opting out of some of these cookies may affect your browsing experience.
Necessary Always Enabled
Necessary cookies are absolutely essential for the website to function properly. These cookies ensure basic functionalities and security features of the website, anonymously.
Functional
Functional cookies help to perform certain functionalities like sharing the content of the website on social media platforms, collect feedbacks, and other third-party features.
Performance
Performance cookies are used to understand and analyze the key performance indexes of the website which helps in delivering a better user experience for the visitors.
Analytics
Analytical cookies are used to understand how visitors interact with the website. These cookies help provide information on metrics the number of visitors, bounce rate, traffic source, etc.
Advertisement
Advertisement cookies are used to provide visitors with relevant ads and marketing campaigns. These cookies track visitors across websites and collect information to provide customized ads.
Others
Other uncategorized cookies are those that are being analyzed and have not been classified into a category as yet.
SAVE & ACCEPT
wpDiscuz
10
0
Would love your thoughts, please comment.x
()
x
| Reply